Remembering Our Veterans and Their Sacrifice 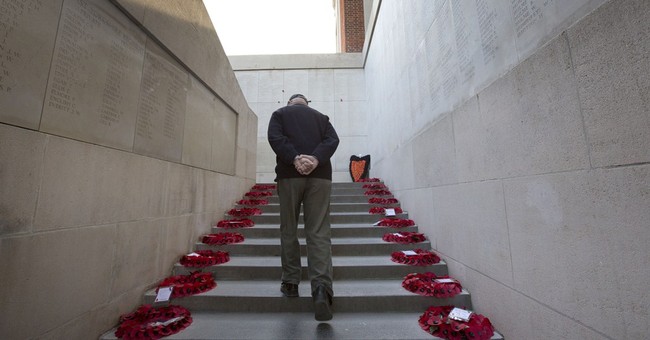 Today is Veterans’ Day, established by an Act of Congress in 1954 to honor the service of all U.S. military veterans. It began, however, as Armistice Day, marking the surrender of Germany and Austria-Hungary and the end of World War I hostilities along the Western Front at “the eleventh hour of the eleventh day of the eleventh month,” 1918.

There’s a sad and terrible controversy that surrounds those last hours of the war. Commanders on both sides had known unofficially for two days that the end would come on the morning of the 11th; the Armistice had been officially signed at 5:00 that morning.

And yet, in the hours of November 11th preceding 11 AM, for reasons that have never been satisfactorily explained, both sides continued to pick away at each other. American forces suffered more than 3,500 casualties that morning. The number of dead, wounded, and missing on both sides that day alone reaches nearly 11,000, exceeding the casualty count from D-Day a generation later. It was a wanton waste of life in a war that had already been won.

For American troops huddled in the trenches in the early hours of November 11th, their war was over – and yet not over.

Today U.S. troops returning from service face a similar paradox – their wars are officially over, but not over, as another heedless government continues to fail them, to leave them trapped in a mess of its own making.

That’s been illustrated starkly in the past six months, as news has dripped out about mismanagement at the Veterans’ Administration that left more than a hundred thousand veterans waiting to receive care – care that turned out to be substandard and waits that sometimes turned deadly.

As on the autumn morning in 1918, our government has left its military men and women waiting for no good reason, and bureaucratic fecklessness has forced too many to pay the ultimate price.

Our government has demonstrated that it won’t take seriously its responsibility to aid returned veterans. When governments fail, though, communities can step up – and should. This autumn, we can recommit ourselves to care for our veterans when the government has failed to do so.

The United States is blessed with dozens of veterans’ organizations representing every possible need – the American Legion, Veterans of Foreign Wars (VFW), and Disabled American Veterans are only a few of the best-known. They all can use both your donation dollars and your volunteer hours, and wherever you live, there’s likely a local outpost nearby.

With the holiday season coming on, there’s also Wreaths Across America, which seeks to lay a fresh wreath on every veteran’s grave each year during the month of December. Every year, they need both financial assistance to purchase the wreaths, and willing hands to help place them. This year, you and your family can join them on Saturday, December 13th at 900 cemeteries across the country to help place wreaths.

There’s also my personal favorite – picking up a restaurant check for a young person in uniform or an older one with veterans’ insignia on a ball cap. The best way to do this is anonymously – your server will be happy to help you in a bit of subterfuge.

Our government has proven over and over again in the past century that they can’t be trusted to care for our military men and women. This Veterans’ Day is an opportunity to cut them out of the equation – to provide support through local charities and personal acts of service. Their government may leave them waiting, but let’s let them know that we never will.