The FCC and Spectrum Policy: Sometimes It Hz So Bad

James Dunstan
|
Posted: Nov 16, 2020 12:01 AM
Share   Tweet
The opinions expressed by columnists are their own and do not necessarily represent the views of Townhall.com. 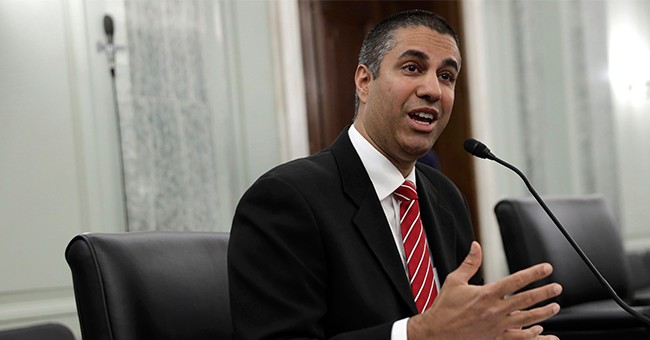 Twenty-five years ago, Nicholas Negroponte published Being Digital. He expanded on what had become known as the “Negroponte Switch,” the idea that the then-current communications landscape was shaped less by the laws of physics, and more by “accidents of engineering.” Not only would we transition from analog to fully digital communications systems, said Negroponte, but information which we had previously received over the air we’d receive by wire, and vice versa. An amazing amount of Being Digital has come true.

To make the Negroponte Switch, the Federal Communications Commission has made difficult choices about spectrum. Spectrum policy is messy and the FCC is often forced to pick winners and losers when reallocating spectrum. Add the current wunderkind of communications technology, 5G (the latest generation of fast digital encoding), and the debate decibel levels go exponential.

“5G,” in many ways, has become the catch-phrase of the decade, much the way “dotcom” was the buzzword of the 1990s. Mention “5G” today and heads turn. If you’re for 5G, in any form, you wear the white hat. Object to anything related to “5G,” and you’re downright un-American. But life isn’t that simple, as is being played out at the FCC right now with two separate bands of spectrum.

First, take the 5.9 GHz spectrum. In 1999, the FCC set aside 75 MHz for an analog technological approach for inter-automobile communication, the Intelligent Transportation System (ITS). It went nowhere (pun fully intended). The technology was never commercially deployed, automakers instead have installed countless safety features that don’t rely on intercar communications like blind-spot detection and automatic braking.

So it makes perfect sense that the FCC is moving forward this week to adopt an order to allocate some of that 75 MHz to 5G deployment, which for all of its promise, gobbles up a lot of bandwidth. The FCC’s proposal would still allow the deployment of new digital ITS systems in the upper 30 MHz of the band, but make the lower 45 MHz available for unlicensed Wi-Fi, a necessity to allow 5G data to be distributed throughout the home. The few incumbent users have naturally objected and now seek White House intervention on their behalf to force the FCC, an independent agency, to throw itself in reverse.

Compare that with another 5G-wannabe: the 12 GHz spectrum. Back in 2016, a group of users had their eye on spectrum reserved for space-to-Earth uses and filed a petition for rulemaking asking the FCC to reallocate the 12 GHz spectrum for terrestrial use. Trying to take away spectrum from space users is nothing new: the original FCC space allocations have been cannibalized for close to 30 years. The petitioners even admitted that their proposed reallocation would massively interfere with the proposed satellite broadband constellations of OneWeb, SpaceX, and others. Their argument at the time was that none of those constellations were in place, or even close to being deployed, and might never be.

Fast-forward four years. There’s been a sudden flurry of filings, with petitioners now claiming that the 12 GHz spectrum could be used for . . . drumroll please . . . 5G deployment!  Except SpaceX has just launched its latest batch of Starlink satellites, bringing its constellation up to almost 800. The company’s broadband service has moved into beta, including providing Internet access for the first time to some Native American Tribes. Satellite-delivered systems hold the promise of delivering 21st-century communications to the “last rural mile,” those portions of America where, even with government subsidies, terrestrial-based systems will never be economically viable. 5G systems in higher spectrum bands, such as 12 GHz, simply don’t transmit far enough.

So let’s check that spectrum policy scorecard again to see whether the FCC should reallocate the 12 GHz spectrum. Unused spectrum – nope, in use. Clear need for the spectrum for terrestrial 5G deployment– a wash at best. The ability of the spectrum to accommodate both sets of users – not a chance. That’s bad spectrum policy. The FCC should dismiss the petition and allow the satellite guys a clear runway to deploy their much-needed systems.

Accidents in engineering may have gotten us where we are today, but good spectrum policy can bring us the full benefits of “Being Digital”— but only if we can put politics aside and let the FCC do its job.

Wait...That's How Many Students Had a Problem With Dave Chappelle When He Visited His Alma Mater?
Townhall
Jussie Smollett's trial might not be going his way as evidenced by reporter's thread
Twitchy
How Low Can Joe Go? New Poll Has Biden Disapproval Continuing to Skyrocket
Redstate
40 Years Ago, Monty Python Predicted (and Mocked) Wokeness
PJ Media