A Response to “An Apology for White People”: The Absurdity of Racial Correctness Exposed

Jack Kerwick
|
Posted: Jun 27, 2017 12:01 AM
Share   Tweet
The opinions expressed by columnists are their own and do not necessarily represent the views of Townhall.com. 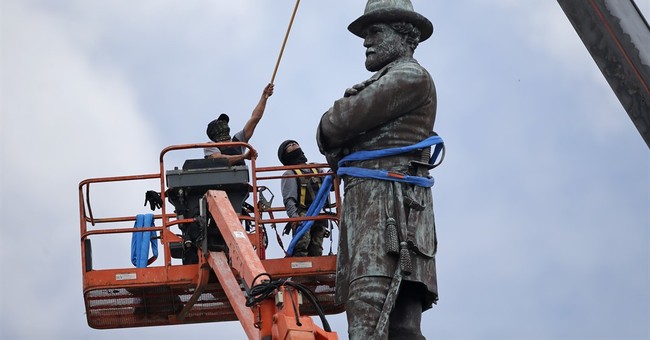 A couple of days ago, a friend of mine from Alabama shared on his Facebook wall an article from Alabama Political Reporter by a Mr. Josh Moon.

The title is, “An Apology for White People.”

Moon, a white man, writes that “white people in Alabama (and other states too, I presume)…like to pretend a lot that the wink-and-nod-racism that’s a daily part of life in this State is surprising to us.”

Besides accusing both “ignorant” and “smart” white Alabamans of being “racist” for telling “racist” jokes and daring to notice the color of those of some of their neighbors who cause trouble, Moon submits as proof of the rampant “racism” of white Alabama the case of Kenneth Nail.

Nail is the mayor of a town called Hanceville who requested of New Orleans that it send to Alabama the Confederate monuments that it razed.  Moon thinks he knows why Nail made this request, and it has nothing to do with “(*wink*) historical purposes,” he assures us.

“Maybe,” Moon says, Nail’s “decision was made because one of those monuments used to bear an inscription honoring white supremacy.”

Moon asks: How can blacks not find “offensive” statues to Confederates, “traitors,” as Moon describes them?  How could anyone not find offensive and hurtful monuments to a man who “kidnapped your mother, took her to a faraway place, routinely raped her, forced her to work without pay or benefits of any sort, denied her an education, beat her often and then discarded her when she became too sick to do the work he wanted [?]”

Only those who are “stupid” or “brainwashed” could fail to “understand the hurt” caused to blacks by monuments to the Confederacy.

Moon’s is a non-argument that wouldn’t be worth a response if it didn’t represent the Politically/Racially Correct orthodoxy of the day.  Due to spatial constraints, let’s just assume that we’re not living in the real world and that Moon’s claims are correct. His own logic (or illogic) turns in on itself.

The men and women of 1776, after all, were as much “traitors” to Mother England as the Confederates were “traitors” to America. (Actually, neither group consisted of “traitors;” they were secessionists who wanted to secede peacefully from the geographical entity to which they belonged, and in the case of the Confederates, that entity was not America, but the Union.)

George Washington, the Father of America; Thomas Jefferson, the author of the Declaration of Independence; James Madison, the Father of the United States Constitution; and Patrick Henry, the man who famously declared, “Give me liberty or give me death!” were all white Southerners who owned massive numbers of black slaves.

Racial enlightenment demands, then, that all cities and states; all currency; all schools; and all statues and portraits to Washington, Jefferson, Madison, and many others must go the way of the dinosaur.

For that matter, the Declaration of Independence and the Constitution should be scrapped.  Can Moon and his ilk be so dense and callous so as not to recognize that in organizing our society around these documents and in treating them (at least rhetorically) with the reverence that we do that we affirm and reaffirm a legacy of “white supremacy?!”

If, say, Lee, who had only a handful of slaves that he inherited and that he freed, deserves no credit for any of his many accomplishments because he was a “white supremacist,” then surely Jefferson and Madison, both of whom traded in slaves and owned exponentially more slaves than Lee ever did, don’t deserve credit for any of their accomplishments.

Quite the contrary: they deserve to be held in contempt and their signature achievements, the Declaration and Constitution, respectively, the products of “white supremacists,” deserve to be junked.

(2) America itself, by Moon’s reckoning, needs to be renamed, for it was America that “kidnapped” Africans, “raped” their women, enslaved them and so forth.

Besides this, “America” was named after the European explorer, Amerigo Vespucci.  Every moment in the daily lives of blacks and “Native Americans” can only be spent in excruciating pain, for they are constantly reminded as long as they reside in America of the cruel treatment to which Europeans subjected them.

The very country of America is a standing monument to “white supremacy.”

Thus, the name “America,” like Confederate statues, must be relegated to the dustbin of history.

(3) The English language must be abolished. The indigenous peoples of this place that we call “America” never spoke English before they were forced to do so by their conquerors.  Neither did the Africans who were taken, against their will, to the New World.

Does Moon not see the “hurt” caused to blacks and reds insofar as they are reduced to speaking the language of their abductors, rapists, and enslavers?

(4) American civilization—its science, technology, commerce, entertainment, in short, all of those of its achievements created by its European settlers and their descendants that have made it the envy of and magnet for the rest of the world—should be reduced to dust and ashes.

Does Moon not see the hurt caused to blacks (and others) who are forced to live with so many constant daily reminders of their abductors, rapists, and enslavers?

(5) The terms “African” and “African-American” are standing monuments to “white supremacy.” We must purge them from our lexicon. The continent now known as “Africa” was never regarded as such by its indigenous inhabitants until the Romans, i.e. white folks, named it such.

And as we’ve already seen, the name “America” derives from the name of the European Christian man Amerigo Vespucci.

Anyone who uses these terms to identify others or self-identify perpetuates “white supremacy.”

(6) As the sociologist of religion Rodney Stark has shown, the very notion of the “individual” is, ultimately, a “discovery” for which the Christian West, i.e. Europe, deserves the credit. Other peoples, like African peoples, have always thought in more tribal or otherwise collective terms.

This in turn accounts for why it was only within the context of European or white Christian peoples that “racism” came to be regarded as a moral offense: Since it is the individual, made in the image of God and offered eternal salvation through the atoning sacrifice of Christ, that is of paramount moral significance, it is immoral to mistreat people on the basis of such morally and religiously irrelevant considerations as race.

Does Moon not see the hurt inflicted upon blacks (and others) whenever someone, like himself, who is of the same color of their oppressors, claims that they are victims of “racism?”  In speaking of “racism,” and treating it as an evil, Moon implicitly privileges the Eurocentric, Christocentric ontology of “the individual” over the non-Eurocentric, non-Christocentric metaphysical-moral scheme of the tribe or collective.

Charges of “racism” are like statues of General Lee and the like in being monuments to “white supremacy:” They serve as constant reminders to contemporary blacks of their abductors, rapists, and enslavers.  The notion of “racism” reminds blacks that their minds have been “colonized” by the metaphysic of “individualism,” the legacy of a philosophical-theological tradition that was foreign to their ancestors and that they would have never imbibed had it not been for the injustices suffered by their people.

And here we have it.  Moon’s position, the racial dogma of our times, is self-cannibalizing. The (il)logic underpinning it proves too much.

Most importantly, it proves just how absurd is the Racial Correctness that Moon mindlessly parrots.