Jackie Gingrich Cushman
|
Posted: Mar 07, 2019 12:01 AM
Share   Tweet
The opinions expressed by columnists are their own and do not necessarily represent the views of Townhall.com. 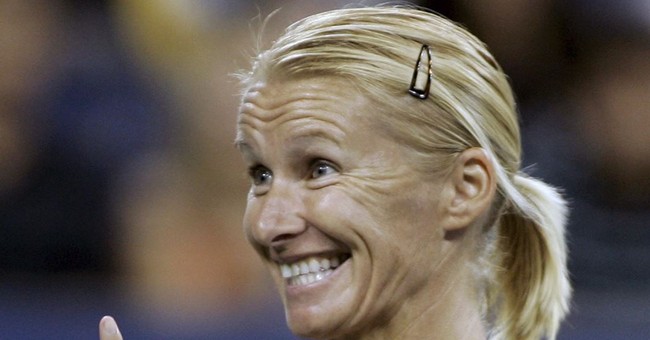 As a mother of two children, one male and one female, I can tell you that there are differences between the sexes from birth. My 19-year-old daughter claims she is 5 feet, 4 inches tall, but 5 feet, 2 inches is probably closer. My 17-year-old son is close to 6 feet tall. He is much heavier and stronger than my daughter. He has coarse hair on his face; she does not.

Yes, some of the strength difference is due to the fact that he works out more rigorously than she does, but the testosterone that puberty has pumped through his body has no doubt made a difference. I know that two simple examples do not a scientific sample make, but we do know that men's low range of testosterone levels are four times a woman's high range.

On average, men grow taller and build more muscle mass and aerobic capacity than women do. This is why women's sports leagues were created: to give women athletes the ability to compete fairly.

This fair playing field for women in sports is currently being upended. Let's be clear: It's not about the acceptance of transgender people in society. It's about fairness in sports competition to women born female. Athletes, fairness, competition and sex combine to make a hot topic.

This came up recently when the International Olympic Committee changed the rules allowing transgender women to compete in women's sports with fewer restrictions. There has been pushback from some Olympians. "At a time when political militancy condenses and reduces thinking to ideological soundbites that deny reality, it's not difficult to identify the trap where sports entities have fallen and which can take away all women's sport," said Ana Paula Henkel, a four-time Olympic volleyball player from Brazil, in an open letter to the IOC.

"We know of sports strength to elevate the human spirit above conflict and war, especially every four years, when, during three magical weeks, we witness that which is best and most noble in all of us. We need to defend that legacy."

Closer to home, some states allow high school transgender women to compete in women's sports with no restrictions (no testing for testosterone levels). Connecticut is one of these 17 states. This policy has resulted in transgender women winning the top two spots in the 55-meter dash at the state level this year. The same two also won the top two places last year in the 100-meter. While many activists support the unrestricted acceptance of transgender athletes into women's sports, is this fair to the women competing against them?

Some parents in Connecticut think not and are now pushing for restrictions based on levels of testosterone.

You may think that this is a fringe topic, but when tennis great and human rights champion Martina Navratilova is jettisoned as an ambassador for Athlete Ally (a nonprofit focused on LGBTQ rights and sports) for raising concerns about transgender women and sports competition, it's time to pay attention. Remember, as one of the first openly gay athletes, Navratilova blazed the trail in sports for acceptance of gay individuals and is a tireless champion of LGBTQ rights.

In her letter, which was written last December, Henkel questioned the IOC's policy allowing transgender women to compete against female-born women. She was branded transphobic and attacked for expressing her concern about the "threat to the virtue of women's competitions that now occurs with the acceptance of athletes that were born men, developed muscle mass, bone mass, lung and air capacity as men, in forms of sport created and formatted specifically for women."

Henkel also wrote about the importance of acceptance of transgender people in society, but raised concern: "The heedless decision to include biological men, born and built with testosterone, with their height, their strength and the aerobic capacity of men, is beyond the sphere of tolerance. It represses, embarrasses, humiliates and excludes women."

Navratilova wrote about this complex subject on March 3 on her website. Her stated her concern that, "There were too many voices that were silenced and shamed into submission and that is not right." Again, while supporting the acceptance of transgender people in society, she also recognized "that men have certain inherent physiological advantages over women. These include height, weight, bone-density and muscularity."

As a society, we have to be able to discuss, question and talk freely about complex issues without being labeled as hateful. This would lead only to suppression of speech. Free speech is a cornerstone of our country and, if not exercised, will fall by the wayside. Fairness is not only accepting, but also making sure that by accepting one group, others are not put at a disadvantage.