John Quincy Adams is Turning in His Grave

Ilana Mercer
|
Posted: Mar 23, 2018 12:01 AM
Share   Tweet
The opinions expressed by columnists are their own and do not necessarily represent the views of Townhall.com. 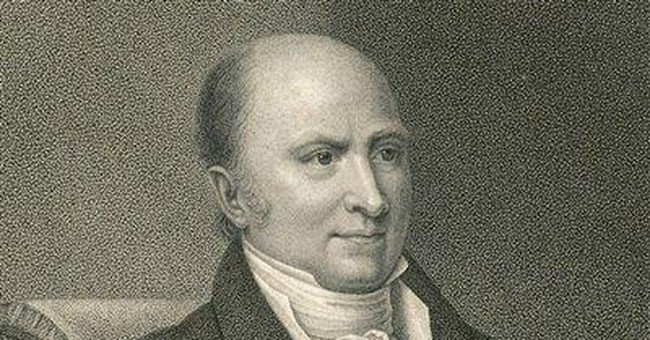 "This is just a truly astonishing moment coming from the White House podium," tweeted MSNBC's Kasie Hunt. Like the rest of the media pack-animals she hunts with, Ms. Hunt had been fuming over President Trump's telephone call to Vladimir Putin, congratulating him on winning another term as Russian president.

Reliably opposed to a truce were party heavies on both sides. Sen. John McCain joined the chorus: "An American president does not lead the Free World by congratulating dictators on winning sham elections," he intoned.

Another Republican, Sen. Chuck Grassley, told a reporter testily that he "wouldn't have a conversation with a criminal. I think Putin's a criminal." "When I look at a Russian election, what I see is a lack of credibility in tallying the results," sermonized Senate Majority Leader Mitch McConnell. "I'm always reminded of the elections they have in almost every communist country."

Actually, what the International Election Observation Mission found in Russia's presidential election of March 18 was far more nuanced. Why, in some ways the Russian elections were very American: In the difficulty dissident candidates have in getting on the ballot, for example.

Ask Ron Paul or all those anonymous, aspiring, independent, third-party candidates about the US's "restrictive ballot access laws and the other barriers erected" by the duopoly to protect their "de facto monopoly in America," to paraphrase Forbes.com.

As for jailing journalists, frequently for life: Not Russia, but an American ally, Turkey, is the world’s biggest offender.

What doesn't change is the interchangeability—with respect to any peaceful overtures made by President Trump toward Russia—of both Republicans and Democrats. And yet, the same self-interested individuals protest, periodically, that Trump's recklessness risks plunging the country into war.

The president wants to cooperate with the Russians. International confrontation being their stock-in-trade, the UniParty won't countenance it. Politicians in both parties have not stopped egging Mr. Trump on, rejecting the détente he seeks with Russia, and urging American aggression against a potential partner. Yet, incongruously, in October of 2017, Republican Senator Bob Corker saw fit to complain that the president was "reckless enough to stumble [sic] the country into a nuclear war."

To please and curry favor with an establishment that detests him and is vested in the geopolitical status quo—POTUS even signed sanctions into law against Russia.

Cui bono, pray tell? Who benefits from this standoff?

General Barry R. McCaffrey has The Answer. The Trump congratulatory courtesy call to Mr. Putin shows the president's refusal to protect US interests, tweeted the general.

"US interests" or your interests, sir? Who benefits here? Ordinary Americans, or the media-military-industrial-complex; the swamp organism Dwight Eisenhower warned about in his farewell address: "The total influence – economic, political, even spiritual – ... felt in every city, every Statehouse, every office of the Federal government ... [of] an immense military establishment and a large arms industry."

Not to mention the attendant barnacles who suction onto the ship of state: professional TV talkers, think tank sorts, self-anointed intellectuals (who’re not very intelligent). All are vested in an American-led order, so long as they get to dictate what that (martial) order looks like.

The same political flotsam "argues" against President Trump's desired détente with Russia using the following logic: If the "master of the political insult," Donald Trump, "declines to chide Putin," to quote NBC and CNN standard issue "analysts"—something is off. Ergo, Trump is beholden to Putin and to Russia. The Russians have something on him.

Such a line of "reasoning" fails basic logic, simply because it's inexhaustive. In other words, there are other, highly plausible explanations as to why the president is not warring with Russia, not least that diplomacy is a good thing; that POTUS ran on a promise of peace with Putin; that he had articulated, as a campaigner, an idea entertained by most Deplorables. Namely that Russians are at odds with Islam and ISIS; that Putin is a Russia-first nationalist, whereas our Anglo-Europeans "allies" are Islam-friendly globalists.

Had POTUS kept pressing the perfectly proper positions he ran on, he might have retarded the Russia political wildfire, which is now raging out of control. Philosophical consistency would've served him well as an antidote to the political opportunism around him.

Instead, President Trump has surrounded himself with appointees who deliver a message discordant to his. What comes out of the White House is an ideological cacophony.

Hiring different perspectives in business could well be a strength. But it’s a weakness when politics and policy are in play. Needed to advance a political agenda is a team that shares the political philosophy underlying the agenda.

MSNBC's Miss Hunt and her political clones were particularly galled by Sarah Sanders. The White House press secretary was asked whether the Russian election was free and fair. She replied: "We don't get to dictate how other countries operate."

What’s outraging our neoconservative-Jacobin establishment is that the White House is practicing, if only fleetingly, what another American president counseled in a bygone Independence-Day speech: detachment and diplomacy in foreign policy.

"[America] goes not abroad in search of monsters to destroy. She is the well-wisher to the freedom and independence of all. She is the champion and vindicator only of her own. She will recommend the general cause, by the countenance of her voice, and the benignant sympathy of her example. She well knows that by once enlisting under other banners than her own, were they even the banners of foreign independence, she would involve herself, beyond the power of extrication, in all the wars of interest and intrigue, of individual avarice, envy, and ambition, which assume the colors and usurp the standard of freedom. The fundamental maxims of her policy would insensibly change from liberty to force. The frontlet upon her brows would no longer beam with the ineffable splendor of freedom and independence; but in its stead would soon be substituted an imperial diadem, flashing in false and tarnished lustre the murky radiance of dominion and power. She might become the dictatress of the world: she would be no longer the ruler of her own spirit."

The man who'd be casting pearls before swine today was John Quincy Adams. The sixth president of the United States (1825-1829), son of John Adams, spoke truths eternal on that July 4, 1821.