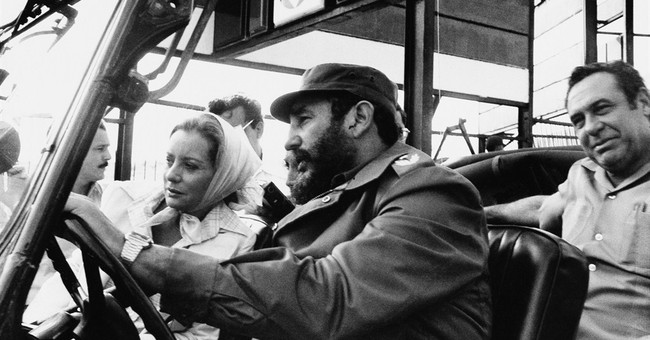 "Instead of his proper name, wherever the words Humberto Fontova appear should be the terms: "SWINE! TRAITOR!...Fontova’s books and columns are nothing but scandalous libels against our Revolution’s founders, Fidel and Che. He also has an outlet for his rants and libels against our leaders at Townhall, alongside tacky blonds and brunettes.” (Ahora Townhall le abre un huequito editorial, en su nómina de vociferantes contra Obama al ladito de chancleteras rubias y triguenas.)

By the way, “chancletera” is Cuban slang that translates literally into “flip-flop wearer.” But think a combination of Honey Boo-Boo’s Mama June and Jersey Shore’s Snooki for the image the Castroites are trying to convey about Townhall’s female columnists. Heaven forbid a member of the Castro dynasty should be caught dead in flip-flops!

In fact, upon a recent visit to New York, Raul Castro’s granddaughter sported Chanel shoes, a Louis Vuitton purse and a Rolex watch. And if you’re wondering how members of a terror-sponsoring dynasty so easily procure U.S. visas from our State Department you’re not alone.

Lately Castro’s KGB-founded and mentored intelligence services have hit upon the shrewd device of setting up bogus Twitter accounts under the names of the people they most fear and loath. Thus they put bogus words in the mouths of their enemies to confuse and mislead these enemies’ followers.

Given that in Fidel Castro’s own words: “Propaganda is vital—propaganda is the heart of our struggle.”

And given that in Che Guevara’s own words:"Foreign reporters--preferably American--were much more valuable to us than any military victory. Much more valuable than recruits for our guerrilla force, were American media recruits to export our propaganda."

And given that according to a CIA document declassified in 1984 titled “Castro’s Propaganda Apparatus:” “Castro’s use of propaganda assets--interviews with journalists, radio broadcasts--during his guerrilla war against Batista contributed in a major way to his victory and was a preview of the methods he would use so successfully after coming to power. Immediately after assuming power, Fidel Castro set out creating a propaganda empire that today is perhaps the most effective in the Western Hemisphere.”

Given the above, those who expose the regime’s propaganda—especially in the guise it usually appears ( mainstream media “stories” often quoting prestigious American “Think”-Tanks, etc.)—such debunkers tend to especially unnerve the Stalinist regime.

Back in 2010 Cuban dissident Guillermo Farinas--who underwent several hunger-strikes to bring international attention to the fraud of Raul Castro’s “reforms” as trumpeted by the mainstream media-- won the European Parliament’s Sakharov Prize for Freedom of Thought. Last week in an interview with The Miami Herald Farinas disclosed how the Castro’s regime’s intelligence had just set up a bogus twitter account under his name. For maximum effect, the initial tweet by the Communist secret police claims that Farinas ‘original (i.e. real) twitter account is the bogus one. So to please start following him on this new “genuine” account. (the one set up by the secret police.)

I now call your attention to a twitter account that suddenly appeared a few weeks ago as @Humberto Fontova. Here’s the identical ploy.

So please be advised, amigos: my genuine twitter account is @hfontova. The @HumbertoFontova (“El Humberto Maximo”) is one set up by Castro’s secret police to mislead my readers. For whatever reason Twitter administration has not seen fit to heed my requests and cancel the bogus one set up by Cuban intelligence.

But hey, let’s cut Castro some slack. He’s shocked and confused and thus furious. He’s just not used to Townhall type coverage of him. He’s much more accustomed to this:

“To my knowledge, it has never been proven that the Castro regime killed anyone.” (Ted Turner to Bill O’Reilly. Dec. 10, 2008)

"The Toast of Manhattan!" crowed Time Magazine regarding Fidel Castro's reception by Manhattan's beautiful people on the terrorist’s visit to New York in 1996. "The Hottest Ticket in Manhattan!" also read a Newsweek story that week, referring to the social swirl that engulfed Fidel Castro in New York by the media luminaries who barely escaped nuclear incineration by his hand. These included Peter Jennings, Tina Brown, Bernard Shaw, Mike Wallace, Barbara Walters, among many others. All clamored for autographs and photo ops. Diane Sawyer was so overcome in the mass-murderers presence that she rushed up, broke into that toothy smile of hers, wrapped her arms around Castro and smooched him warmly on the cheek.

"You people are the cream of the crop!" beamed Fidel Castro to the smiling throng of U.S. media luminaries that surrounded him.