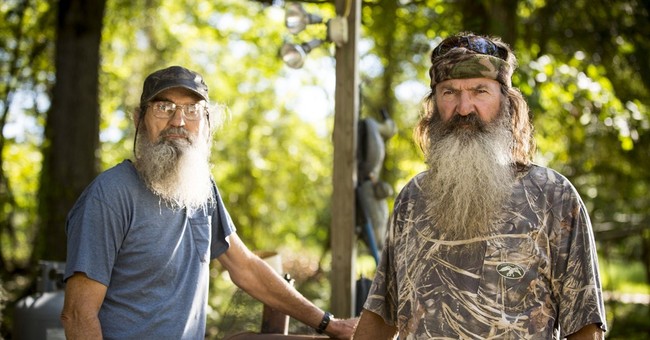 GLAAD needs a makeover. Their Queer Eye for Straight Guy Phil Robertson blew up in their face. Just ask A&E. Not since the young Vito Corleone persuaded landlord Signor Roberto’s to “walkback” his decision to evict the poor widow and her dog (“and the dog stays, right?”) has a business decision been reversed as abruptly, awkwardly or hilariously. We can only wonder what Phil Robertson’s version of “and the dog stays, right?” sounded like to the hat-holding and stuttering A&E executives.

“Who put a book by that filthy f*ggot on my shelf!” snarled Che Guevara (subject of a History Channel glorification) upon noticing a book on the shelf of the Cuban embassy in Algiers in December 1964. The disgusted Che yanked out the book by Virgilio Pinera and slammed it against the wall, while snarling more insults of the sort Phil Robertson politely eschewed in his GQ interview.

Pinera was an internationally-famous gay poet who had somehow prospered in “fascist, racist, classist, macho-ist, etc. etc. etc.” Cuba before its “liberation” and “progressive enlightenment” by the Castro brothers and Che Guevara as hailed by the world’s “progressives” practically en masse.

A year after Che Guevara’s tantrum against “filthy f*ggots!” the regime he co-founded began herding tens of thousands of Cuban men and boys into forced labor camps for the crime of fluttering their eyelashes, flapping their hands, wearing tight pants, talking with a lisp, listening to rock music, etc. Indeed, the regime hailed by rockers from Carlos Santana to Bonnie Raitt, from Stephen Stills to Chrissie Hynde and from Jackson Browne to Jimmy Buffet coined a new term for criminal activity within its Stalinist realm: “Elvispresleyism.”

Tens of thousands of Cuban youths were jailed and tortured for nothing worse than long hair, tight pants and fondness for “Yankee-imperialist” Rock & Roll. Any gay mannerisms made their punishment all the worse. Those Hollywood stereotypes of bigotry and brutality by backwoods American bigots against “long-haired queers! “Dirty hippies! etc.” were indulged 90 miles from U.S. shores by the very heroes of those hippies: Che Guevara and Fidel Castro. The type of violent bigots demonized in Easy Rider, Alice’s Restaurant, Gimme Shelter, Joe, etc. were ruling Cuba with the very brutality that characterize American hippies’ worst nightmares—while being idolized by American hippies!

Naturally, you’d never get an inkling of this rollicking irony from A&E’s lengthy Biography programs (i. e. glorifications) of Fidel Castro and Che Guevara. Your professor probably never mentioned it either. Well, it’s all fully documented here.

"Work Will Make Men Out of You" read the sign at the Castroite prison-camp’s gate, right over the barbed wire and next to the machine gunners posted on the watchtowers. The initials for these camps were UMAP, not GULAG, but the conditions were quite similar.

Nothing remotely of this sort had ever been attempted by any regime in the Western hemisphere, even by any of the major villains who give liberals such recurring fits of the vapors: Pinochet, Somoza, Trujillo, Batista, etc.

Here’s an idea, GLAAD: why not get on A&E for this “insensitivity” not just against gays but against most of your co-citizens? Here’s a few Che Guevara-isms “overlooked” by A&E’s programs:

* "Against those hyenas [Americans] there is no option but extermination!"

* "We must keep our hatred [against the U.S.] alive and fan it to paroxysm!"

* "If the nuclear missiles had remained [in Cuba] we would have fired them against the heart of the U.S. including New York City. The victory of socialism is well worth millions of atomic victims!"

After all, some major “outreach” and “fence-mending” with flyover-America seems in order for you folks at GLAAD about now. Why not go after Che’s hagiographers at A&E?

A&E, basing their Che Guevara Biography on a book written in collaboration with the Castro regime, gushed that: “Che Guevara’s idealism will rarely be equaled.”

During a 1961 speech in Cuba, Che Guevara denounced the very “spirit of rebellion” as “reprehensible.” Earlier he had cheered the Soviet invasion of Hungary and the concurrent slaughter of thousands of Hungarians who resisted Russian imperialism. In collaboration with Soviet officers Che Guevara helped crush a rural rebellion in Cuba itself that raged from 1960-66. Thousands of Cuban country folk were murdered in the process.

Nonetheless the A&E Biography gushed that: “Che Guevara is a potent symbol of rebellion, liberation and resistance to imperialism”

Wilson Cruz was the GLAAD spokesperson who tattled on Phil Robertson to A&E executives: “Phil and his family claim to be Christian, but Phil’s lies about an entire community fly in the face of what true Christians believe. Phil’s decision to push vile and extreme stereotypes is a stain on A&E and his sponsors who now need to reexamine their ties to someone with such public disdain for LGBT people and families.”

Before joining GLAAD Cruz worked for The National Gay & Lesbian Task Force. This same NGLTF honored Raul Castro’s daughter Mariela at the New York Public Library in May 2012 with a forum to spout her regime's anti-American propaganda. Needless to add, Raul Castro's daughter--an official of the only regime in the history of the Western hemisphere to herd gay men and boys at Soviet bayonet-point into forced labor camps and torture chambers--received a standing ovation at the event sponsored by this gay rights organization.

In brief, according to Wilson Cruz, Phil Robertson simply cannot be allowed to express his views (which happen to coincide with a majority of Americans') in a free-market venue. This amounts to "pushing lies." But Mariela Castro must be allowed to spew Stalinist propaganda at New York taxpayer's expense. Apparently this amounts to spreading the enlightenment as reckoned by the National Gay and Lesbian Task Force.

Any questions why so many flyover Americans question the agenda of outfits like GLAAD and The National Gay & Lesbian Task Force?