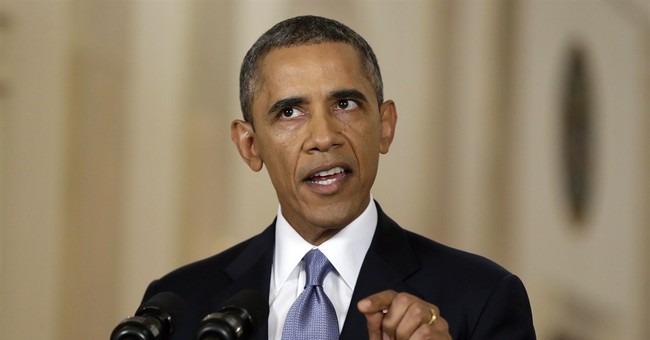 Victor Davis Hanson was the last guest I interviewed in five hours of broadcasting Tuesday that included a dozen different foreign policy experts and political journalists. The consensus is that the president took a terrible situation and made it worse with what Bill Kristol called a “mini-Munich” speech, a continuation and amplification of what Joe Scarborough termed a Mr. Magoo foreign policy. (See also Bill Kristol’s note on the president’s use of FDR rhetoric from a, well, unfortunate period of his presidency.)

President Obama managed to embrace the Bush Doctrine –WMD in the hands of terrorists could threaten America and thus oblige us to act– and the reject just such action in the same speech. The president also disfigured the historical record of W’s gaining Congressional consent to military action, and all but declared “peace in our time,” as he called off the votes in Congress and sent John Kerry off to beg favors from the Russian foreign minister. He thumped a bit when he said that the American military doesn’t deliver pinpricks, but ludicrously so less than 36 hours after Secretary Kerry committed to an “unbelievable small” attack.

On the spectrum of military force between pinpricks and “unbelievably small” strikes, how many gradations are there? Risible, as so much of the speech was.

As one caller put it, the president’s problem is that he had to give a speech with John Kerry’s foot in his mouth. Another caller suggested that the first 2/3rds of the speech was like the “Dallas dream” sequence which POTUS awoke from in time to reverse everything he had said and hinted at doing up until wake-up call arrived mid-speech.

I explained to VDH that I taught the Steel Seizure Cases this morning to my Con Law students at the Chapman University Fowler School of Law with tis famous concurrnace by Justice Robert Jackson that laid out the three “zones” of presidential power –where the president acts with Congressional power, his strongest zone; where he acts and Congress is silent, the middle zone; and where he acts against the will of Congress, his weakest position. I noted to the professor that it appears the president has created a fourth zone, even weaker than the previously weakest position –the situation where the president and the Congress both act against the president’s professed policy abroad.

VDH is of course an accomplished historian, and the prediction he lays out at the end of our conversation is very, very sobering:

VDH: I was underwhelmed. I’d like to think everybody was. He wants to use force, but he doesn’t quite want to use force. It’s going to be substantial, but not very substantial. He really thinks it’s important to consult Congress, but he wasn’t going to do it. But then when he got in trouble, he was going to do it, and then when they were going to vote no against him, he postponed it. He really believes you always have to do it, but of course, he didn’t do it in Libya. And the winner of everything is Vladimir Putin. I mean, he’s Machiavelli. He’s absolutely, in a diabolical way, brilliant, because suddenly, a man with no aircraft carrier group, no Nobel Prize, no big economy, no democracy, is the moral superior to the President. He’s posing as a man who stopped a rash and immature Obama from killing people and breaking stuff. Meanwhile, he stole Bashar Assad. 99% of the people you kill, you don’t need WMD. You just keep killing them. And we’ll talk for the next month about WMD while this naïve in America keeps trusting us. It’s a win-win situation for everybody. And then Obama is reminded by Putin I prevented you from embarrassing yourself, because you would have been turned down by the Congress. He couldn’t have acted anyway. This way, you’ve got an out with my phony negotiations, which have already made you alter your presidential address. And next week, I’ll probably alter it again with a new idea.

HH: Victor, the President also said tonight, “The United States military does not do pinpricks the day after Secretary of State Kerry said it would be an unbelievably small attack. It’s hard to…

VDH: Give him credit, though, Hugh. He didn’t say the United States military doesn’t do shots across the bow. He could have said that.

HH: Well, we’re laughing here, but this is truly horrible. Today, Victor Hanson, I was at a speech at the dedication of the Chapman University Fowler School of Law, delivered by George Schultz.

HH: …preeminent statesman, an amazing man, a man who stormed the beaches of Peleliu, and he…

VDH: Yeah, he’s a colleague of mine at Hoover.

HH: And he’s a magnificent American. He bemoaned the collapse of the post-war order, the sort of Bretton Woods system, the international order, it’s all falling apart, and it’s doing so under the guidance of this President.

VDH: Well, I don’t think that, I think a lot of us that didn’t sign up with Obama on this are Jacksonians. We’re not isolationists, we’re not neocons. In other words, we want to support the post-war order, and that each particular engagement and challenge requires just a simple question. What’s the purpose? What’s the methodology? Is it commiserate with a purpose, and what’s the outcome? Is the benefit worth the cost? And in many cases, it is, and we support our President. But with this bunch, for the reasons that we just talked about, it’s going to be a pinprick, it’s going to be substantial, we’re going to go to Congress, we’re not going to go to Congress, we got to Congress and they vote no, we’re not going to pay any attention anyway, time is of the essence, time is not of the essence. Poor Martin Dempsey, the man who’s going to lead us, the chairman of the Joint Chiefs, his problem is he’s an honest man and he can’t lie, so he keeps going up there in front of Congress and saying you know, I don’t really know who the opposition is. There’s ten different sides. This isn’t going to be easy. It’s going to be worse than Libya. It’s going to take ten years. And then Kerry, no need, he’s a caricature of John Kerry. It’s just embarrassing. And so you can’t sign up with that bunch.

HH: My guest is Victor Davis Hanson, and Victor, tonight, the cadence was so extraordinary. He said he’s going to postpone the vote, he’s sending Kerry to Geneva. I almost thought he was going to declare peace in our time. And on Twitter, I called it his Munich moment, and Bill Kristol rightly corrected me. It’s his mini-Munich moment, because the stakes aren’t that high, yet, except that he embraced the Bush doctrine in a bizarre sense when he said tonight that these WMD could get into the hands of terrorists, and then he proceeded to do nothing to stop that from happening.

VDH: Yeah, except when Bush decided to take us to war, he got a, he did the four requisites you need. He got the American public opinion up to 70%, he got an overwhelming Congressional vote of authorization, he got 40 allies, and he went to the U.N. and made a genuine effort. This Nobel laureate, this work across the aisles sophisticate has about 35% approval for what he’s doing, he has no Congressional support, and just about was humiliated. He has no allies, and he’s not only not gone to the U.N., but before he says he might go to it, he humiliated it and called it hocus pocus. So it’s inept, and all he can talk to, what is he reduced to? He’s reduced to I’m not Bush, I’m not Bush, this isn’t Iraq, this isn’t Iraq.

VDH: Well, I don’t know who Obama is. I don’t think he knows. People have overused this metaphor that he’s Hamlet, but on any given day, if you sign up with him, and you say you know, I want to restore American credibility, I don’t care whether it’s Obama that’s sacrificed it or what, I want us to be respected and, or we’ll have terrible things from the 38th Parallel to the Aegean Sea if we don’t. That’s a legitimate concern. But you can’t sign up with him, because on any given day, Kerry’s going to throw up his hands and say well, we could have somebody give up their WMD, that’s not going to happen, but in fact, it might happen, according to Obama. So they’re going to change and change, because they don’t know, because they can’t answer the question what is the purpose, what’s the means to achieve it, and what’s the result that we want, and is it worth the cost that’s invested.

HH: So Victor, we’ve got a minute left. If this continues on a straight line pattern of 40 more months of this President’s injury to America’s standing in the world, where will be we be?

VDH: I can tell you. Kennedy went to Vienna in ’62, and Khrushchev ate him alive. And he said he savaged me. That’s his exact words. And then we had the Cuban Missile Crisis. And Carter did the same thing – human rights, nobody’s going to die on my watch, no inordinate affair, and they watched it. And suddenly, Soviets in Afghanistan, hostages in Tehran, Communists in Central America, China invading Vietnam. So I would think that what we need to do as a country is brace, get our allies together, get a bipartisan group, and say you know what? We are going to be challenged. As sure as the sun comes up, somebody has looked at this President, and we need to protect the interests of the United States not in an obscure, not in an unessential place like Syria, but somewhere big, big, and I think it’ll be in Korea or Taiwan or with Iran or something. But it’s coming.

HH: Victor Davis Hanson, on that sober, very sober moment, thank you for joining me this evening.