H. Sterling Burnett
|
Posted: Jul 18, 2016 10:20 AM
Share   Tweet
The opinions expressed by columnists are their own and do not necessarily represent the views of Townhall.com. 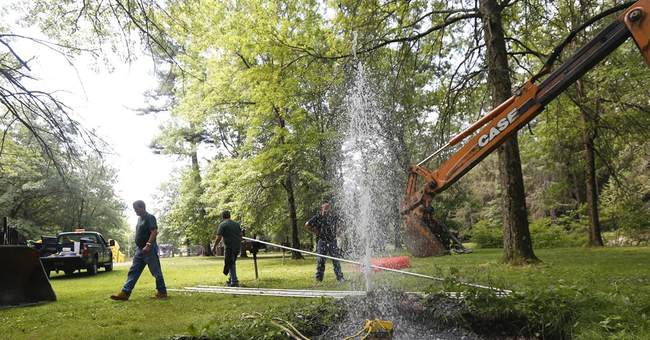 The U.S. Supreme Court ruled the North Dakota-based Hawkes Co., which had planned to mine peat from property in Minnesota, could challenge in court a U.S. Army Corps of Engineers (Army Corps) ruling declaring the  property counted as “regulated wetlands” without first having to go through the costly process necessary to obtain a permit to disturb wetlands. The unanimous ruling has been hailed by property owners, farmers, and businesses across the country as a significant victory for property owners.

In 1972, Congress passed the Clean Water Act (CWA) as part of its efforts to ensure the nation’s navigable waterways are safe for commerce, transportation, and public enjoyment, including fishing and swimming. Though the term “wetlands” is never mentioned in the rule, by the early 1980s, the Environmental Protection Agency (EPA) and the Army Corps had asserted jurisdiction over wetlands adjoining or intermingling with navigable waters—as well as virtually any other soggy piece of ground, stock pond, drainage ditch, or intermittent body of water. EPA often justified its claims by saying migratory birds might use the waters.

Under this interpretation of “navigable waters,” EPA and the Army Corps have essentially asserted jurisdiction over virtually all of the United States, the only exception being those areas that are clearly desert.

Not only did EPA and the Army Corps claim jurisdiction over land not clearly connected to navigable waters, they also argued property owners are not allowed to challenge rulings determining what qualifies as federally protected wetlands until they go through an extensive application procedure required to fill or dredge wetlands. That process often lasts more than two years and costs more than $270,000, with owners facing penalties of up to $37,500 per day for noncompliance.

When Hawkes tried to challenge the government’s determination, a trial court said the case was not ripe for court review because these determinations didn’t qualify as a “final agency action.” Hawkes appealed the decision multiple times, earning support from business groups, including the National Association of Home Builders and the U.S. Chamber of Commerce, as well as 29 states, all of which filed amicus briefs backing Hawkes.

The case eventually reached the U.S. Supreme Court, which determined as soon as the government decides property falls under the Clean Water Act’s jurisdiction, property owners can immediately contest the claim in court without having to go through the wetlands permitting process.

Reed Hopper—principal attorney for the Environmental Law Practice at the Pacific Legal Foundation, which argued the case before the Court on behalf of Hawkes—said concerning the ruling, “Today’s ruling marks a long-awaited victory for individual liberty, property rights, and the rule of law. Everyone who values property rights and access to justice should welcome this historic victory.”

This victory is the latest in a string of cases reining in the federal government’s attempts to regulate property in illegal ways and often for illegitimate reasons. Beginning in 2001, the Supreme Court recognized federal agencies were claiming more power than the law actually grants to them when it comes to jurisdiction over wetlands. Over the past decade, the Court has limited EPA’s authority over non-navigable waters such as isolated and seasonal wetlands so that EPA only has power over those non-navigable waters it can show have a “significant nexus” to navigable waters.

Instead of taking the Court’s rulings to heart, EPA decided to go big or go home in 2015; it issued a rule known as the Waters of the United States (WOTUS) rule, which asserts the federal government has the power to regulate millions of acres of land and water not covered by the Clean Water Act. It does this by simply ignoring the word “navigable” as a limit on its authority.

Twenty-nine states immediately challenged the rule in various federal courts, with Judge Ralph Erickson of the U.S. District Court for the District of North Dakota partially nullifying WOTUS hours before it was due to take effect. Erickson described the Obama administration’s interpretation of the Clean Water Act’s jurisdiction as “exceptionally expansive,” and he determined there was a high likelihood the states would be harmed if his court didn’t act.

Rather than being restrained by the court’s action, Obama administration representatives defiantly announced EPA would enforce the regulation in much of the United States, arguing Erickson’s ruling only applies to the 13 states under his jurisdiction. However, on October 9, a nationwide injunction was issued by the Cincinnati-based Court of Appeals for the Sixth Circuit, which found EPA’s new guidelines are “at odds” with key Supreme Court rulings.

Federal courts should be applauded for finally righting the balance between state and federal powers and defending freedom and private property against illegitimate acts made by an out-of-control government.