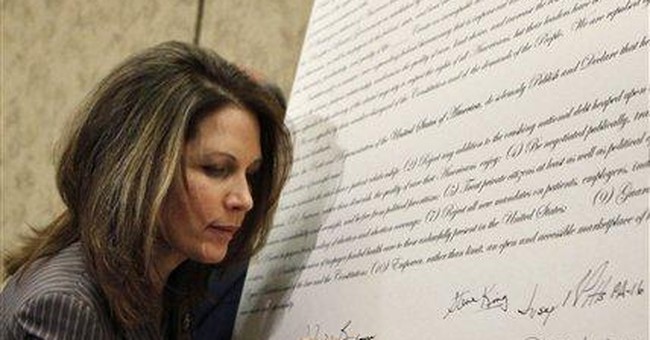 When someone goes to Capitol Hill, it’s usually to ask for a favor. But Babies Go to Congress, an event sponsored by Heartbeat International, is about bringing a message to lawmakers-that pregnancy centers are good for America.

The purpose of Babies Go to Congress is to introduce legislators to mothers and their children whose lives have been touched by pregnancy help centers. It is sponsored by Heartbeat International, a not-for profit whose mission is to provide a support network for pregnancy help centers all over the world, and who recently celebrated 40 years of helping pregnant women.

Heartbeat International brought five mothers and children to meet with members of Congress, ranging from the pro-choice Rep. Chris Van Hollen (D-MD) to pro-life Rep. Billy Long (R-MO). Although the lawmakers views on abortion varied, there was wide agreement that pregnancy help centers are an important resource for pregnant women.

This year’s participants included Sasha Nelson, who shared her story with Rep. Michele Bachmann (R-MN). “When I found out I was pregnant as a result of a date-rape drug, I was very, very terrified and I felt like I had nobody to turn to and nobody to tell.” Sasha described her feelings of panic and confusion, as she wondered who she could turn to for support. Luckily, she stumbled upon the Robbinsdale Women’s Clinic, in Minneapolis, Minnesota. Five years later, she got to watch her son Charlie shake hands with his Congressional Representative.

Peggy Benicke, the executive director of the Robbinsdale Women’s Clinic, says that stories like Sasha’s are not uncommon. “The women who come to us are scared and feel hopeless, like they have no one to turn to”, she tells Townhall. “We talk with her and find out what her situation is, what challenges is she facing. We find the best way to help her and make her feel comfortable, not judged or threatened.”

Sasha’s was one of several success stories. Another came from Ahna and Garrett Roney. They were only 16 when they learned that Ahna was pregnant. Now they are married and have a baby girl named Emma. The Pregnancy Care Center, based in Springfield, Missouri, provided information, classes and support helping them decide what road to take. Garrett called it “their support system”.

“Ahna and Garrett and baby Emma were living testimonies of how young people need long term care and support and education to prepare for parenthood or adoption”, says Cindi Boston, the executive director of the Pregnancy Care Center. She explained that stories like these were ones that lawmakers needed to hear. “They were able to move out of the crisis because of all the help they had. This would not have fallen into place without the help of a pregnancy center.”

Pregnancy center workers do have one request-that lawmakers don’t support legislation that cramps their work. After several unsuccessful attempts to drive women out of pregnancy centers, NARAL and its ilk are resorting to legislative means. Pregnancy help centers rely on a model of informed choice, giving women complete information about adoption, abortion and parenting. This is hardly coercive, but it hasn’t stopped abortion advocates from claiming that it is, and introducing ‘truth in advertising’ legislation, that would require the centers to state that they are not medical clinics. Still, pregnancy help centers are not fazed. “We must be effective to be getting under the skin of pro-choice folks”, says Jor-El Godsey, the Vice President of Heartbeat International.

There’s been a lot of bad news for abortion in recent weeks. From Kermit Gosnell’s indictment for murdering seven live born babies to a string of undercover Live Action videos, exposing Planned Parenthood’s irresponsible response to sex trafficking, the news has been dire. In the aftermath of these terrible developments it’s good to see what positive responses to unplanned pregnancies looks like.