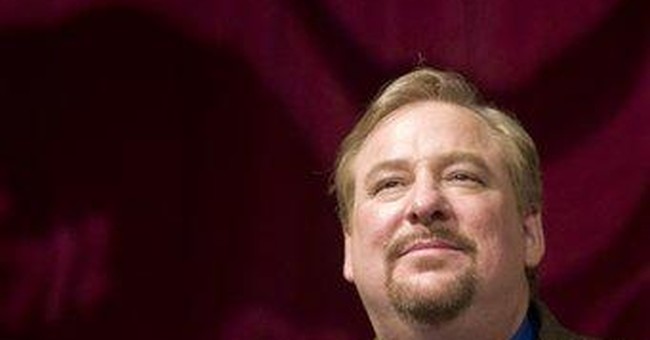 Monday night on Larry King Live, Pastor Rick Warren, author of the Purpose Driven Life, waffled on his stand to support evangelical political involvement to protect marriage. He told Larry that he had sent apologies to his gay friends for how his comments about gay marriage were misconstrued. He denied that he had ever endorsed Proposition 8 in California (which amended the constitution of the state to defend marriage as being exclusively between one man and one woman) during the two years of its duration). Finally, he claimed to be totally oblivious to what was happening in Vermont concerning gay marriage.

The day after the Larry King interview I sat in the DC City Council chambers observing an unintended consequence of Pastor Warren’s statements – emboldened gay marriage advocates. Perceiving that evangelicals are weakening and that their side is turning around, gay activists are putting forth their best efforts to attempt to win their war for marriage this year. Although Warren’s statements are only one of several factors that have moved gay activists, I maintain that they are still a factor in this battle.

Last Tuesday (April 7), a little before noon, I sat through the regularly scheduled monthly legislative meeting of the DC Council. There was only one item on the agenda that had to do with gay rights according to the printed agenda. For this reason, I was shocked at the boldness of the DC City Council as they voted to open the door for a marriage reciprocity measure that would allow anyone legally married in the nation to be legally received in the District.

It was obvious that the timing of the DC action was based on the perceived momentum that gay marriage activists have garnered during the last two weeks. Sitting in the chambers, I could see that the council had been waiting for the results from Vermont. In fact council members were quick to bring up the breaking news of that day and the previous week’s ruling by the Iowa Supreme Court. They left nothing to the imagination as they pushed for this measure to afford gay and other kinds of unions from around the world to have full rights of marriage.

One by one the council members unanimously declared their support of same-sex marriage and their desire to avoid being on the “wrong side of history.” Some even bragged about their leadership in this “civil rights” struggle.

Once again, everyone except the citizens has made their wishes known in this controversial arena. In New Hampshire, despite the fact that a majority of their citizens are not in favor of same-sex marriage; both houses of their legislature have voted to make same-sex marriage legal in their state. In DC they want to avoid going to the people directly about this issue.

How does Rick Warren figure into this process? In all the national interviews that my associates and I have given since last week, the Warren statements have been quoted as a sign of an impending massive defection of leaders from traditional marriage ranks. The lesson that all nationally influential preachers must remember is that our words have weight and that there is a responsibility that comes with our leadership. We must choose to be biblically courageous instead of taking the easy road of political correctness.

In the current media environment it is easy for evangelicals to feel as though we are being stereotyped and demonized. Church leaders want to be liked in order to win people to our faith. Unfortunately national notoriety attracts both praise and persecution. Often the best of us run from criticism at the wrong time. Remember the dynamics of the last few months? “Gay activists decried Warren’s selection despite the inclusion of openly gay bishop” – Gene Robinson. Media criticism of this cultural icon was intense, wrongly saying that he equated gay marriage to bestiality and pedophilia. Nothing could have been further from the truth. Thirty years of Warren’s faithful, compassionate work was being spoken of as though it was all done out of a narrow-minded, bigoted view of the world.

These accusations obviously got to Pastor Rick. Therefore, his appearance on Larry King was partially to assuage the ire of the gay activists. This is obvious if you go back and listen to the interview again. How bad is the damage? It’s hard to say, but let’s take a look at the DC legislation alone.

This law would essentially begin the process of opening the back door to allowing same-sex marriage in America’s first city. If the bill travels the tradition legislative process, it should receive final approval from the council next month. Next, it will be subject to a 30-day congressional review. Essentially this regulation will come before the entire nation by this summer.

It almost goes with out saying that a legal battle of epic proportions is undoubtedly going to ensue. To add insult to injury, a DC same-sex marriage bill may be brought to the City Council within weeks. Therefore, we need the nation to mobilize to protect marriage. Since a national congressional and legal showdown is inevitable, everyone can help.

As a resident of DC, I ask everyone reading this article to offer prayer for the nation and the city and to do the following three things:

1. Send this article to as many people as you can,
2. Challenge your pastors to inform their flocks,
3. E-mail your congressman that you support biblical marriage.

Let’s stand up for biblical righteousness and justice. Now is the time to create the change we really can believe in.