Veterans Day: The Bible Has Given Many of Our Veterans Faith to Persevere

Harry Hargrave
|
Posted: Nov 11, 2020 12:01 AM
Share   Tweet
The opinions expressed by columnists are their own and do not necessarily represent the views of Townhall.com. 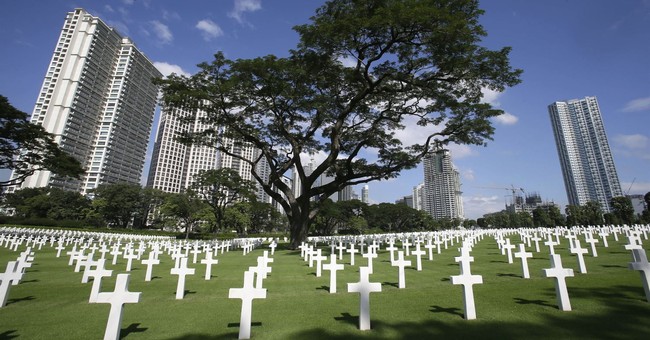 Each year since 1919, on the eleventh day of the eleventh month, Americans celebrate Veterans Day. On this day we honor and thank our veterans, active duty military personnel and their families — all selfless patriots who have dedicated their lives to defend our nation and preserve our freedoms.

This Veterans Day, I encourage Americans to also celebrate a book that has meant so much to so many American heroes over the centuries: the Bible.

Past and present, America’s soldiers, sailors, airmen and marines are known the world over as heroes — and for good reason. They defend freedom. They respond to natural disasters. They prevent the worst from happening and fight to stop the worst that is happening. These courageous people put their lives on the line for others every day and face threats and dangers unimaginable to most. No doubt many of them have found comfort in the words of Psalm 56:1-3 (ESV):  “When I am afraid, I put my trust in you. In God, whose word I praise, in God I trust; I shall not be afraid. What can flesh do to me?”

Perhaps it was just this kind of encouragement the YMCA sought to put into the hands of US soldiers during World War I by printing millions of New Testaments for the Army and Navy. These Bibles included a letter from President Woodrow Wilson. “The Bible is the word of life,” Wilson wrote. “I beg that you will read it...When you have read the Bible you will know that it is the Word of God, because you will have found it the key to your own heart, your own happiness, and your own duty.”

What a powerful exhortation from a president to the soldiers! Wilson’s message is that the Bible’s truths are just as essential to the lowliest soldier defending American freedom on distant battlefields as they are to presidents at the apex of American political power.

The Bible reminds us that we are part of something greater than ourselves. We read in Philippians 2:3-4: “Do nothing out of selfish ambition or vain conceit. Rather, in humility value others above yourselves, not looking to your own interests but each of you to the interests of the others.” Our veterans and soldiers exemplify selflessness, humility and service to others.

Consider the story of Private George R. Rome. Although his name may be unfamiliar to many, his legacy continues to this day.

Rome was born to free African American parents living in Providence, Rhode Island, in 1835. As the nation entered the Civil War in 1861, Rome and other free African Americans tried enlisting in the Union Army, but were denied because of their skin color. Yet, Rome remained undeterred.

Two years later, the United States reversed its discriminatory policy and Rome joined the 55th Massachusetts Infantry Volunteer Regiment in 1864, becoming one of nearly 200,000 African Americans who fought for the Union.

In his time as an infantryman, Rome fought against slavery and for the preservation of the United States and saw action throughout the South. By the end of the Civil War, Rome had lost 197 of his comrades to the horrors of war and disease.

In 1864, when he joined the service, Rome was given a New Testament by the New York Bible Society. The Presentation page bears the words of Psalm 91:1-2: “He that dwelleth in the secret place of the Most High shall abide under the shadow of the Almighty. I will say of the Lord, He is my refuge and my fortress: My God; in Him will I trust.”

Although we may never know exactly how Scripture influenced Rome’s life, we do know from his writings in his Bible that he read it often, as he recorded some details of his war experiences within its pages.

We are honored to have Rome’s New Testament and his portrait on display at Museum of the Bible. We also have several other Bibles that belonged to our American heroes, from the days of the Revolutionary War onward, that can be viewed either in person or on our website.

In the darkest and most dangerous moments, the Bible tells us we are not alone. God is always close to his people — even when they don’t feel his presence — and he uses his people to strengthen and uplift each other.

For example, imagine the morale boost for a soldier hunkered down in a trench in World War I Europe to receive a handwritten note from someone back home. Indeed, some soldiers who opened their copies of “The Soldier's Pocket Bible” — a facsimile of a tract issued during the English Civil War for use by the army of Oliver Cromwell — found a personal inscription from former president Theodore Roosevelt.

Roosevelt’s message validated the soldier’s impulse to turn to Scripture: “This is worth reading, comrade and friend.”

On Veterans Day, as we thank and celebrate our heroes and the Bible’s influence on their lives it is striking to note that, perhaps, no one has learned better than the American military veteran what it means to cling to the Bible itself as part of God’s comforting, guiding and strengthening presence.

Harry Hargrave is CEO of Museum of the Bible.