Short-Selling the Punch Bowl of Death

The Punchbowl of Death (POD) is an interesting short-sale set-up or formation that I first observed in the 1990's when I was first able to study the charts of big, winning stocks from earlier, historical market periods.

This is certainly one punchbowl you don't want to be drinking from! Obviously, the terminology I chose here is derived from the fact that these big, double-top type set-ups that are regularly seen as weekly chart topping formations in big, former market leaders resemble massive, over-sized "cup" formations.

But nobody drinks from cups that big, hence the term "punchbowl." Punchbowls are big bowl-like things, and can often be "spiked" with certain dangerous "ingredients," so I felt this term was quite appropriate for this type of formation.

I don't have historical charts of these stocks available to publish here in this article, but two historical examples that first caught my eye early on with respect to this Punchbowl of Death short-sale set-up idea were Syntex from 1962-1966 and Simmonds Precision Products from 1964 to 1966.

From there the stock began another upside move that terminated in early 1966 at just over $120 a share before the stock finally topped for good. Simmonds Precision came public in mid-1964, ran up from around $2.50 to around $7.50 a share before forming a cup-with-handle base from which it broke out of in early October 1965 and ran up to about $60 a share in April of 1966. The stock then formed a nearly 50% deep "cup" and made another run at its highs to complete a "punchbowl" type of set-up before topping for good.

What I found interesting was this idea that these huge, winning stocks that no doubt investors start salivating over once their moves become obvious are often able to rally back up to their prior highs one more time before topping for good. Usually these rallies back up to the highs occur in a second or later leg in an overall bull market, or during a bear market rally.

If you want to learn how to short sell stocks based on a POD formation, it is helpful to understand the basic psychological and technical concepts that provide the context within which a POD is able to form.

The essence of a POD can be seen in the weekly chart of Ariba, Inc. (ARBA) in 2000, shown below. ARBA was a hot stock as a Business-to-Business e-commerce play, affectionately known as "B2B" during the internet bubble of the late 1990's, and it went into a parabolic move into early March 2000, initially topping at the same time, more or less, as the general market at the time.

The decline in the general market took ARBA down with it as the stock corrected over 70% from its March 2000 peak. This is the initial characteristic of POD formation: a sharp decline off the peak after a leading stock has had an accelerated upside move. This is then followed by a short bottoming process and then another sharp move to the upside that approaches or exceeds the prior high on the left side of the giant "bowl" or POD formation. 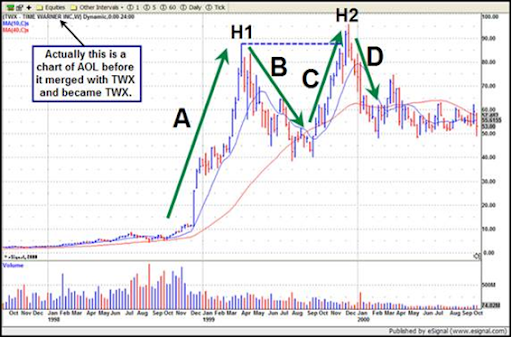 Let's break this down a bit further. In 1999-2000, two stocks I was intimately familiar with because I was long them at some point during their big prices moves, America Online (AOL then, but TWX now) and Schwab Co. (SCH then, but SCHW now) formed punchbowl of death topping formations. It was at this point that I began to catalog these formations and their basic features.

As the weekly chart of TWX (AOL from that period) shows below, the "POD" is formed in four major "movements," labeled A through D on the chart. Movement A is the initial "hot stock" price run that usually creates a great deal of excitement and which gets ever more obvious as the stock continues to run ever higher. AOL/TWX finally topped out in the first quarter of 1999 at H1 and then broke down hard on the price decline labeled "B," eventually bottoming in the summer of 1999. From here the stock began rally "C" to complete the right side of the "punchbowl" formation before topping out at H2, which just exceeded the prior high at H1.

This is a typical feature of POD formations, although the H2 high does not always have to be higher than H1 – sometimes they can be roughly the same or H2 can be lower than H1, as we will see in some of the forthcoming examples, below. This secondary rally "C" took place once another major bull leg began in the market in October 1999. Once AOL/TWX topped out at H2 it was all over.

While there are always exceptions, I believe that most PODs work as topping formations because the rally on the "C" leg of the formation simply cannot be sustained after such a severe break down. The initial break off the peak on the "B" decline is a sign that the stock is enduring a wave of institutional distribution which likely later resumes at H2 when the stock gets back up to its old H1 high. This is the "psychological context" of a POD.

Charles Schwab Corp. (SCHW) was another short sale set-up POD stock that topped in early 1999 but again revisited its highs in early 2000 after a new bull leg had started in October 1998. SCHW is interesting because it actually formed a "double POD" type of formation, making one more attempt at is highs on H3, as the weekly chart below shows.

Of course, you could have shorted the stock off the H2 high and done quite well, and it is not often that you get a second chance at shorting a POD. But SCHW did form a second POD which has the look of a big, ugly cup-with-handle formation before failing off the handle and topping for good. While the AOL/TWX and SCHW examples are longer-term PODs that take about a year or more to form, shorter-term PODs can also be found from time to time, usually in a very, very hot IPO that has some very hot theme driving it, such as Taser International (TASR) shown on a weekly chart below.

TASR started trading in mid-2001 and eventually tripled following the boost it got right after 9/11, but the stock rolled over and broke down before getting hot again in 2003 and setting off on a seven-fold price move. TASR topped out in April of 2004 at H1 before forming a bottom and then a re-test of that bottom in July/August of 2004.

From there the stock formed a little cup-with-handle which looked constructive as the stock broke out and pushed towards the old H1 highs at H2 and then continued to a marginal all-time high at H3 before busting wide open in rapid fashion. One thing to note on the TASR chart below is that the rally up into the H2 and H3 highs occurred in the latter half of 2004 when the market began another leg up in the overall 2003-2007 bull market phase. 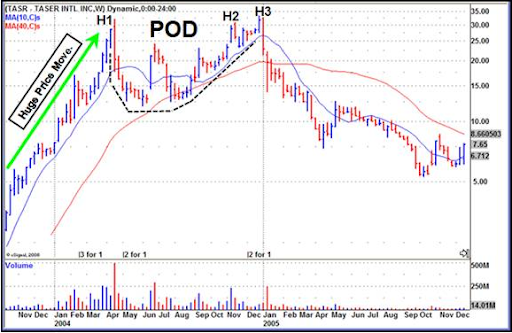 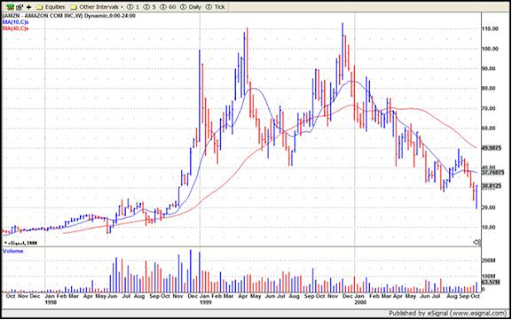 If played correctly, short sale set-up POD formations can offer some of the most rewarding downside short-sale plays, but timing is critical.

In all of the examples shown above in this article, note that once the stocks break down below the 10-week, or its daily equivalent in the 50-day, moving average on the right side of the formation that is the general point at which the stocks should be shorted.

Using the 10-week or 50-day moving average at that point also serves as a ready guide for your upside stop, and would-be POD short-sellers should also keep in mind that this can require some persistence. Note how in the AAPL example, above, the stock starts to break down below the blue 10-week line a few times, even finding resistance at the line in the May-June 2008 time period, and then rallying above it one more time in July 2008 before it finally rolls over.

Finally, as the general market began to break in late August/early September 2008 AAPL also split wide open, which illustrates how the breakdown off the right peak of any POD will almost always coincide with a market down leg.

This is an important short-selling tip, which is that short-sale target stocks must always be handled and shorted in conjunction with a downside market break where the odds of success are much higher.

As with most short-sale set-up situation, swimming with the tide of the market increases your odds of success.

;More stories recommended for you:
Click the Townhall Finance blog The Ticker for daily commentary on money and markets.