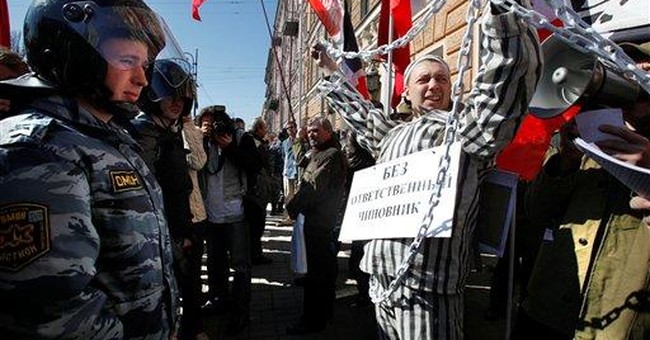 WASHINGTON -- From Oct. 18 to Dec. 3, 1961, 116,000 people visited New York's Museum of Modern Art before anyone noticed that Henri Matisse's painting "Le Bateau" had been hung upside down. Modernity is supposed to "transgress" standards of the traditional, which is why Paul Hindemith, while rehearsing one of his dissonant orchestral compositions, said to the musicians, "No, no gentlemen -- even though it sounds wrong, it's still not right."

Proponents of today's world-turned-upside-down economic policies say the policies might seem wrong but really are boldly modern in their rejection of markets in favor of pervasive government intervention in economic life. Hence New York, which until eight months ago was the financial capital of the world, is no longer even the financial capital of the United States. Washington is.

So says Ian Bremmer in "State Capitalism Comes of Age: The End of the Free Market?" in the current issue of Foreign Affairs. It should be read by Americans who are dismayed by the blurring of the line between public and private sectors.

Most Americans assume -- and are encouraged to do so by those doing the blurring -- that the government is doing this reluctantly and is eager to find an "exit strategy" to "unwind" its interventions. Bremmer, president of the consulting firm Eurasia Group, believes that although the governments of many developing nations have made "a strategic rejection of free-market doctrine," governments of developed countries do not intend to "manage" their economies "indefinitely." About the former, he is correct. About the latter, his wish may be the father of his thought.

Among the myriad signs that many nations are developing systems "in which the state functions as the leading economic actor," Bremmer notes that the 13 largest oil companies are owned and operated by governments and that governments in the developing world control three-quarters of the world's energy reserves. Privately owned multinational companies produce just 10 percent of the world's oil and own just 3 percent of its proven reserves. In many developing nations, large companies that remain in private hands are only nominally private: They are government appendages in that they are dependent on government patronage for credit, contracts and subsidies. "Sovereign wealth funds" -- state-owned investment portfolios -- already account for one-eighth of global investment, double the figure just five years ago. The largest such funds are those of Abu Dhabi, Saudi Arabia and China, with Russia's rising. The only democracy operating one of the 10 largest funds is Norway. The combined assets of all such funds exceed the assets of all the world's hedge funds.

Bremmer says, correctly, that state capitalism "has introduced massive inefficiencies into global markets and injected populist politics into economic decision-making," that "deeper state intervention in an economy means that bureaucratic waste, inefficiency and corruption are more likely to hold back growth," and that politicians tend to develop stimulus packages with their constituencies, not economic efficiencies, in mind. Therefore, he says, the state must eventually retreat. He probably is wrong because he underestimates the pleasure politicians derive from using their nation's wealth as a slush fund for purchasing political advantage.

In 1937, columnist Walter Lippmann, deploring the rise of "authoritarian collectivism," lamented that in order to be taken seriously a politician or theorist had to have "proposals to magnify the power of public officials and to extend and multiply their intervention in human affairs." Paul A. Rahe, a historian and political philosopher at Hillsdale College, in his new book "Soft Despotism, Democracy's Drift," notes that, long before 1937, we were warned.

In "Democracy in America," Alexis de Tocqueville anticipated people being governed by "an immense, tutelary power" determined to take "sole charge of assuring their enjoyment and of watching over their fate." It would be a power "absolute, attentive to detail, regular, provident and gentle," aiming for our happiness but wanting "to be the only agent and the sole arbiter of that happiness." It would, Tocqueville said, provide people security, anticipate their needs, direct their industries and divide their inheritances. It would envelop society in "a network of petty regulations -- complicated, minute and uniform." But softly: "It does not break wills; it softens them, bends them, and directs them" until people resemble "a herd of timid and industrious animals, of which the government is the shepherd."

So what today seems as modern as Matisse once seemed was actually foreseen 17 decades ago. Like Hindemith's music, what is happening seems wrong. And it is.