A "Car Czar" - Silliness on Stilts 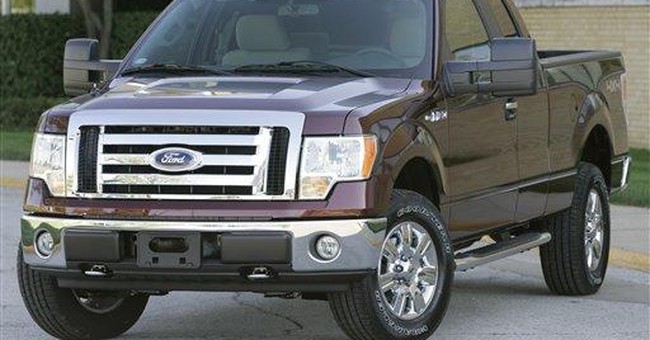 DEARBORN, Mich. -- Designed by architects from Skidmore, Owings and Merrill, the Chicago firm that created many icons of postwar modernism, Ford's headquarters building has the sleek glass-and-steel minimalism that characterized up-to-date architecture in the 1950s, when America was at the wheel of the world and even buildings seemed streamlined for speed. Ford's building opened in 1956, a peak of American confidence -- one year before Sputnik shook Americans' faith in their technological supremacy and the Edsel shook their faith in the acumen of corporate America grown slothful from complacency.

Today the building is home to high anxiety. Yet CEO Alan Mulally, a boyish 63, seems preternaturally pleased, in spite of his recent participation in Congress' ritual pillorying of the leaders of the so-called Big Three auto companies. Ford took a full measure of the abuse for the failures of "Detroit," while asking for none of the money urgently sought by General Motors and Chrysler, aka the "Too Big One, and a Fraction."

Twenty-seven months ago, Mulally, who probably thought he had seen the worst that events could throw at his business career, came to Ford from Boeing. There, when civilian aviation became collateral damage of 9/11, he presided over downsizing the work force from 127,000 to 52,000. One of his first moves at Ford was one of the great gambles in U.S. business history: He borrowed $23.5 billion, most of it secured by almost all of Ford's assets, even including the intellectual property in the company's blue oval logo. Today, Mulally says "Ford would have adequate short-term liquidity" even if throughout 2009, industry sales levels were worse than in October 2008. That is why Ford is not asking Congress for money. It is asking only for access to money if there should be what Mulally delicately calls "a significant industry event."

By that he means GM filing for bankruptcy, which would, he believes, threaten many of the nation's 3,000 parts manufacturers, which already are owed $13 billion from the three domestic companies. Ford uses 80 percent of the suppliers GM and Chrysler use, and 25 percent of Ford's highest-volume dealers also own GM and/or Chrysler dealerships. That is why Mulally appeared like a good soldier before Congress with his GM and Chrysler counterparts as those two pleaded for cash to avoid bankruptcy.

Mulally says bankruptcy, which has become almost routine for airlines, would be fatal for a car company: Passengers will fly on an airline undergoing reorganization in bankruptcy because their tickets are short-term transactions, whereas customers cannot be confident that a car company in bankruptcy will be around to honor its warranties years hence.

While Mulally was at Boeing, where he was responsible for developing what became the very successful 777 aircraft, he brought to Seattle for consultation the Ford team that had made the Taurus the best-selling car in America for five years. It, however, became stale, was supplanted by Toyota's Camry, and was discontinued in October 2006.

It has, however, come back and is being revamped as part of plans to build all the company's products on a few "platforms" -- powertrains, underpinnings, suspension systems. Many of these platforms are currently used in cars that are consistently profitable in the European, Asian and Latin American markets.

Having reduced its work force 50 percent in three years, by February Ford will have cut salaried personnel costs 40 percent. Most important, it is now on a path to prune, soon, almost half of what have been 76 nameplates. Having shed Aston Martin, Jaguar and Land Rover, it seems to be moving toward the sale of Volvo and of what remains of its reduced investment in Mazda. Soon the company will consist of Ford, Lincoln and -- perhaps -- Mercury, with consolidated dealerships (currently 3,790, down from 4,396 three years ago).

Total industry sales in America this year -- about 10.5 million, down from 17 million in 2005 -- are, on a per capita basis, the lowest since World War II. There is zero likelihood of industry sales sufficient for three U.S. companies to share them profitably with "transplants" -- factories producing cars with foreign nameplates. A 1979 bailout enabled Chrysler to survive to be a problem today. It almost certainly will not survive.

So the task of the proposed "car czar" -- silliness on stilts -- would be to supervise the pruning of GM's nameplates and dealerships. Anyway, the most qualified person for that ill-conceived and unenviable position already has a more promising job, as Ford's CEO.