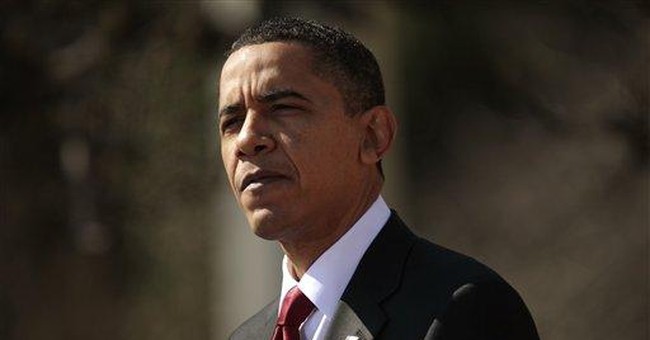 Since they lack the votes to pass their health care bill, the Democrats are thinking of “deeming” Senate bill passed in the House without a vote. When Bret Baier asked President Obama if he supported “deem and pass,” the President avoided answering directly and implied that the process isn’t nearly as important as the result.

“I don't spend a lot of time worrying about what the procedural rules are in the House or the Senate,” he said. . . . “What the American people care about is the fact that their premiums are going up 25, 40, 60 percent, and I'm going to do something about it.” So the ends justify the means?

If the President is not going to insist that the Constitution must be followed—including that pesky little clause that bills must be approved by a vote in both houses of Congress—then he is not fulfilling his oath to “support and defend the Constitution against all enemies foreign and domestic.”

Don’t tell the Founders that a ruler can breezily dismiss the law of the land. This country was birthed with blood on the principle that the law is King, not the King is law. In fact, it’s the underlying reason we declared our independence from King George and the British Crown. George was establishing an “absolute Tyranny over these States” by, in effect, acting as some Kings do—acting as if only his opinion mattered; that the will of his subjects was irrelevant and could be ignored to further his own ends.

This morning I re-read the Declaration of Independence. (If you’ve attended public school, you probably have never read it. Too much in there about the Creator and Creation to pass constitutional muster.) As I read over the birth certificate of our amazing nation, it struck me how many of the “injuries and usurpations” of King George parallel those of our current “King” who seems open to passing his unconstitutional health care bill by any unconstitutional means necessary. Here are a few excerpts from our actual founding document with parallels to today’s situation:

The history of the present King of Great Britain is a history of repeated injuries and usurpations, all having in direct object the establishment of an absolute Tyranny over these States. To prove this, let Facts be submitted to a candid world.

He has refused his Assent to Laws, the most wholesome and necessary for the public good.

The Constitution is certainly necessary for the public good, but the “deem and pass” approach violates Article 1 Section 7: “in all such Cases the Votes of both Houses shall be determined by Yeas and Nays, and the Names of the Persons voting for and against the Bill shall be entered on the Journal of each House respectively.” But Obama doesn’t worry about process—it’s the end result that counts!

He has forbidden his Governors to pass Laws of immediate and pressing importance, unless suspended in their operation till his Assent should be obtained; and when so suspended, he has utterly neglected to attend to them.

State governors are, in a sense, in the same position today. They can’t govern their own states with stifling mandates coming from the “King.” Thankfully, many governors are not taking it lying down. They are so afraid of the onerous and unconstitutional nature of the health care bill that 37 states have launched preemptive Tenth Amendment strikes against it. You don’t think President Obama will allow 37 states to opt out of his health care takeover without a fight, do you? If it’s a choice between the Constitution and his health care bill, the President’s words and deeds have already signaled that the Constitution loses. Remember, it’s not the process, but the end result that counts.

He has called together legislative bodies at places unusual, uncomfortable, and distant from the depository of their Public Records, for the sole purpose of fatiguing them into compliance with his measures.

Repeated artificial deadlines to pass this abominable health care bill—with all sorts of bribes, special deals, and backhanded parliamentary procedures—have kept Congress in session overtime, rushing to vote on Sundays and holidays, and all without ever reading the bill. According to Nancy Pelosi, that’s perfectly understandable because we have to pass the bill first in order to find out what’s in it! (Would the media allow a Republican speaker to get away with such idiocy?)

He has obstructed the Administration of Justice by refusing his Assent to Laws for establishing Judiciary Powers.

While the judiciary powers have long been established, President Obama questioned their legitimacy by rebuking the Supreme Court publically at the State of the Union address. That might be appropriate if the Supreme Court was ignoring the Constitution (like he is), but it wasn’t. The President just didn’t like the political implications of the decision, so he rebuked the Court. And he didn’t even have his facts straight doing so!

He has erected a multitude of New Offices, and sent hither swarms of Officers to harass our people and eat out their substance.

While other presidents have foolishly appointed czars here and there, President Obama has created virtually an entire government of them—32 “Officers” not accountable to the people but paid with the people’s money. His supporters claim President Obama is not a socialist or a communist. I guess it’s just his policies that are confusing me.

[He has imposed] Taxes on us without our Consent

“Deem” the health care bill “passed” without a vote and you have massive tax increases without our consent. Don’t like the fact that “cap and trade” is going nowhere in the Senate? No problem for the President: just tell the EPA to enact the regulations anyway. Never mind that this is unconstitutional, or that it constitutes another massive tax increase without our consent.

Again, to President Obama, the process is not important, only the end result.

I have to ask, would the President feel the same way about impeachment?