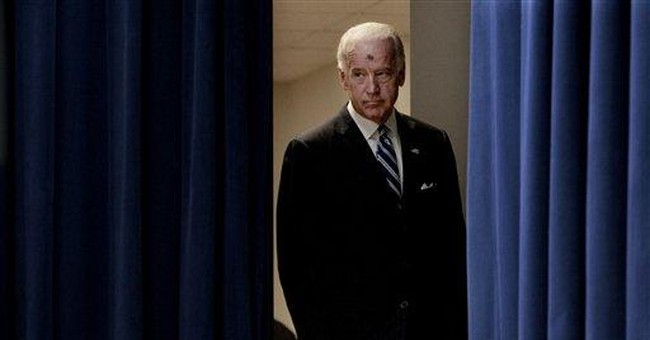 WASHINGTON -- This week, the Drudge Report gave emphasis to its lead headline that a CNN poll found 52 percent of its respondents to be opposed to the re-election of President Barack Obama with this boldface screamer: "Shock." Who is shocked? The American people are a sensible lot. Frankly, I am not shocked.

This administration is as inept as you would expect an administration to be when presided over by the most inexperienced and most far-left president in modern American history. Mr. Obama is out of his depth. Moreover, he and his aides are oblivious to political realities. A perfect example of this is their deployment this week of Vice President Joe Biden to rebut former Vice President Richard Cheney's criticism of the Obama administration's approach to the war on terror. Pithily put, Cheney accuses the administration of treating the war on terror as a legal matter rather than a war. He is worried about our national security, and quite properly he fears more attacks within the United States unless we are on the offensive.

So whom does the White House send out against this formidable foreign policy advocate? The administration sends the gaffable Joe Biden, the most gaffe-prone figure in public life. If you are like me, you tune him in simply for a hearty laugh. Moreover, the White House puts Biden in an absurd position. He is scheduled for two Sunday morning rebuttals of Cheney's Sunday morning appearance on ABC's "This Week," one on CBS' "Face the Nation" and the other on NBC's "Meet the Press." But his NBC rebuttal was taped Saturday night from the Winter Olympics, before Biden had anything to rebut. It would be perhaps 12 hours before Biden even heard Cheney's criticism. Amusingly, "a senior White House official" told The Washington Post that the administration had chosen Biden for his ability to "hold the former vice president accountable to the facts in real time." Yes, this fantasist said the "facts."

Biden's unhappy experiences with the facts are legendary. I cherish his early autumn string of blunders committed during the 2008 campaign. Do you recall? During an interview with CBS' Katie Couric, Biden claimed that Franklin Roosevelt was president during the 1929 crash of the stock market and that Roosevelt immediately "got on television" to reassure the American people. Incidentally, when Biden uttered this preposterosity, Couric's face betrayed no hint she recognized that Herbert Hoover was president in 1929 or that there was no national television audience in existence; journalistic mediocrity meets political mediocrity.

Biden's gaffes continued. Despite having been ignominiously forced from the 1988 Democratic presidential primaries for plagiarizing British Labour Party leader Neil Kinnock's recollections of life in Welsh coal mines, Biden BS'd to an audience of Virginia coal miners that when he was young, he had been "a hard coal miner" -- which was revealed to be a total fabrication. It was at about this time that Biden was caught lying (repeatedly!) that along the Afghanistan-Pakistan border, his helicopter had recently been forced down by enemy fire. Ultimately, the press reported that inclement weather was the cause.

More seriously, during a debate with then-Gov. Sarah Palin, Biden erroneously claimed that the United States "drove Hezbollah out of Lebanon." Alas, nothing of the kind had happened. More amusingly, he declared, "The No. 1 job facing the middle class, and it happens to be, as Barack says, a three-letter word: jobs, J-O-B-S, jobs." The gaffable candidate made all these misstatements within a four-week period in early autumn, beginning with some memorable advice to a journalist covering him. Tapping the reporter on the chest (presumably a male reporter), Biden advised, "You need to work on your pecs."

White House officials have been telling reporters that they relish the run-ins with Cheney because he is, to quote The Washington Post, one of the "least popular political figures in America." That would put him in the category of House Speaker Nancy Pelosi and Senate Majority Leader Harry Reid. Yet other historical figures have borne Cheney's message of national peril and endured public scorn, for instance, Winston Churchill. When Churchill was summoning his countrymen to vigilance, he was so alone that historians have called the period his "Wilderness Years." It was a tough time, and Churchill did not even have the delightful Vice President Biden to pin the donkey's tail on.