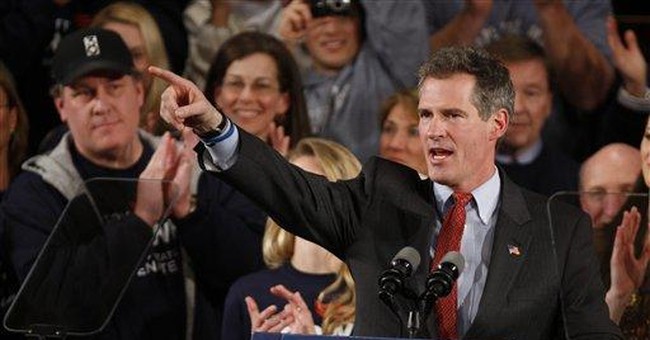 As the now national Senate race between Republican Scott Brown and Democrat Martha Coakley speeds toward a controversial conclusion, D.C.-based reporters and political friends of mine, knowing I hail from the Dorchester section of Boston, have been asking me a telling question: "Politically, which is more corrupt? Chicago or Massachusetts?"

Sadly for the good people of the Bay State and for all those who care about transparency in the election process, Massachusetts -- through the office of Secretary of State William F. Galvin and the entrenched Democratic machine -- could easily wrest the crown of corruption off the head of the Chicago Democratic machine.

Let's not forget, not only do the Democrats have their hand deep inside the Massachusetts cookie jar, they control it outright. So much so that just last fall, the Massachusetts Democrats changed state law to ensure that Gov. Deval Patrick could appoint a machine approved Democrat (Kirk) to fill the seat after Sen. Edward Kennedy's passing.

How best to steal the election from Brown and the people of Massachusetts? Absentee ballots.

As has been shown time and again across the nation, Democrats like to lose, misplace, or never count absentee ballots. Traditionally, they tend to favor the Republican candidate. Especially those from overseas military personnel.

And the Justice Department had to reach a settlement with Galvin in the past for prior problems with the Uniformed Overseas Citizen Absentee Voting Act. So, if the election is close, the absentee ballots will be the final battleground.

If Brown somehow wins by too large a margin to mess with the absentee ballots, then the Democratic machine in Massachusetts can delay the certification of the results -- for weeks if necessary.

A delay again would ensure Kirk stays in office long enough to cast the deciding vote for Obamacare. As Democratic candidate -- and protector of reporter-assaulting staff -- Coakley said, "Until a new senator is sworn in, Senator Kirk is the senator."

Galvin has already telegraphed this move by citing state law which allows city and town clerks to wait 10 days for those absentee ballots to arrive. Assuming he does not "lose" them in the process. Then, once tabulated, the city and town clerks have 5 days more before they have to file the returns with Galvin's office.

Gee, if memory serves, Galvin bypassed this time-consuming waiting process so Democrat Niki Tsongas could occupy a U.S. House of Representatives seat after a special election. See how neat all of this is?

How nice to have one-party rule, the Boston Globe in your back pocket, and no accountability. The Chicago-Obama Democratic machine must be bursting with pride at a Massachusetts Democratic operation that clearly has the skill sets necessary to deprive the voters of an honest and unpoliticized outcome.

The people of Massachusetts deserve much better. If they don't want their state to be compared negatively with the famously corrupt Chicago machine, they have to speak up. It's all on them at the moment.

We will see who really cares on January 19.