Obama Administation is a Swamp of Ineptitude, Mismanagement and Sordid Scandals 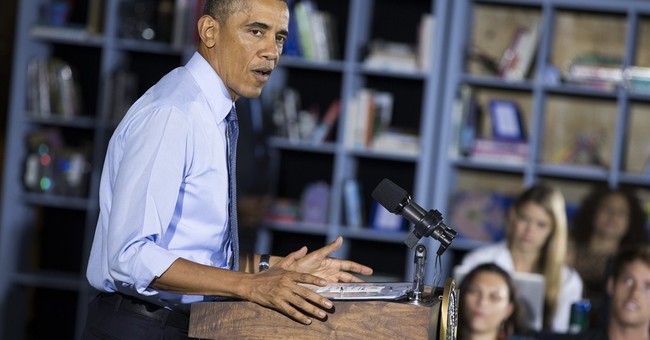 It is becoming increasingly clear that President Obama's trouble-plagued administration is in the midst of a political meltdown.

His administration has been hit by multiple political and bureaucratic scandals that have exposed a government badly in need of experienced, executive leadership.

His two previous secretaries of Defense have raked him over the coals for his indecisiveness in dealing with critical foreign policies and prosecuting the war against terrorism.

Former secretary Robert Gates, in his stinging memoir, "Duty", confessed he had deep misgivings about Obama's failed leadership in the war in Afghanistan. Obama, Gates wrote, "doesn't believe his own strategy, and doesn't consider the war to be his. For him it's all about getting out."

Even as Obama was sending in additional forces in 2010, Gates said the president made it clear that he was "skeptical if not outright convinced it would fail."

Former Defense secretary Leon Panetta delivers an even more devastating critique of the president in his new book, "Worthy Fights: A Memoir of Leadership in War and Peace. Obama's decisions, he writes, have spawned an even more virulent and more dangerous terrorist threat.

In an interview with Susan Page of USA Today, Panetta said Obama's failure to retain a military presence in Iraq "created a vacuum in terms of the ability of that country to better protect itself, and it's out of that vacuum that ISIS [terrorists] began to breed."

Even his former secretary of State, Hillary Clinton, has made it clear that she and Panetta strongly disagreed with Obama's stubborn opposition to arming the Syrian rebels in their fight to topple a brutal dictator.

Gates and Panetta, revealing many of the war policy battles that were fought inside the administration, paint an unflattering portrait of a president who is disengaged and has trouble reaching decisions.

Panetta had criticized Obama weaknesses before: His all too often tendency to remain aloof, above the fray, and reluctant to get his hands dirty in the rough and tumble of governing.

"You have to engage in the process. This is a town where it's not enough to feel you have the right answers. You've got to roll up your sleeves, and you've got to really engage," he told a group of reporters last year at a briefing sponsored by the Wall Street Journal.

But that's not the end of Obama's political troubles as he heads toward what is shaping up to be another major political defeat for his party and his presidency in the Nov. 4 midterm congressional elections.

With his job approval polls buried in the low 40s -- and lower on his handling of a still-sluggish, uneven economic recovery -- it is clear that the mounting criticism from high level former officials in his administration has irreparably tarnished what remains of his presidency.

He's become so unpopular at this point that he has not been campaigning for many his party's most vulnerable candidates. Instead, he is restricting his political activities to Democratic fund-raisers -- a situation almost unheard of in modern American politics.

If all this were not enough, Obama received more bad news this week about his signature achievement, the so-called Affordable Care Act, or Obamacare. It's even more unpopular than ever, according to the Gallup Poll.

"Although more provisions" of the health care program "have taken effect over the past year, more Americans still say the law has hurt rather than helped them," Gallup reported Wednesday.
Notably 15 percent of Democrats now say the law has hurt them. That's up from 6 percent who said that in May.

It's going to hurt a lot more of us. New reports say that more health care notices are being sent to individuals and families whose policies are no longer in compliance with Obamacare.

"It looks like several hundred thousand people across the country will receive notices in the coming days and weeks," Jim Capretta of the Ethics and Public Policy Center told Fox News Thursday.

The liberal news media has tried to convince us that Obamacare has retreated as a major election year issue. Don't believe it. Most GOP campaigns are still hitting this issue hard, and a number of Democratic candidates are trying to avoid the issue altogether, though it continues to resonate at the grassroots, especially among independent, middle class voters.

With so many Americans having a hard time finding good paying, full time jobs, or being force to accept part-time work, or seeing their payroll hours cut, higher medical insurance costs is the last straw. And that will likely boost anti-Obama voter turnout next month.

Meantime, the Obama administration has been hit by a string of scandals over the past half dozen years that are the result lax oversight, incompetent management, and an inexperienced president who has made poor choices in his top appointments.

The long-known scandal at the Veterans Administration, where untold numbers of former servicemen were put on lengthy waiting lists to obtain needed treatment and care, should never have happened.

The Government Accountability Office, the investigative arm of Congress, has produced a mountain of audits over the years detailing the VA's inexcusable mismanagement. If Obama's administration had been doing its job, instead of looking the other way, that would have been one of its highest priorities.

Throw in the scandals at the IRS, the wild, costly parties at the General Services Administration, the ineptitude in the Secret Service, the cost overruns at the Department of Homeland Security, to name only a few, and you have a government that is out of control.

Think about that when you vote 26 days from now.