Will the GOP Hold the Debt Limit Hostage to Spending Cuts? 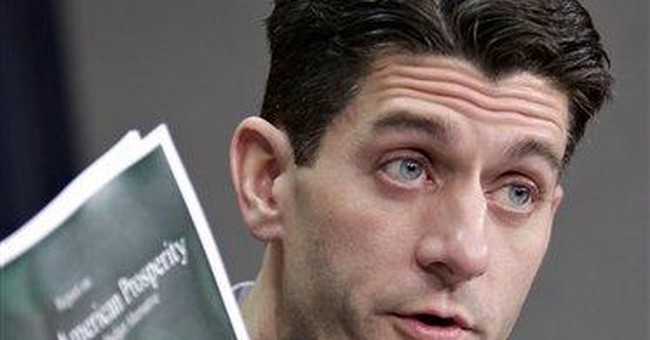 A risky fiscal strategy is gathering strength in Congress: reduce federal spending and the deficit by freezing the national-debt limit.

Republican budget hawks are pushing that course of action, absent a compromise budget-cutting deal. But the idea we can stop profligate spending by clamping down on further borrowing by voting against raising the debt ceiling will not necessarily, by itself, reduce spending or even further debt.

In fact, spending and the gross national debt could continue to rise at an irresponsible rate. Take, for example, Social Security payroll taxes that the government uses to pay its bills, leaving an IOU slip in the cash drawer that adds to the national debt.

Even in the real world, when business saw their profits disappear and their debts mount in the Great Recession, they didn't respond to their looming insolvency by refusing to pay all their debts. They cut spending, laid off workers, reduced salaries, or sold off assets, and in many cases raised funds through bank loans or bond sales to tide them over until the economy and their own finances improved.

The federal government, whose national debt spilled over the $14 trillion mark last week -- or $45,300 for every man, woman or child in the country -- must do the same: Slash spending and raise the debt limit in the short term until we can climb out of the bipartisan financial hole we've dug over many years.

The fight is between two forces: Republicans who want to whack the budget with deep spending cuts and the Obama administration, which wants modestly slower spending and an increased debt limit to boot.

The best strategy in this situation is to leverage the need to raise the debt limit by demanding deeper spending cuts, stricter budget rules and caps to curb future spending.

Instead of "fighting against a debt-ceiling increase that absolutely must take place because of the odd way it is defined in law or adding killer provisions, Republicans should unite to attach effective new rules that restrain spending and the size of the government," wrote free-market economist David Malpass in the Washington Times this week.

A blizzard of recent memos and blogs among conservative think tanks agree that we have to do both, making it crystal clear to the president that he must accept deeper spending cuts in this first round if he wants a debt-limit increase. If he wants to call it hostage taking, so be it.

"Any increase in the debt ceiling should be accompanied by immediate, substantial spending reductions," Heritage Foundation assistant director of strategic operations Conn Carroll wrote in a blog last week.

Holding the debt limit hostage to much bigger spending cuts that Obama might be unwilling to accept is part and parcel of the kind of strategic maneuvering that leads to legislative compromise. And the only strategy this White House understands.

Republican leaders threatened to let all of the 2001 to 2003 Bush tax cuts expire rather than see them raised on higher-income brackets, investors and other growth sectors of the economy. Obama, whose 2012 prospects are threatened by an anemic economy, caved and the GOP got what it wanted.

In the same way, conservative firebrands are threatening to vote against raising the debt limit if muscular spending cuts are not a part of the package.

And Republicans certainly have the votes to do so in the House, and the roll call could be close the Senate. In a showdown vote in 2006, not a single Democrat voted to raise the debt limit, with Bush winning on a party-line vote of 52 to 48.

One of the Democrats voting no was a young freshman senator by the name of Barack Obama, who said at the time that "raising the debt limit is a sign of leadership failure. Leadership means that 'the buck stops here.' Instead, Washington is shifting the burden of bad choices today onto the backs of our children and grandchildren."

The United States, whose bonds and Treasury bills are the safest investments in the world, has never defaulted on its debts and it is not going to do so this time -- not in a $15 trillion economy with nearly $3 trillion poring into the government's tax coffers each year.

But Republicans were sent here to cut spending and begin putting Obama's $1.3 trillion budget deficit and the national debt on a steep downward trajectory.

They are planning to do just that in several ways, beginning with budget cuts in the remaining eight months of this fiscal year, and in their appropriations bills for fiscal 2012. With Democrats in control of the Senate and Obama's veto pen, it's not going to be quick, it is not going to be easy, and it won't be pretty.

But the long-delayed battle to control the growth of government has begun, along with the possibly game-changing 2012 presidential and congressional election cycle. The nation's beleaguered voters are waiting and watching to see if Washington carries out their demands.