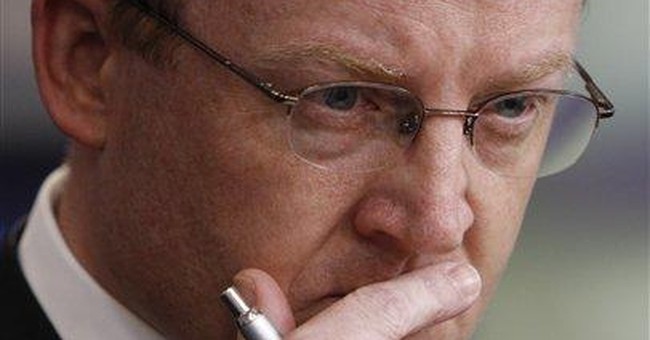 WASHINGTON -- A new Democratic survey shows a significant erosion in public support for Barack Obama's handling of the terrorist threat and other national security issues that pollsters say should be a "wake-up call" for the president and his party.

The poll numbers have shaken White House advisers who are said to be nearing a recommendation that Obama reverse his unpopular plan to try Sept. 11, 2001, terrorist mastermind Khalid Sheikh Mohammed in a U.S. civilian court, and prosecute him instead in a military tribunal.

The polling report from Democracy Corps, run by pollster Stanley Greenberg and former Clinton strategist James Carville, and co-sponsored by the Third Way, a Democratic advocacy group, is the latest bad news facing Obama and his party just eight months before voters go to the polls in November.

Obama and the Democrats are getting blamed not only for their failed economic policies that have put the economy on a jobless trajectory, and their attempts to ramrod an unpopular health care plan through Congress; now Americans are voicing their deep disapproval of the most important job the president has: protecting our country from all enemies, foreign and domestic.

Greenberg and company said its poll showed Obama and his party have a lot of repair work ahead of them to regain the shattered confidence of the voters on this score. Among their complaints:

-- "The administration's response to the Christmas Day terrorist attempt has contributed to the erosion," the polling report said. Obama's response to the attempted airline attack barely won 50 percent approval. But "now, a narrow 46 to 42 percent plurality of likely voters say they feel less confident about the administration's handling of national security because of how it responded to the incident, with views splitting largely along partisan lines."

-- The administration's decision to give foreign terrorists the same legal and civilian jury trial rights accorded to all U.S. citizens is perhaps the most politically virulent issue of all, the survey found. The voters' angry responses came when Greenberg read this Republican message to those he polled:

"Democrats are insisting that terrorists be treated like American citizens, with full legal protections, like Miranda rights. But we should put the safety of Americans before the rights of terrorists, and we should be using all our toughest interrogation techniques to fight back against these terrorists who are trying to kill us."

The voters' response: "...a 60 percent majority of likely voters feels more confident about the Republicans on national security in response to this message."

As for Obama's kinder and gentler arguments for closing Guantanamo Bay and reading their Miranda rights, "a 51 percent to 44 percent majority of likely voters disapproves of his efforts on the 'prosecution and interrogation of terrorism suspects.'"

-- Then there's Iran's growing threat to Israel and the Middle East. The president's "can't we get along by just talking to one another" approach isn't playing well with Americans, either:

"In the wake of continued intransigence by Tehran about its nuclear program, as well as protests by the Iranian opposition, a 49 percent to 42 percent plurality of America's likely voters express disapproval of the way the president is handling security issues related to Iran."

There were issues where Obama seemed to be holding his own, but when Greenberg added the pluses and minuses on this political front, he saw that the president was not only losing the confidence of the voters, but also that "the public once again has real and rising doubts about the Democrats' handling of national security issues, as compared to their faith in Republicans."

This "troubling trend," Greenberg's numbers show, "is especially strong among women, and among independents, who now favor Republicans on this question by a 56 to 20 percent margin."

The White House has seen these and similar numbers in other polls and has already begun to signal it is taking steps to change course on some of the key issues.

Last week, The Washington Post ran a front page story -- under the headline "Obama aides near reversal on 9/11 trial" -- about changing its plan to try five of the most bloodthirsty terrorists at Guantanamo in civilian courts. The harebrained scheme of a New York City venue is no more. A return to the swift justice of a military court is on the front burner.

But it's going to take a lot more than this to earn back the confidence of the electorate that the people now running the government and Congress can keep America safe from the terrorists who are plotting their next attack even now.

Greenberg's poll is more than "a wake-up call" for Obama and his party. It is a renewed reminder of the common sense of the American people that the ruling party doesn't have what it takes to protect us.