Obama' Flip-Flops Anger the Liberal Base 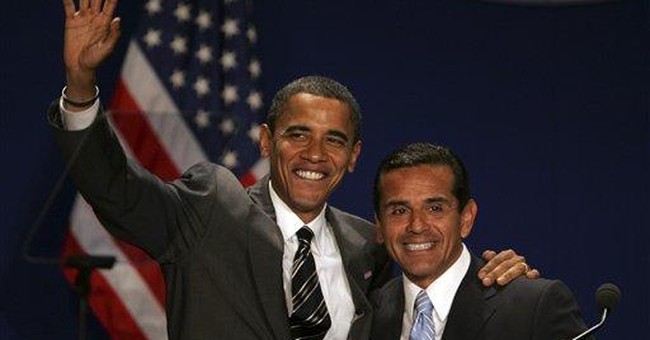 WASHINGTON -- Barack Obama is coming under increasingly heavy fire from his left flank for abandoning long-held liberal positions in an abrupt swing toward the center that threatens his candidacy.

After racing away from hardcore positions on trade protectionism, gun control, government wiretapping, the death penalty and even his vaunted troop-pullout plans for Iraq, his once-diehard supporters on the left are attacking his character and honesty and threatening to withhold campaign contributions or, worse, shift their allegiance to Ralph Nader.

"We've been hearing more from voters who are disconcerted about Obama's move to the right. We're hearing from antiwar folks, civil-liberties people and other activists concerned about his flip-flops and considering voting for Ralph," said Nader campaign representative Chris Driscoll.

Nader has seen a big increase in the past two weeks in his online fundraising, and a recent CNN poll shows his support rising to 6 percent, small by electoral standards, but enough to deny Obama a crucial battleground state where the vote is close.

Nowhere is the anger level toward Obama more intense than in the blogosphere, the cyberspace world that has helped to raise hundreds of millions of dollars from more than 1.7 million donors and whose activists have been his biggest fans.

"There is a line between 'moving to the center' and stabbing your allies in the back out of fear of being criticized. And, of late, he's been doing a lot of unnecessary stabbing, betraying his claims of being a new kind of politician," said Markos Moulitsas, leader of the Daily Kos Web site, the bible of the liberal netroots community.

"Not that I ever bought it, but Obama is now clearly not looking much different than every other Democratic politician who has ever turned his or her back on the base in order to prove centrist bona fides," Moulitsas told his millions of readers last week.

To demonstrate his displeasure with Obama's flip-flops on core liberal issues, Moulitsas announced he was withholding his $2,300 contribution to the campaign. "I simply have no desire to reward bad behavior," he said.

The biggest complaint from the party's grassroots activists concerned Obama's support for a Bush-backed bill to give legal immunity to telecommunication companies helping the government intercept terrorist calls and e-mails.

Complaints were coming into Obama's Web site so heavily last week that he personally went online to explain his new position. He said that telecommunications surveillance was "a vital counterterrorism tool ... to keep the American people safe."

But it did little to quell his supporters' outrage. On Democrats.com, a liberal advocacy group, Web-site president Bob Fertik said "progressives were shocked last week" over Obama's changed position. He urged supporters to temporarily hold their contributions in escrow accounts "until he demonstrates progressive leadership on issues we care about, like warrantless wiretapping."

Over at the heavily funded, ultra-left HuffingtonPost.com, blogger Joseph A. Palermo accused Obama of "blurring the line between church and state" with his faith-based program and warned the Obama camp that it was "treading on thin ice.

"If he continues to move to the right, he's going to alienate his most enthusiastic supporters ... who were responsible for catapulting him this far," Palermo wrote.

But if the Obama campaign thinks the reaction to his sudden lurch to the center on guns, trade and the Foreign Intelligence Surveillance Act is hurting him, wait until the full weight of his political shift on the Iraq war comes crashing down.

Soon after my Monday column revealed that a top defense adviser was recommending that significant levels of U.S. military forces should stay in Iraq to ensure its stability, Obama was sending clear signals that he was indeed moving in that direction.

In an interview with the Military Times on Monday, Obama suggested he was indeed rethinking his plan for a complete military pullout. Instead, he said, any troop withdrawals would be done "in a deliberate fashion in consultation with the Iraqi government, at a pace that is determined in consultation with Gen. (David) Petraeus and the other commanders on the ground."

If Iraq's security was in any danger at that time, "then that's going to have to be taken into account," he said. In other words, conditions on the ground, Iraq's security needs and the American commander in Iraq will shape and influence his decision.

Obama campaign representative Robert Gibbs dropped deeper hints of a more gradual withdrawal strategy Monday, telling CNN, "Obviously, you have to give commanders on the ground flexibility. We'd be crazy not to."

In other words, Barack Obama has abandoned the core promise of his presidential candidacy that he would end the war by withdrawing all U.S. combat forces from Iraq within 16 months -- a preposterous position in the first place.

Obama's new position is that it may take longer than that -- a lot longer. He promised his supporters "change you can believe in," but now, how can they believe anything he says?