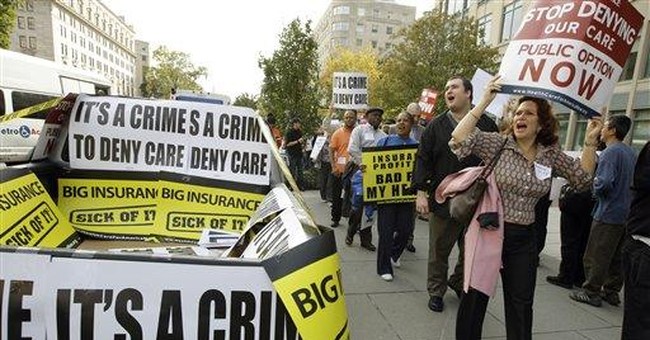 President Obama is planning to reduce the cost of medical care by taxing it!

The most recent Gallup Poll reflected that 49 percent of respondents said they believed that the Obamacare plan will increase their health care costs. Only about 20 percent said it would lower them. It is taxes like these that substantiate this kind of concern.

The origins of this new medical device tax are troubling, as well.

The medical device industry had its day at the White House, as did the insurance industry, the drug makers, the nurses and the doctors. In turn, each group heard the White House request that they come up with voluntary cuts in their health care costs and support Obama's proposed changes in return for assurances that Congress would not impose deeper cuts (or, in the case of the doctors, that it would actually rescind cuts already scheduled under current statutes).

But, unlike all these other groups, the medical device industry refused the deal. This posture enraged the tyrants in the White House, who vowed to punish the industry with cuts imposed by Congress. The result was a decision by the revenue-hungry Senate Finance Committee to extract billions in funds from the industry.

The legislation does not work like a sales or excise tax. Rather, it follows the model of the punitive tobacco settlement imposed on cigarette companies in the '90s. It assesses an industry-wide payment that firms must make in proportion to their market share. It bars them from passing along the cost of the assessment by charging more for certain basic products, but allows them to raise the price of others to raise the funds for the fee.

So, the result will be that virtually every piece of advanced surgical equipment will be subject to a price increase to meet the levy from Washington. No matter that these devices often make the difference between life and death and that, in effect, taxing them raises the cost of vital treatments. The vengeful White House will have its pound of flesh from the medical device industry for daring to be independent and refusing to knuckle down to administration pressure.

This tax, imposed in a spirit of haughty arrogance, falls on totally inappropriate objects. Valves, prosthetic limbs, pacemakers, hearing aids and such are essential therapies that make life longer, better and less painful. To tax them makes no sense -- except in the world of sharp elbows and interest group politics that grips this take-no-prisoners and show-no-mercy White House.