Out Of Florida: The Front-Runner 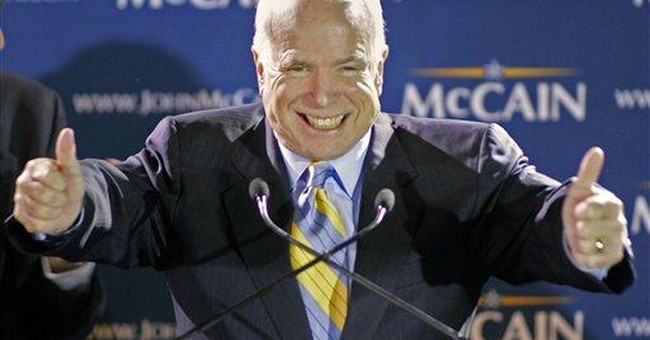 After the Florida primary, John McCain is the clear front-runner in the Republican primaries, the first we've had since Rudy Giuliani vacated the role.

Underscoring his victory is a fascinating fact newly evident, now that we have had a Republican primary in a state which did not permit Independents to participate: The GOP primary electorate isn't very conservative.

Asked how they'd characterize their own ideology, only 27 percent of Florida GOP voters said they were "very conservative." They backed Mitt Romney by 44 percent to 20 percent. Another 34 percent said they were "somewhat conservative," and they broke even between Romney and McCain 33-32.

So it is not so much that McCain converted conservatives, but that Romney ran out of them - there weren't enough of them to give him the Florida delegation.

Being the front-runner in the Republican primary is no small matter. The GOP believes in following the leader. The absence of a designated heir-apparent has been evident throughout the party's 2008 contest. Now that McCain is the front-runner, the legitimist voters in the primary will likely move toward him. Giuliani's expected endorsement of McCain will only exemplify this trend and hasten it along.

McCain comes out of Florida as the putative nominee in the eyes of Republicans - and it is up to Romney to take it away from him.

On the Democratic side, Hillary Clinton's 50-33 victory over Barack Obama is not as much of an indication of momentum as it would seem. Exit polls suggest that, among those who decided whom to support in the final three days, Obama tied Hillary, 35-35. Those who decided in the preceding month backed Hillary by 59-29, giving her a seemingly decisive win. But the trend is clearly in Obama's favor.

Florida is also the time to write the political obituary for Rudy Giuliani. A triumphant career and a mass of great potential has been obliterated by political malpractice on the part of his motley crew of advisers. If there were such a thing as a product-liability suit against political consultants, Rudy wo uld have a hell of a case.

As McCain and Romney square off on Super Tuesday, the national-security issue about which McCain speaks with eloquence will battle the economy, which Romney claims as his expertise, for preeminence.

But look for a McCain surprise. If his campaign people are on their toes, they'll examine Romney's record in the companies he "turned around" for how many layoffs resulted. If his efforts seemed to cost people their jobs, the economy issue could backfire on Mitt.

The general-election polls show Romney 12 points behind Hillary Clinton and McCain tied with her. If she's the Democratic nominee, McCain has two big advantages: He can get Hispanic voters (thanks to his sponsorship of immigration reform) and he can attract Democrats and Independents who backed Obama and are turned off to Hillary as a candidate.

Romney, without any appeal to Latinos and not much to moderates or Independents, would be a far easier opponent for the Clintons to take on.