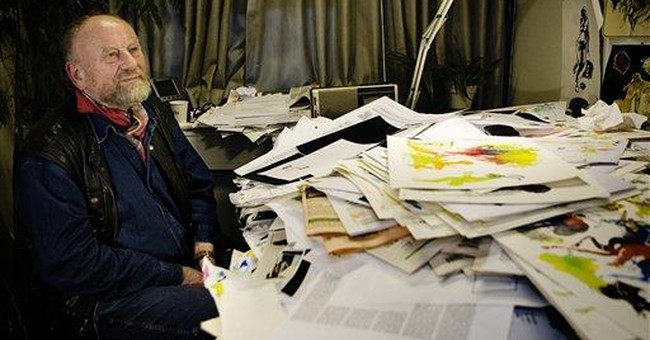 Pakistani jihad death squads were much in the news this week. In Peshawar, Pakistan, they bombed a marketplace, claiming more than 100 lives, and in Chicago, they were thwarted, according to an FBI affidavit, from carrying out a planned attack on a newspaper in Denmark to kill two Danish journalists, cartoonist Kurt Westergaard and cultural editor, Flemming Rose.

It's important to link these events to put them into proper perspective. According to the FBI, the Danish operation -- busted in Chicago with arrests of David Coleman Headley (aka Daood Gilani) and Tahawwur Hussain Rana, both of Pakistani origin with American and Canadian citizenship, respectively -- was planned in conjunction with Pakistani jihadists. One is identified as Individual A, a member of Lashkar-e-Taiba (LeT), the jihadist group behind the 2008 Mumbai massacre, among other atrocities. The other is identified as Ilyas Kashmiri, operations chief of Harakat-ul-Jihad Islami (HUJI). Bill Roggio of the Long War Journal writes that Kashmiri is "considered by U.S. intelligence to be one of Al Qaeda's most dangerous commanders." Roggio further notes that LeT and HUJI, along with several other Pakistan jihadist groups, including Laskhar-e-Jhangvi, Jaish-e-Mohammed, have merged with Al Qaeda in Pakistan and operate under the name Brigade 313.

While the triggermen behind the Peshawar carnage have not been identified yet, it is highly likely, to say the least, that they come from this same jihad network.

In the Pakistani case, the terror further enmeshes the United States in misbegotten efforts to "stabilize" the jihadist-riddled government, but that serves Islamic law as well. Such terror further asserts the power of those who bring Islamic law to a nation that already embraces its brand of "justice" as the findings of an August Pew poll confirm yet again. An overwhelming 78 percent of Pakistanis believe those who leave Islam should be killed, 80 percent favor whippings and cutting off hands for crimes like theft and robbery, and 83 percent favor stoning adulterers.

And how many billions did the Obama administration just shovel down that hole? As a condition of such aid, Pakistan should be required to dismantle its nukes and trust key components to us for safekeeping while the threat of seizure by "extremists" endures. Isn't that what a bona fide ally would do?

In the Danish case, the Islamic terror is designed to punish and make examples of the two men chiefly responsible for the revolt that began four years ago against the emergence of Islamic law in Denmark. Flemming Rose, having discovered that a Danish publisher couldn't find an artist willing to violate Islamic prohibitions on imagery of Mohammed to illustrate a Danish children's book, commissioned 12 cartoons of Mohammed in 2005 to reassert Denmark's freedom of the press, which in this case also meant freedom from Islamic law. Kurt Westergaard's cartoon -- ask your local newspaper to run it, as the Chicago Sun-Times did this week, to assert America's freedom of the press -- has become the symbol of this victorious affirmation of free speech for which Denmark remains under continued threat of Islamic attack, as this Pakistani plot dramatically shows.

So, what to do about which assault? In Pakistan, Secretary of State Hillary Clinton told government officials: "I want you to know that this fight is not Pakistan's alone. This is our struggle as well." To Denmark, the U.S. government said nothing.

This is exactly backward. Pakistan's struggle, feckless and conflicted as it is has been and will continue to be (Roggio also reports, for example, that Ilyas Kashmiri is a "longtime asset of Pakistan's military and intelligence services") is not America's fight. Rather, this fight is among factions of Islam, and far from being a player in this treacherous game, the United States is a dupe. If Pakistan's nuclear arsenal poses a dire threat to the West (like Iran's), the correct military solution is its destruction, not nation-building around it.

Clinton's statement of solidarity should have been directed to Denmark, a tiny Western nation valiantly asserting the core principles of liberty, and subsequently threatened for doing so with catastrophic attack, meted out according to Islamic law. It is Denmark's struggle that is our own, or should be.

Will we ever learn?