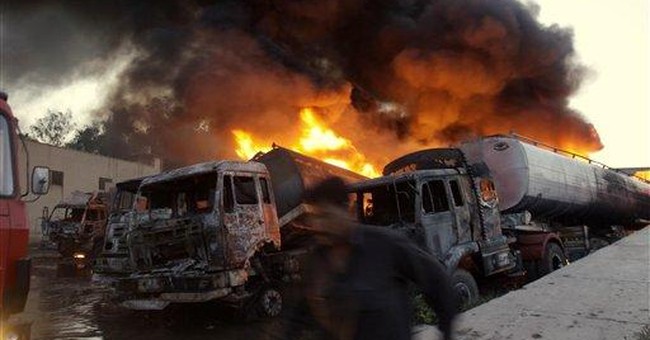 Saw an unforgettably stark photo of Taliban fighters in Afghanistan's Wardak province, the same province Joint Chiefs Chairman Adm. Mike Mullen visited this week: Eight robed, turbaned fighters, a sandy ridge, a cloudy sky. All that was missing was the incoming American drone strike to turn the men into dust.

Question: Should the United States call in that strike? How great a security threat to the United States do these eight barbarians pose? How many dollars, how much blood is it worth to our nation to pulverize them into that lunar-like landscape?

I recently read a military e-mail from Afghanistan that marveled over a similar scene: "As far as BDA (battle damage assessment) goes, check this one out. 2 GBU 36's (bomblets) dropped the other day on estimated 6 guys!!!! That is half a million dollars on 6 guys!!!!" The e-mailer guessed that all the sniper ammunition the jihadists have used in the whole war hasn't cost close to that.

The point is, the United States is getting a lot of bang for a lot of buck but not much else. Don't get me wrong: If killing small bands of Taliban is in the best interest of the United States, I'm for it. But I do not believe it is -- and certainly not as part of the grand strategy conceived first by the Bush administration and now expanded by the Obama administration to turn Afghanistan into a state capable of warding off what is daintily known as "extremism," but is, in fact, bona-fide jihad to advance Sharia (Islamic law). Anybody remember Sisyphus? Well, trying to transform Afghanistan into an anti-jihad, anti-Sharia player -- let alone functional nation -- is like trying to roll Sisyphus' rock up the hill.

This is not to suggest that there is no war or enemies to fight, which is what both the Left and the Paleo-Right will say; there most certainly are. But sinking all possible men, materiel and bureaucracy into Afghanistan, as the Obama people and most conservatives favor, to try to bring a corrupt Islamic culture into working modernity while simultaneously fighting Taliban and wading deep into treacherous Pakistani wars is no way to victory -- at least not to U.S. victory. On the contrary, it is the best way to bleed and further degrade U.S. military capabilities. Indeed, if I were a jihad chieftain, I couldn't imagine a better strategy than to entrap tens of thousands of America's very best young men in an open-ended war of mortal hide-and-seek in the North West Frontier.

I decided to ask someone with real military experience how we could fend off jihad without further digging ourselves into Central Asia. I called up retired Maj. Gen. Paul Vallely, one of the few top military leaders who talks on the record, to ask for his strategy recommendation for Afghanistan.

Let Afghanistan go -- music to my ears, particularly given the source is no Hate-America-First professor or Moveon-dot-org-nik, but a lifelong patriotic conservative warrior. "There's nothing to win there," he explained, engaging in an all-too-exotic display of common sense. "What do you get for it? What's the return? Well, the return's all negative for the United States."

The general continued: "This doesn't mean giving up battle. What it means is you transition to a more realistic, affordable strategy that keeps them (the jihadist enemy) from spreading."

Such a strategy, Vallely explained, relies on "the maximum use of unconventional forces," such as Navy SEALS and other special forces, who can be deployed as needed from what are known in military parlance as "lily pads" -- outposts or jumping-off points in friendly countries (Israel, Northern Kurdistan, India, Philippines, Italy, Djibouti ... ) and from U.S. aircraft carrier strike groups. Such strike groups generally include eight to 10 vessels "with more fire power," the general noted, "than most nations." These lily pads become "bases we can launch from any time we want to," eliminating the need for massive land bases such as Bagram Air Base in Afghanistan, by now a small city of 20,000 American personnel who continuously need to be supplied and secured at enormous expense.

"There's no permanent force," the general said. "That's the beauty of it." We watch, we wait and when U.S. interests are threatened, "we basically use our strike forces to take them out, target by target." This would work whether the threat came from Al Qaeda, Pakistani nukes or anything else.

He continued: "This idea that we're going to go in and bring democracy to these tribal cultures isn't going to work. If we have a problem with terrorist countries, like Iran, it's a lot cheaper to go in and hit them and get back out."

In other words, don't give up the battle; just give up the nation-building. "It's up to somebody else to build nations," the general said. "Not us."

He went on: That old myth that (Colin) Powell had -- if you break it you own it -- that's a myth. You break it, you decide whether you own it. You don't have to go in and own it."

And especially not when it is Islamic land that doesn't belong in the West.