Deroy Murdock
|
Posted: Nov 10, 2021 12:01 AM
Share   Tweet
The opinions expressed by columnists are their own and do not necessarily represent the views of Townhall.com. 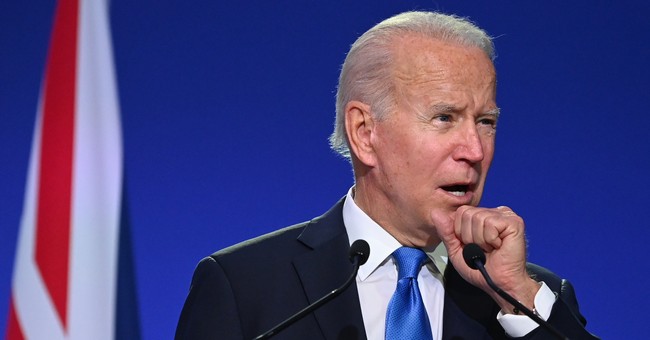 Where is it written that Republicans must ride to the rescue of Democrats as they teeter at a cliff's edge, seconds from tumbling backward into the Grand Canyon?

Last Friday night found Biden's presidency and Pelosi's speakership on the verge of metaphysical collapse. Just days after the Democrats took a drubbing in off-year elections, from Virginia to New Jersey to Seattle, neither Biden nor Pelosi seemed capable of getting his $1.2 trillion Bipartisan Infrastructure Framework (BIF) out of the House and onto his desk for signature.

As Biden's approval numbers careened downhill, he further embarrassed himself by dozing off at a global-warming confab in Glasgow. He then denounced as "garbage" a Wall Street Journal story about his plans to pay $450,000 per person to illegal aliens for "psychological trauma" related to family separation after breaking into America, uninvited. The White House backtracked on Thursday and said that Tuesday's "garbage" was official policy, with which Biden is "perfectly comfortable."

With so very much at stake, Pelosi called a vote on the infrastructure bill for late last Friday night. With the narrowest Democrat majority since 1881, Pelosi could afford to lose no more than three votes. If just four Democrats voted Nay, the 1,039-page BIF would fail on the House floor and plunge Biden and Pelosi into even deeper humiliation and political peril.

When the Yeas and Nays were tallied at 11:24 p.m., Pelosi lost six Democrat votes! Far Left "Squad" members, to their credit, stood firm on their neo-Marxist principles and voted against the bill because the even larger, further-Left Build Back Better Act had yet to pass. These Democrats made their threat and kept it:

So, the infrastructure bill crashed to the ground like a decrepit overpass, right?

In a truly staggering and inexplicable turn, 13 Republican House members voted Yea on BIF, providing Pelosi the majority that she desperately needed plus a safety margin of 10 votes. Biden's baker's dozen of renegade Republicans also gave him bragging rights that his pet bill passed with bipartisan votes, both in the House and the Senate. BIF passed the upper body in August, 69-30, with Senate GOP leader Mitch McConnell and 18 other Republicans helping drag Biden's 10-percent infrastructure/90-percent Green New Deal/welfare calamity across the finish line.

It would have been bad enough if Pelosi had enough Democrat votes to adopt this bill. Once Democrats posted a majority on the House's electronic-vote scoreboard, some Republicans in marginal districts might have reckoned, "Well, BIF has passed. It's too late to kill it. So, why not leap on the bandwagon and cheer up some Democrats and Left-leaning independents back home?" That's not exactly Profiles in Courage territory, but one might understand a few such Republicans trying to pry opportunistic advantage from a fait accompli.

Likewise, if Biden were popular and beloved, these 13 might have been on firmer ground, much as congressional Democrats were when they backed President Reagan's budget cuts and tax relief after he so elegantly survived John Hinckley's assassination attempt in March 1981.

But Biden increasingly is loathed. Among 1,000 registered voters whom USA Today and Suffolk University polled from November 3 - 5, only 37.8 percent approve of Biden as president while 59 percent disapprove. Among independents, Biden's numbers are deathly: 28 percent approve, 67 percent disapprove. As for re-election, 64 percent -- including 28 percent of Democrats -- do not want Biden to seek a second term. If the 2020 election were repeated today, respondents would vote 40 percent for Biden and 44 percent for Trump.(Margin of error: +/- 3.1 percent.)

Biden has “been wrong on absolutely everything he’s touched,” Lynda Ensenat of Louisiana told the pollsters.

Thirteen Republicans smelled the stench of failure around Biden and said, "Sign me up!"

Biden's new best friends might be forgiven had they traded their votes for something of value, perhaps an agreement to delete the five or six most obnoxious aspects of the far worse Build Back Better Act (BBBA). Or maybe a pledge by Pelosi to extend President Trump's income-tax cuts through 2024. Or maybe a declaration that the southern border wall is infrastructure and should be finished with funds to do so. Or perhaps an ice cream cone for each Republican Yea vote. Or something. Or anything. Instead, these 13 Republicans saved Biden and Pelosi from utter political devastation in exchange for absolutely nothing.

This fiasco recalls last month's Democrat-rescue operation in which McConnell recruited nine other GOP senators to help Democrats pass an extension of the national debt limit.

Again, this was offered as a beautifully wrapped gift in exchange for nothing. Indeed, Schumer did not even have the grace to thank McConnell for betraying his own party. Instead, Schumer decried "Republican brinksmanship" and otherwise beat McConnell in public, like an abusive husband hammering his battered bride.

Had House Republicans remained united and buried BIF in its own rubble, the highly noxious BBBA also would have been crushed amid the hunks of broken concrete and contorted rebar. In short, Biden's entire legislative agenda would be a dusty, twisted ruin.

At that point, confronting the holistic catastrophe of his first not-quite-ten months in office, a badly bleeding Biden would face two choices:

First, retreat to Delaware, descend into the Biden Bunker in Wilmington and spend the rest of his presidency letting his grandchildren play with the blond hairs on his legs.

Second, remain in the game by summoning to the White House McConnell and House Republican leader Kevin McCarthy of California. Biden could have told them, "OK, guys. You've got me cornered. I cannot get anything out of Congress without your help. I need Republican votes to get major bills onto my desk because my party's Squad stands in the way. I need you to steer me around them. I need you at the table so we can craft bipartisan legislation that will win GOP votes so I can sign them into law. Now, what do you need from me so we can move forward together?"

That conversation would not turn Biden into the reincarnation of Ronald Wilson Reagan. However, it would move him from 90 percent of the way toward Venezuela back to 55 or 60 percent. If those 13 Republicans had stood firm, Biden would have had little choice but to break out the Bill Clinton playbook and govern as the centrist Democrat he promised rather than what he has delivered: Hugo Chavez without the pizzazz.

That scenario would have been far more appealing than the ongoing march toward American socialism that Biden is perpetrating. That march now continues, with a far springier step than it had even on Friday afternoon. And for that America can thank House GOP leaders McCarthy and minority whip Steve Scalise of Louisians for not predicting this fine mess nor keeping a tighter grip on their members to stop it from becoming a reality. Their job is to count GOP votes and, if necessary, whip back into line those who go astray, especially to defeat a far-Left president's second-biggest legislative priority. McCarthy and Scalise failed spectacularly at this core duty.

And, of course, Biden would be totally cornered and eager to deal were it not for Friday night's implosion by the 13-member Republican Cave-in Caucus:

Biden's Baker's Dozen and Republicans like them need to be taught a lesson: The GOP does not owe Democrats a goddamn thing. The correct response to Big Government socialists who ceaselessly scream hideous lies about "racist, sexist, homophobic Granny-killing Republicans" is not "Let's be nice."

Deroy Murdock is a Manhattan-based Fox News contributor and a senior fellow with the London Center for Policy Research.