When The Past Comes Back To Haunt

Derek Hunter
|
Posted: Aug 11, 2016 12:01 AM
Share   Tweet
The opinions expressed by columnists are their own and do not necessarily represent the views of Townhall.com. 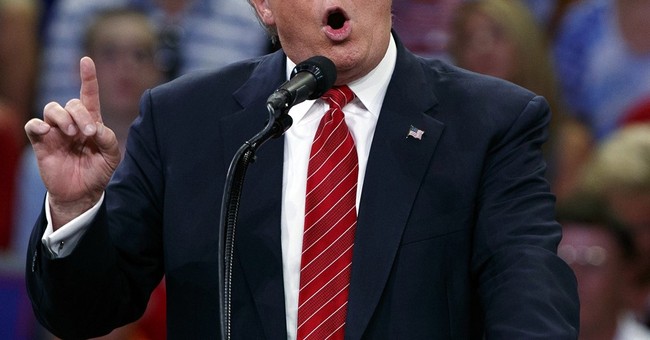 Fervent supporters of Donald Trump are beside themselves with anger over the latest polls and lashing out at anyone in any way critical of the GOP nominee.

Although some of the criticism comes from spite, much of it is legitimate, and the supporters rarely, if ever, address it. That’s because a lot of Trump’s problems result from his own actions – his recent past returning to bite him as he has bitten so many others. Not just his latest stupid off-the-cuff comments that the media has spun into an assassination threat, but also his flippant comments throughout the primary process.

Politics is the last place where the Golden Rule applies. No one does unto others as they would have done unto them. Candidates seek any and every advantage for themselves and demand their opponents be held to higher standards.

It’s always been the case, but rarely does it become as personal as it is with Trump.

Insulting competitors’ family members was a line avoided in the past – Trump gleefully danced across it. Candidates criticize each other all the time – even lying about each others’ proposals. But to mock them as people – to remark on Marco Rubio’s height, Carly Fiorina’s looks, or Jeb Bush’s energy – has not been common.

And what elicited a laugh in a debate or stump speech only deepened the wedges between the eventual candidate and the also-rans whose support he’d ultimately need.

Animosity between competitors during competition is normal, but Trump carried it past the finish line.

To be clear, neither side is without blame. But traditionally, candidates find a way to put forth a united front after a victor has emerged, no matter their personal feelings toward one another. For that to happen, though, the olive branch has to be offered. Trump chose to use that branch to swipe at the vanquished rather than unite the party behind him.

The biggest mistake Donald Trump has made so far – and we’re still three months from Election Day – was to say he neither needed nor wanted the support of his fellow GOP hopefuls. He compounded that self-inflicted wound by refusing to reach out to their supporters as well.

Votes offered up by vanquished rivals are the tap-in putts of the vote-getting world. Those whose primary candidates lost are not the winner’s natural base, but they can be converted easily through basic research, a kumbaya moment between the victor and the vanquished and simply asking.

Of course, this never happened with Trump and a large swath of his fellow GOP candidates. And it’s Trump’s fault.

Some may never have come around -- Jeb Bush probably would’ve been a hard sell. But Trump never publicly tried.

The immediate aftermath of a political defeat is full of raw emotion – dreams have been dashed and feelings hurt. Instead of seeking that private meeting for healing, probably followed by public support for the victor, Trump treated his opponents with indifference or callousness. He shares the blame for this with his staff.

Trump had never run for office before, so he may not have known about these customs. But his staff certainly should have. It points up the importance of having people around the candidate who know what they’re doing, are trusted and can get the candidate to listen. We’ll never know if Trump’s staff failed him here, though given what we do know about their internal dysfunctions, it is likely. Still the ultimate burden falls on the candidate.

In victory, Trump was semi-magnanimous, at least in his first speeches. But then he passed on the opportunity for outreach and chose an end zone dance. Allowing himself to be goaded by a media all too happy to do so, he circled back every time he was asked to pour salt into still-fresh wounds. That plays well in New York media, where getting attention is the goal and the last jab means victory. But running for president isn’t accomplished on Page Six.

Donald Trump’s past actions have rippled into his present, and it’s having an impact on his future. A little humility would go a long way. A little backtracking would improve his chances. A man who has built a lot of buildings needs to build a few bridges. It should start with some backchannel outreach to those whose support he needs to see if that could lead to something public.

Trump spent a lot of time this election season forcing his opponents to swallow his dust. It’s time now for him to swallow some of his pride.