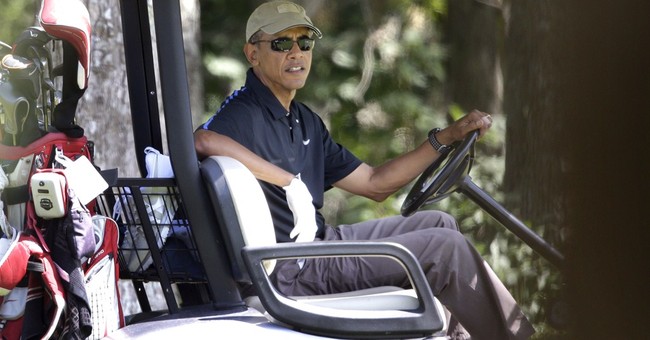 In every cartoon I’ve seen with an ostrich, there comes a scene where it gets scared and buries its head in the sand. Ostriches don’t do this in real life, but it came to symbolize, in cartoons at least, the concept of thinking something bad will go away if you simply ignore it. It’s foolish – some would say stupid – but it appears to be the crux of President Barack Obama’s foreign policy.

There are times when a president has to be president, even on vacation. This is the part of the job President Obama seems to hold in contempt – the doing of it. The trappings – the motorcade, Air Force One, hanging out with celebrities, being a celebrity himself, having nearly every whim catered to – are the most appealing part of the job. But it is a job, and he sought it twice. He just doesn’t seem to like doing it.

This isn’t a new development. This president has been checked out to one degree or another since he checked in, but he at least paid lip service to the concept of domestic policy. He didn’t involve himself with the details of many of the laws Democrats in Congress passed; he just gave speeches in support of their concepts and signed them. But when policy issues crossed salt water, he lost all interest.

After a series of groveling speeches trying to make up for his predecessor, who just happens to be more popular than he is now, the president retreated to the comforts of his office and buried his head to the realities of the rest of the world.

Aside from occasional speeches and selfie-filled funerals or summits, Obama turned his gaze domestically and green-ward, to the golf course.

But the funny thing about the rest of the world is it doesn’t go away simply because you wish it would. The troubles of the world have a way of existing regardless whether you pay attention to them.

Afghanistan is on the verge of collapse. Libya is in anarchy. Israel is being attacked hourly by the terrorists in Hamas. Russia is putting its band back together. China is making aggressive moves toward us and Japan. And ISIS is executing people like it’s an Olympic event. Meanwhile, the president has given a few speeches and shaved two strokes off his handicap.

Minutes after dispassionately reading a prepared statement on the beheading of American journalist James Foley, the president ripped off his tie-less suit like it was held together with Velcro, and rushed to the first tee. When questioned about the smiling and laughing pictures that hit the press the next day, his staff warned not to read too much into that – he really was upset, just hiding it well…in a sand trap, giggling with friends.

Meanwhile, back in the real world, ISIS was not laughing or golfing. It was making it clear it wants war with the United States. This claim, which al Qaeda also made clear before 9/11, was met with the same indifference as bin Laden’s.

When asked about this, Marie Harf, State Department spokeswoman, said, “This is not about ISIL versus the United States.” (The administration changes the last “S” to an “L” so people won’t remember Obama failed to lead when these terrorists could have been marginalized to the point of irrelevance when they were forming in Syria.) When pressed about ISIS’s declaration, Harf indignantly replied, “Well, they can say whatever they’d like.”

The ostrich’s head is firmly planted in the sand.

The Obama administration won’t acknowledge ISIS is at war with the United States because it does not want this to be so.

At least that’s how it used to be. Now, when people with more combined fanaticism than our enemies in 1941 slowly slice the head off an American citizen, videotape it and release it to the world…out president courageously fights through his outrage by golfing.

We’ve returned to a pre-9/11 mentality in our foreign policy, only before 9/11 it was somewhat justified because 9/11 hadn’t happened yet. Those who haven’t seen the Foley video, which is most of the American people, have no idea of the true nature of the threat we face. Hearing or reading a description of the barbarism does not do it justice.

Leaders of ISIS want Americans to see it because they think it will scare us. The Obama administration doesn’t want us to see it because it knows it will enrage us and increase the pressure on him to act. If the Obama administration is correct, we are still that nation that saved the world from fascism all those decades ago. If ISIS is right, we’ve become the ostrich. And it never ends well for the ostrich.