When All Else Fails, Nail Yourself To The Cross 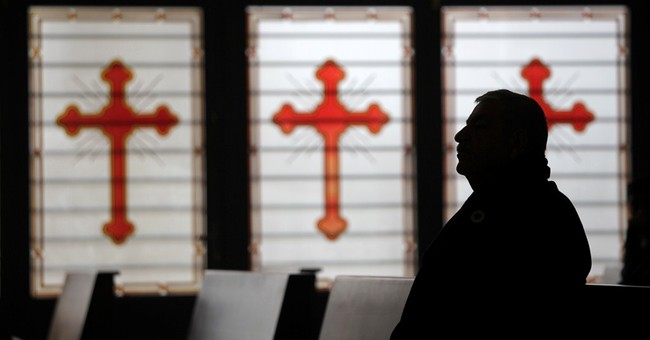 Personal responsibility has gone the way of the Dodo. It’s dead. Apologies are no longer unequivocal, they are qualified. People aren’t “sorry,” they’re “sorry if anyone was offended.” We have become a nation of victims whose mistakes, missteps and downright lies are absolved through deflection, not penance. We’re now a nation of martyrs, misunderstood by others seeking only to change the subject and move on.

The most famous example of this “I’m sorry you…” were too stupid to know I was lying is, of course, President Obama’s “lie of the year.” Dozens of times, he unequivocally reassured skeptical Americans they could keep their doctors and health insurance plans if they liked them. Unbeknownst to us, this was accompanied by an unspoken parenthetical – something along the lines of “unless we deem otherwise – that he never vocalized and denied until the claim began to rival Baghdad Bob’s declaration of Iraqi military superiority even as American tanks entered over his shoulder.

“Now, if you have or had one of these plans before the Affordable Care Act came into law and you really liked that plan, what we said was you can keep it if it hasn’t changed since the law passed,” the president said

Once he’d reached the tipping point and the lie no longer was operable, the president’s apology was akin to spouse caught cheating saying, “I’m sorry you gained so much weight that I don’t find you attractive,” then insisting the apology has occurred and the spouse should just get over it.

As the victims of his lies dealt with their new government-imposed reality, the president said, “I am sorry that they are finding themselves in this situation based on assurances they got from me.” Those “assurances” were lies, for which there still has been no apology.

He continued, “We've got to work hard to make sure that they know we hear them and we are going to do everything we can to deal with folks who find themselves in a tough position as a consequence of this.” He’s the martyr here, going to “work hard” to help the people who believed his lie. His actions caused millions of Americans’ lives to be traumatized, the “consequence of this,” so to speak, but he’s on the case so don’t worry about it.

The president knows the difference between apologizing and saying you’re sorry. One is admitting you were wrong, the other is saying a word. One is sincere, the other is semantics to which other people can attach meaning that may or may not be there.

It’s become the norm in America to offer a non-apology apology.

Celebrities and politicians are at the forefront of this new martyrdom, handing out “I’m sorry if” or “I’m sorry you were” non-apologies as if they’re candy on Halloween. But they aren’t candy – candy at least satisfies for a little while.

MSNBC’s Melissa Harris-Perry offered such an apology after attacking and mocking the infant grandson of Mitt Romney. Her non-apology apology was delivered via Twitter, not reality, and offered “Without reservation or qualification,” then qualified repeatedly. She “wanted to immediately apologize” two days after her attack, then offers her own life story to paint herself as a victim.

Harris-Perry is an example of the latest trend – justifying ones own failures or shortcomings by blaming someone else.

Kluwe played for the Minnesota Vikings until last year, when he was released by the team. Professional sports is one of the last true meritocracies – you perform and you’re paid well, you don’t and you’re replaced by someone who does. Simple.

But Kluwe doesn’t see his career’s end that way. After being paid millions to kick a ball a few times one day a week for 16 weeks a year, he’s a victim. He nailed himself to the progressive cross in a piece entitled, “I was an NFL player until I was fired by two cowards and a bigot.” In it Kluwe claims he was “fired” because he supported gay marriage and special teams coach Mike Priefer is a homophobe.

It can’t be that there was a better man for the job, Kluwe has to be a victim. Whether Priefer is or isn’t a homophobe is irrelevant. The team found a better punter, and Kluwe seems unable to accept that. He blames his release on his politics. Poor baby.

The timing is interesting, too … a few days after the Vikings’ last game. He held his tongue in case the homophobes’ punter got hurt and he might be re-signed.

The NFL, and professional sports in general, tolerates almost anything as long as you do your job well and win. Charges of murder, rape, drugs, pretty much anything you can imagine, are compartmentalized for players who perform. If Kluwe were a valuable member of the Vikings, he would still be a member of the Vikings. He wasn’t, so he’s not.

As of now, none of Kluwe’s teammates have come forward to back his claims, so either he’s lying, he’s the only one who heard it, he is angry and lashing out for his own failures or 53 other professional athletes all feel too cowed by this organization to speak up in his defense. Given the fact he hasn’t been picked up by any other team, my money is on “angry at his own failures.”

But what Kluwe wrote appears to hold the key to his failure more than anything he charges. “If there's one thing I hope to achieve from sharing this story, it's to make sure that Mike Priefer never holds a coaching position again in the NFL, and ideally never coaches at any level,” he wrote. The anger toward the man who was his coach, who he sees as firing him, shows a level of bitter selfishness that no sports team would want in its locker room. It’s toxic.

Then there’s Rachael Sacks. She is a rich kid going to college in New York who wrote a blog post complaining that she won’t act poor to fit in or make other people like her. Fine, whatever. If there’s ever a problem to have, that’s the one.

But the post went viral, and the media picked up on it. Soon after, the cross came out.

Sacks, it turns out, is a lesbian. This was not mentioned in the stories about her rant, which was an affront to her – even though it is irrelevant to what she wrote, Sacks saw it as her get-out-of-social-media-jail-free card.

Sacks, like Kluwe, can’t accept that maybe her actions, rather than her beliefs, put her in the situation she is in.

Sacks has a better case to make for victimhood, but it’s not that she’s gay. It’s that she’s a dumb college student no one ever heard of, nor should have. She’s a victim of a slow news day in New York City, which should’ve been the case she made. But that‘s not as sexy as “victim of bigotry,” the new default position for those determined to prove their problems are not of their own making.

It’s hard to make the case that a college kid or a washed-up NFL player shouldn’t nail themselves to their own crosses to deflect reality from knocking down their doors when television hosts and even the president of the United States are doing the same thing. And if you have a problem with that, I’m sorry.

UPDATE: On her Saturday morning show (after I’d submitted this column), Melissa Harris-Perry left the Twitterverse and offered an apology to the Romney family and “transracial families” everywhere. It seemed sincere, she even cried a little. That she was moved to tears and choking up over something she should’ve known better then to do in the first place strikes me as odd, but whatever. That she felt the need to address “transracial families” shows how obsessed she and her fellow progressives are about race. This wasn’t about race, it was about her and her guests mocking the grandchild of someone they disagree with politically. Her tearful apology to “transracial families” implies it would’ve been OK had the infant they mocked had the same melanin level as the man they hate for disagreeing with them. In addition to innocence of the child, the hate that motivated their actions is the problem, not the skin of the victim.

Hopefully Melissa Harris-Perry will realize that the easiest way to avoid apologizing to anyone in the future is to not be a hate-filled jackass in the first place.