The Myth Of JFK 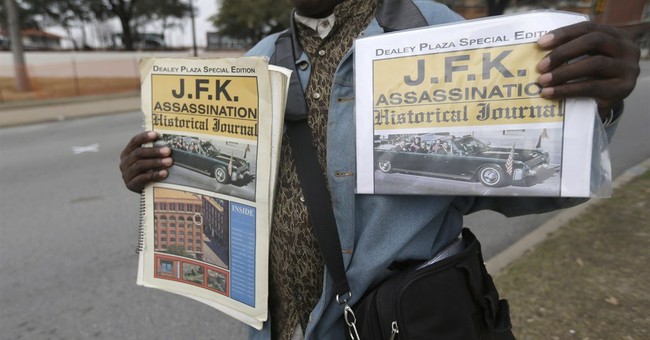 Tomorrow is the 50th anniversary of the assassination of President John F. Kennedy. Few events and people have had more words written about them than that day and that man. But, and I have to be honest here, I don’t get it. In fact, I’ve never gotten it.

Yes, losing a president to an assassin’s bullet is a traumatic national event, something we’ve fortunately not been through again since – although there have been some close calls. And it’s the one event where everyone over the age of 55 seems to recall exactly where they were when they heard the news. But I get that part. My generation has 9/11, which is a similar common memory for everyone who lived through it. What I don’t get is how the Kennedy assassination seems to have affected those who were alive for it more than the events of that awful September day.

The life of JFK is, perhaps, the most documented life ever lived. People alive in his time, whether they voted for him or not, or even whether they were old enough to vote for him or not, have a romanticized vision of him and his life that simply doesn’t comport with the reality of objective observation and knowledge gained over time.

Not everyone, certainly, shares this view, but it cuts a wide swath through all demographics and has the stamina of 50 years behind it.

This is where you lose me.

President Kennedy remains popular with journalists and historians, but was not a popular president with the American people at the time. His re-election in 1964 was not certain. It was, in fact, a long shot at the time of his murder.

His presidency was, for the most part, a non-event. The Bay of Pigs was a fiasco, the Cuban Missile Crisis brought us to the brink of nuclear war, cost us missiles in Turkey and doomed Cuba to the underside of the Fidel Castro’s boot to this day.

On civil rights, something for which President Kennedy receives much credit and praise, he did little more than pay lip service to the concept. My friend and a host of the C4 Show on WBAL right before my show, Clarence Mitchell IV, whose grandfather was Clarence Mitchell Jr., the chief lobbyist for the NAACP during the Kennedy years, tells me, “My grandfather always said President Kennedy, at the insistence of his brother Bobby, was not a champion of civil rights, that he was actually an obstacle. He kept things slow because he wanted the support of southern Democrats. It wasn’t about right and wrong with them, it was about what would get them the most votes.”

President Kennedy is given credit for the Civil Rights Act of 1964, but he had little to do with it aside from having spoken on the subject a few times. In fact, C4 tells me that in August of 1963 there was a “big meeting” of civil rights leaders at the White House with the Kennedy brothers because there was talk that they might not endorse JFK’s reelection. They were promised what politicians always promise voting blocs they’re stringing along – action after the election. Tragedy intervened, so we’ll never know what he might have done, but we do know what he did do and that wasn’t much at all.

In fact, it seems nearly every positive development of that era is somehow credited to JFK – even those he had little to nothing to do with. It’s just been credited to him, or imposed on him, as part of the myth-making surrounding “Camelot.”

President Kennedy was a great orator and a master at public relations. He also had a press corps that adored him, thus insulating him from reality in the annals of history. (Sounds vaguely familiar, doesn’t it?)

The “Camelot” legend was myth, constructed to obscure the reality of a despicable man elected through fraud and an unholy alliance with the mafia in Chicago. The real John F. Kennedy was a womanizing misogynist, a spoiled brat who ran for the U.S. Senate for lack of anything else to do and to feed his controlling father’s ego. Just eight years and very few accomplishments later, he sought the presidency for much the same reason.

He was a reckless man, sleeping with interns, girlfriends of mafia bosses, Russian spies and seemingly anyone else willing. He took his job seriously enough, but in perhaps the most blatant act of corruption since Teapot Dome, appointed his own brother Attorney General of the United States. Kennedys are loyal to Kennedys first; there is no second. The idea that Robert Kennedy could be trusted to, if called for, investigate possible corrupt actions of President Kennedy is laughable.

After his tragic assassination, the Kennedy myth-making started and hasn’t stopped. It started with the coaching of 3-year-old John F. Kennedy Jr. to salute his father’s coffin for the cameras as the procession passed, and it continues to this day. Even his gravesite is a testament to that myth.

President Kennedy is buried at Arlington National Cemetery, and rightfully so. He did serve our country with honor in World War II. But real estate at Arlington is at a premium, with our heroes buried in close proximity to each other to accommodate all who deserve it. Yet the JFK gravesite sits alone in a large otherwise-vacant plot. I don’t begrudge him the eternal flame – though that seems a bit much. But his wife is buried next to him in spite of remarrying, and his brother, Robert, is buried in the special "Kennedy only section" of the cemetery too.

This “devout Catholic” family exemplifies hypocrisy on every level – from their bootlegging beginnings to their philandering lifestyle, there is very little about their legend that stands up to even the most cursory of scrutiny. Despite this fact, hours of television time, gallons of ink and gigabytes of web-space will be dedicated to how extraordinary JFK was, how they all were.

There’s something to be said for being an inspiration, and JFK was – though far more after his death than when he was alive. But there’s more to be said in favor of reality.

It’s conventional wisdom to say the nation lost its innocence 50 years ago at the hands of a left-wing assassin in Dallas, and in some ways that’s true. But given the continuing naïveté surrounding the presidency of John F. Kennedy and the entire Kennedy clan, it’s clear there’s still a lot of innocence, willful as it may be, around today.

An earlier version of this piece mistakenly said Robert Kennedy did not serve in the military. He did. He was a Naval Officer on the USS Joseph P. Kennedy which patrolled the Caribbean during World War II. The author regrets the error.