We Have a Moral Divide, Not a Racial One 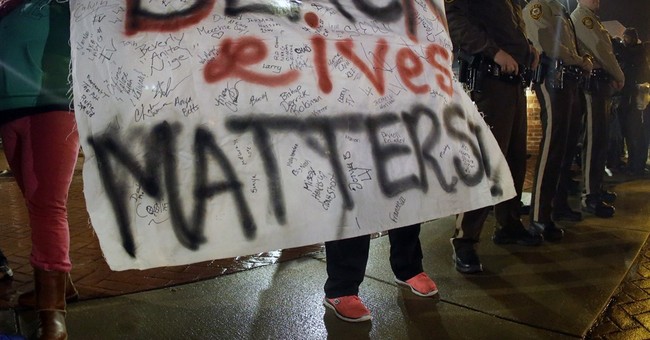 As we await protests and riots scheduled for Ferguson, Missouri, and elsewhere if a grand jury in Missouri does not indict the white officer who shot and killed Michael Brown, a black teenager, a little moral clarity is called for.

For decades now, we have been told that there is a black-white divide in America. The problem with this belief that is that it renders moral judgment -- of white police, of black crime and black incarceration rates, of white judges and jurors, and of black riots and protests - impossible.

It is, we are told over and over, all about "perceptions" -- a "black-white divide" in the way each race perceives racial matters. This is how it works:

Many blacks see racism almost everywhere -- especially in arrest, conviction and incarceration rates, and in white police interactions with blacks. On the other hand, whites (specifically, whites who are not on the left) think that white racism has largely been conquered, and therefore blacks' disproportionately high arrest and conviction rates are the result of black behavior, particularly the high out-of-wedlock birth rate that has deprived the great majority of black children of fathers, not white racism.

According to the "black-white divide" way of thinking, these are simply two conflicting perceptions.

It is difficult to overstate how damaging this is.

It denies the very existence of the two pillars of civilization -- objective truth and moral truth.

For every black and every white unwilling to condemn the protests over Michael Brown's killing that took place before any relevant facts came out -- their half-hearted condemnation of the riots notwithstanding -- truth doesn't matter. The protests, riots and liberal condemnations of the white officer began when no one knew anything about the killing.

There is, then, some validity to this notion of blacks and whites having different perceptions. But when the truth is knowable, one of the "perceptions" has to be wrong. Two distinct ethnic or cultural groups may have different perceptions of musical beauty or of what foods they like. But this is not the case regarding truth, which is based on facts. In Ferguson, either the black (and left-wing whites') "perception" is not truth-based or the (non-Left) white (and black) "perception" isn't.

Once the facts comes out, we are no longer speaking of "perceptions." We are speaking of truth and falsehood.

The other victim of this "black-white divide" explanation is moral truth.

If the truth here accords with what the police officer said, he did not commit an immoral act when he shot Michael Brown. On the other hand, if he shot the young man for no good reason, he committed an immoral act.

But according to the it's-all-a-matter-of-perceptions view, there is no moral truth, only black perceptions and white perceptions.

This all accords with the left's views of truth and morality. Neither exists. Visit any university to confirm this.

The left is philosophically deconstructionist. Shakespeare doesn't say what he wrote, Shakespeare says what the reader perceives. The notion of "original intent" as applied to the Constitution is, to the left, farcical. We cannot know the original intent. It's all a matter of individual perception -- or, more precisely, the perception of different socioeconomic classes, different genders and different races.

And, of course, for the left there is no moral truth. Morality is entirely subjective. "Good" and "evil" are individual or societal preferences. No more, no less.

Like truth, morality is just a perception, one determined by an individual's race, gender, and/or class. That is why, for the left, no man can judge any abortion, no matter how late in pregnancy and no matter the reason -- because men do not possess a uterus.

So who are you, white man, to condemn black protests? You have your perceptions and they have theirs. What you have to do is what the Los Angeles Times did during the 1992 Los Angeles riots, during which 53 people died as a result of black rioting -- including 41 by shooting, four in fires, three by beating and two in stabbings. The Times titled its special section each day of the riots "Understanding the Riots."

So, if there are riots following the Ferguson's Grand Jury decision, we'll know how to behave: no judgment, just understanding. After all, there is no truth; there are only perceptions.

Madeline Leesman
Libs of Tik Tok Kicked Off Instagram
Madeline Leesman
News Report Baselessly Fear Mongers How Easy It Is to Buy a Firearm: 'Like Ordering Groceries'
Julio Rosas
We Know Why Police Didn't Breach the Classroom to Confront Texas Shooter...And They Admit It Was a Mistake
Matt Vespa