Debra J. Saunders
|
Posted: Feb 11, 2016 12:01 AM
Share   Tweet
The opinions expressed by columnists are their own and do not necessarily represent the views of Townhall.com. 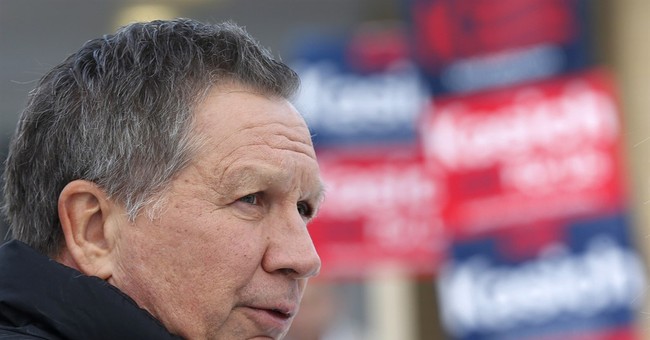 "There are too many people in America who don't feel connected. They've got victories that no one celebrates with them. And they've got defeats, and pain sometimes, that they have to absorb themselves," Ohio Gov. John Kasich said in a speech that celebrated his second-place showing in the New Hampshire primary Tuesday. It was a breakthrough moment. In early GOP debates, Kasich talked too much about his working-class roots and his mailman dad. "I care about poor people," he crowed in a November debate -- as if no one else did. Tuesday night, however, Kasich moved from boasting that he relates to working stiffs to relating to working-class voters.

The flinty Kasich always was a good fit for the Granite State. The former House Budget Committee chairman is a budget hawk; New Hampshire has no income tax. As a pragmatist, he wasn't likely to excel in the Iowa caucus, where the GOP base rewarded obstructionist Sen. Ted Cruz with a top finish. Kasich doesn't go in for kamikaze tactics, hence his cross-over appeal to independent voters who cast ballots in the GOP contest. His years in the House enabled him to forge alliances with New Hampshire heavyweights such as former Sens. John E. Sununu and Gordon Humphrey, who backed Kasich over hopefuls with bigger war chests. He likes to talk. New Englanders like to talk too. Kasich held 106 town halls, and they paid off.

Meanwhile, rivals' super PACs were painting a bull's-eye on the back of Florida Sen. Marco Rubio. So, Kasich got to sit back and watch New Jersey Gov. Chris Christie take down Rubio a few pegs during Saturday night's debate. Christie punctured his own balloon as well. By hanging back, Kasich got stronger.

Now Kasich is a bigger target. Right to Rise, a super PAC that supports former Florida Gov. Jeb Bush, has hit Kasich for forcing "a massive expansion of Obamacare in Ohio." Kasich knew the political risk of taking advantage of an Obamacare provision that fully funded new Medicaid enrollees for the first three years. But he told Fox News that it was his job to "bring money back to Ohio," not watch his taxpayers send money to Washington to subsidize other states' health care.

"If punched, we'll punch back publicly," Matt David of the pro-Kasich super PAC New Day, told me. "Make sure you use the word 'publicly' with that so it doesn't sound like I'm coordinating."

While Right to Rise whispers Kasich is not sufficiently conservative, Planned Parenthood is hitting Kasich from the left. President Cecile Richards told the Women in the World Forum in Los Angeles that, given Ohio's restrictions on abortions, a Kasich administration would be "a complete and utter disaster" for women. Looking to woo hard-core South Carolina Republicans, Kasich strategist John Weaver tweeted, "Ask her to keep it up, please.

He is walking the fine line with an upbeat message that's part Catholic and part New Age. "We're all made to change the world. We're all made to be part of the healing of this world," he told his supporters. Once upon a time, critics, panned Kasich for being too boyish. In this field of GOP contenders, he has found his stride and has graduated to Yoda.