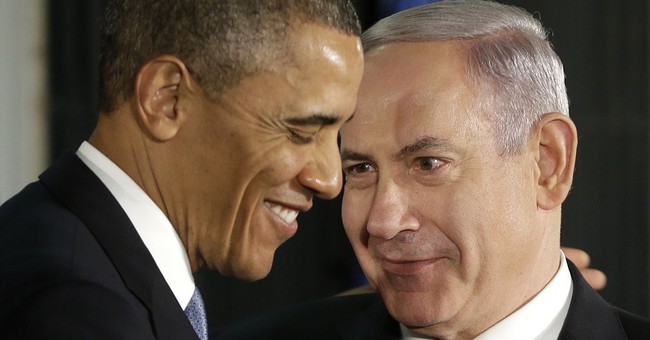 Nancy Pelosi was near tears. After Israeli Prime Minister Benjamin Netanyahu's address to Congress on Tuesday, the House minority leader sent out a press release informing the media, "I was near tears throughout the Prime Minister's speech -- saddened by the insult to the intelligence of the United States" and "saddened by the condescension toward our knowledge of the threat posed by Iran."

Wags lampoon House Speaker John Boehner for getting teary-eyed too readily -- and rightly so. So why would the San Francisco Democrat outdo the GOP leader by announcing that she was getting all blubbery because she didn't like Netanyahu's tone? What next? Will Pelosi issue statements that tell us Russian President Vladimir Putin is getting on her nerves?

Bibi's speech gave a strong reason not to trust the deal being negotiated with Tehran. Not a single nuclear facility would be destroyed. Inspectors document violations; they cannot stop them.

Yes, Boehner was cheeky to invite the Israeli leader to address Congress without White House approval. But then, the White House overreacted by getting all pouty and repeatedly telling the media that Netanyahu's visit, coming so close to Israel's March 17 elections, would be too political. This may be looked at as the moment the Obama White House walked Democrats to the cliff.

Obamaland could have tried to downplay disagreement but instead chose to go down another path. Vice President Joe Biden decided not to show up. Sens. Dianne Feinstein and Dick Durbin invited Netanyahu to a closed-door meeting with Dems to balance the GOP invitation. When Netanyahu declined, they charged that he was being too political. Suddenly, Dems see politics as a dirty word.

Last month, the big story was how Republicans foolishly got sucked into votes that threatened to defund the Department of Homeland Security. Some pundits weren't sure whether to heap scorn or pity on Boehner for failing to herd his caucus. The wound, after all, was self-inflicted.

Now Boehner has overseen the passage of a "clean" DHS funding bill, while Democrats are in a hot seat of their own making. Should they unfriend? Sen. Elizabeth Warren, D-Mass., chose to boycott the speech. If she runs for president in 2016, pro-Israel voters should know they'll always have friends in the Republican Party.

The administration aimed increasingly nasty arguments at Netanyahu -- and they came hurling back like boomerangs. Secretary of State John Kerry faulted Netanyahu for being "profoundly forward-leaning and outspoken about the importance of invading Iraq under George W. Bush." Problem: Kerry voted for the resolution authorizing military force in Iraq.

Obama complained to Reuters that the whole slight was analogous to congressional Democrats inviting a French president to speak after opposing the war in Iraq. "I guarantee you that some of the same commentators who are cheerleading now would have suggested that it was the wrong thing to do," quoth the president. He's right. I thought it was wrong for Pelosi to undercut Bush foreign policy outside U.S. borders in 2007 when she went to Syria to meet President Bashar Assad -- as she refused to meet with Bush to discuss Iraq War funding. I don't remember any Republicans boycotting Pelosi.

This was not a smart fight to pick. According to Gallup, Netanyahu's U.S. favorability rating hit 45 percent, up 10 points from his 2012 numbers. Democrats like to see themselves as the smart guys. Well, the smarty-pants are tied up in a stupid fight.

Iran has an 84 percent unfavorable rating with the American people. Polls show that voters support a pact to curb Iran's nuclear ambition. But how much work would it take to convince Americans that Iran cannot be trusted? As Bibi put it, "just last week, near Hormuz, Iran carried out a military exercise blowing up a mock U.S. aircraft carrier. That's just last week, while they're having nuclear talks with the United States." And: "If Iran wants to be treated like a normal country, let it act like a normal country."