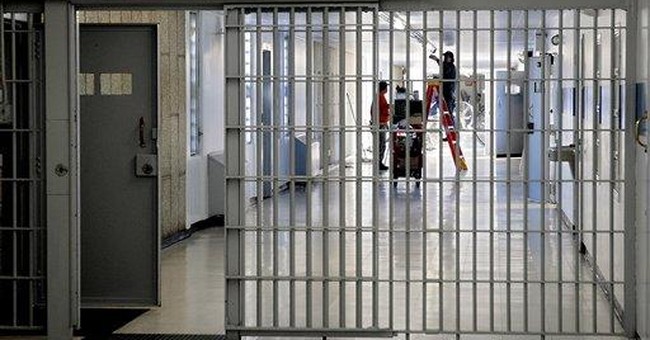 The first thing you have to know when you read that California's 33 adult prisons -- like the state prison in Chino where riots erupted over the weekend -- are operating at 190 percent capacity is that 100 percent capacity means one inmate per cell, single bunks in dormitories and no beds in spaces not designed for housing. Put two inmates in a single cell and bunk beds in lieu of single beds and you get 200 percent capacity.

The very notion of "capacity" has been somewhat misleading. As Department of Corrections and Rehabilitation spokesman Seth Unger noted, "There has always been an understanding that you could put two inmates in a cell and have them safely housed."

Yet that understanding is lacking on the federal bench. Last week three federal judges -- Stephen Reinhardt, Lawrence Karlton and Thelton Henderson -- ordered the state to release more than 40,000 of the 150,000 prisoners in 33 prisons over the next two years. Their rationale: "Overcrowding" impairs prisoners' right to "constitutionally adequate medical and mental health care."

No worries, the judges explained in their 184-page opinion. Releasing one in four prisoners can be done "without a meaningful adverse impact on public safety." The judges seem to think that if they repeat that mantra, they can make it so.

The ruling -- which frequently cites two decisions written by (who else?) two of the three judges -- barely mentions a judge-appointed federal receiver for the prison health care system, Clark Kelso, under whose tenure health care spending per inmate rose to $13,778 per inmate in 2007-2008 -- an 81 percent increase over two years. Inmate deaths dropped from 270 per 100,000 in 2006 to 218 per 100,000 in 2008. It is the failure to note positive developments in prison health care that makes the judges' decision suspect.

By their own reckoning, the judges estimated the number of "bad beds" -- triple bunks, two inmates in a cell and beds in rooms not meant to house prisoners -- at 14,000 at the time of the trial. But they want to release three times as many prisoners because they believe that "crowding" is "criminogenic" -- or likely to produce criminals. That's the agenda driving the opinion.

Gov. Arnold Schwarzenegger's office is likely to appeal the decision on the grounds that a panel of three unelected federal judges does not have the right to run state prisons.

Even still, there must be people in his office who are gleeful about this gift from the federal bench. The latest budget agreement calls for $1.2 billion in cuts in the corrections budget -- with reductions in the prison population by a like amount.

Or as Unger explained, there is little gain in sending the 70,000 parolees with "technical parole violations" to prison and conducting a new battery of diagnostic tests -- to only release them three or four months later. And: "It's not releasing 40,000 inmates as much as it is targeting who comes into state prison in the first place."

But Schwarzenegger tried this in 2004 -- and the result, as the Sacramento Bee reported, was 2,529 fewer inmates in prison on parole violations, but 2,141 more parolees incarcerated for new crimes. Sounds criminogenic to me.