A Mud Fight of Civil Rights 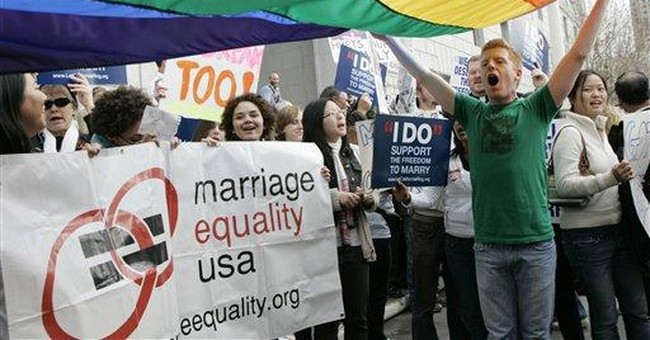 California Supreme Court Chief Justice Ron George looked none too comfortable Thursday morning as he heard oral arguments for and against California's ban on same-sex marriage. George had written the 4-3 decision last May that pronounced California's law against same-sex marriages to be unconstitutional. Since then, however, 52 percent of Californians approved Proposition 8, which amended the state constitution to limit marriage to a man and a woman.

And it's George's job to uphold the California Constitution.

Or as George reminded a lawyer for the anti-Proposition 8 side who had been leaning on the 4-3 ruling, "Today we have a different state constitution, don't we?"

Justice Joyce Kennard was in a similar pickle. She voted with George to legalize same-sex marriage -- despite the passage of Proposition 22, which 61 percent of voters approved in 2000, a statute against same-sex marriage. But as Kennard told attorneys pushing to overturn Proposition 8, the court had to choose between "the inalienable right to marry and the right of the people to change the constitution as they see fit. And what I'm picking up from the oral argument in this case is this court should willy-nilly disregard the will of the people."

That's about it. San Francisco City Attorney Dennis Herrera and other Proposition 8 opponents came up with the highly legalistic argument. To wit: Proposition 8 is invalid because, after the 2008 George decision, it represented a "revision" of the state constitution -- and thus needed a two-thirds vote of the Legislature or an act of a constitutional convention before it could be put on the ballot.

Attorney General Jerry Brown took a different tack. Staff attorney Christopher Krueger argued that same-sex marriage is an "inalienable" right that should not be subject to majority vote. That's choice -- considering that when Brown was governor in 1977, he signed the state law that stipulated that marriage was not simply between two persons, but a male and female.

If Brown runs for governor for 2010, he'll have to explain why he is entitled to use tax funds to overturn the will of California voters. It took Proposition 8 defender Ken Starr -- of Monica Lewinsky blue dress fame -- to observe that "the right of the people is inalienable to control their constitution."

Representing same-sex couples, attorney Shannon Minter told the court that in delineating between married heterosexuals and civil unions for same-sex couples, Proposition 8 "puts those couples in a second-class status. It marks them as second-class citizens. It deprives them of equal liberty, dignity and privacy." This argument, which oozes with victimhood, is much used -- and, I'm sorry, ridiculous.

Before Proposition 8, California same-sex newlyweds did not have equal rights. State civil union laws had conferred the same rights that California bestows on heterosexual married couples -- except the term "married." But the 18,000 same-sex marriages that occurred in California were not recognized by the federal agencies and most states. They were equal unions in name only.

Thus to argue that the return to civil unions makes these families "second class" is to ignore the fact that they were not equal. Instead, like civil unions, California same-sex marriage was a step in an as-yet unachieved bid for equality.

Of course, the don't-make-us-second-class-citizens-by-changing-the-name argument drew blood. After all, in the May ruling, George had written that calling same-sex marriages something other than marriage constituted "significantly unequal treatment."

Thursday, he looked hurt as he told Minter he found it "remarkable" that Minter was focusing on "the nomenclature" instead of "the court's recognition of very important rights" for gays.

On the plus side, George's and the other justices' questions during oral arguments suggest that the court recognizes its obligation to respect the popular vote to amend the constitution.

On the down side, I think it's remarkable that so many politicians are willing to use the courts -- not persuasion, not the ballot -- to thwart the will of Californians.

Justice Ming Chin, who had voted with George in May, asked anti-8 attorney Michael Maroko if the answer was to get rid of marriage altogether. Get it: Have the states license civil unions for all, and then leave it to churches to bestow the title of marriage. Chin was not the only justice to suggest this split- the-baby compromise.

To which, Maroko responded, "If gay couples don't have the right to marry, then straight couples shouldn't either." I believe the argument that gay marriage doesn't destroy straight marriage. Now I learn that if there is no same-sex marriage, activists want to destroy heterosexual marriage.

Do the Proposition 8 opponents not understand that California voters are likely to pass a measure legalizing same-sex marriage -- unless voters believe that gay rights threaten other rights? Like the right to self-governance.