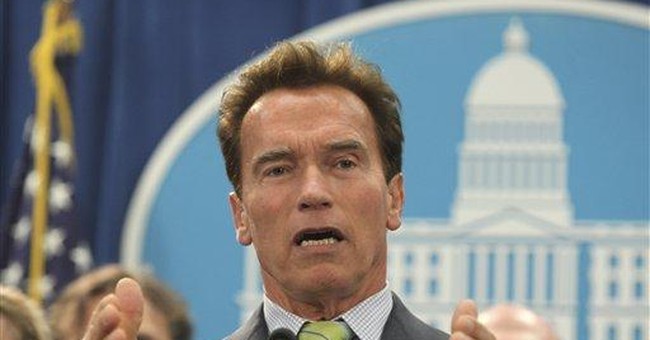 His Receivership wants to spend $8 billion to build seven new hospitals, each the size of 10 Wal-Marts, which would create "a holistic environment," with "music therapy, art therapy and other recreation therapy functions," a music room, stress-reduction room, game room and "therapy kitchen," with lots of natural light and high ceilings. A gymnasium would feature a "full-size high school playing court with basketball hoops and built-in edge seating up to four rows deep. Various floor striping allows for other games, such as volleyball, etc. Other sport activities include handball courts, exercise, and (a) workout room."

"The overarching value" of Plan Kelso is to create "a health care facility that cares for prisoners as patients and not a prison that cares for health care needs as inmates." No surprise: The California Department of Corrections and Rehabilitation estimates the annual cost of operating these facilities to be between $170,000 and $230,000 per inmate.

The amazing part: California politicians were going along with the plan until Wednesday, when Gov. Arnold Schwarzenegger and Brown filed a motion asking U.S. District Court Judge Thelton E. Henderson to replace Kelso with a special master.

Like hell, His Receivership's plans were paved with good intentions. When Henderson stepped in, he wrote in 2005, California's prison medical care system was so broken that "an inmate in one of California's prisons needlessly (died) every six to seven days." Henderson found that in some facilities, hygiene was optional and staffers were substandard. A San Quentin dentist wouldn't even wash his hands or change gloves between patients. I'm tough on crime, but that's criminal and unacceptable.

Henderson's remedies, however, have had their problems, as well. The first receiver, Robert Sillen, once threatened to "back up the Brinks truck" to the state's treasury to bankroll better inmate care -- and he clearly meant it. Sillen was paid $775,790 in the 15 months, ending in June 2007. An audit found no fraud, but it found that Sillen authorized $218,790 in overpayments to staff members for such benefits as health insurance and retirement that they already had received.

Henderson fired Sillen and then hired Kelso, who set his own annual salary at $224,000 -- plus a possible bonus. The Schwarzenegger-Brown motion complains that Kelso's "large staff and $74 million in administrative expenses" are duplicative and amount to a full-scale takeover of the state prison health care system.

In the meantime, health care spending per inmate rose from $7,601 per inmate in 2005-06 to $13,778 per inmate in 2007-08 -- an 81 percent increase and far above the average of $4,600 spent on health care per Californian. Kelso boasts of "an influx of new physicians and nurses" -- including 172 board-certified physicians, 488 registered nurses and 533 licensed vocational nurses -- in part because of big salary increases. The number of inmate deaths has fallen dramatically, from 124 in the first quarter of 2006 to 87 in the second quarter of 2008. The number of "preventable" deaths fell to three in 2007. At the news conference, California's corrections secretary, Matt Cate, credited the receiver for such improvements.

With all those gains, I wondered, doesn't that mean His Receivership can drop the building plans? Kelso thinks not. He told me over the telephone Thursday that he believes the $13,778 number is inflated by the inclusion of correctional officer salaries. Also, he argued that costs for dental and mental health -- which he took on to help the Corrections Department -- drove up the costs. If he eliminated mental health, he could reduce the up-to-$230,000-per-inmate estimate substantially. And come to think of it, maybe he'll throw mental health back to the state.

I think the "holistic" language was a mistake. He countered, "You're right about that." Kelso rightly closed in noting, "These people are not animals" -- and doctors should treat them as patients. But his operation is completely out of touch with fiscal realities. As state Finance Director Mike Genest noted, with Schwarzenegger trying to fill a $41.6 billion budget hole, "We're having to cut back everywhere." But Kelso is all plus signs.

And His Receivership doesn't quite understand the population he serves. The yoga/music therapy/handball/landscaping -- that's right, I forgot to mention the landscaping to give facilities that retreat feeling -- approach fails to recognize that 47 percent of California's inmates are repeat violent offenders.

Noem Slams Biden for Hypocritical Rules Surrounding 4th of July Fireworks
Landon Mion
Project Veritas: Here's Why Fox Corp. Allegedly Muzzled One of Their Reporters
Matt Vespa
Illinois Rep. Elects Not to Censure Marjorie Taylor Greene Following Her Apology for Holocaust Comparison
Landon Mion
So, Will Liberals Go Ballistic When They Figure Out Which Trump Positions Biden's DOJ Intends on Defending?
Matt Vespa
'Shut the F**k Up': Hollywood Actor Has Zero Patience for the Cancel Culture Mob
Matt Vespa
A Group Of Parents Sent Their Kids' Face Masks To A Lab For Analysis. Here's What They Found
Scott Morefield