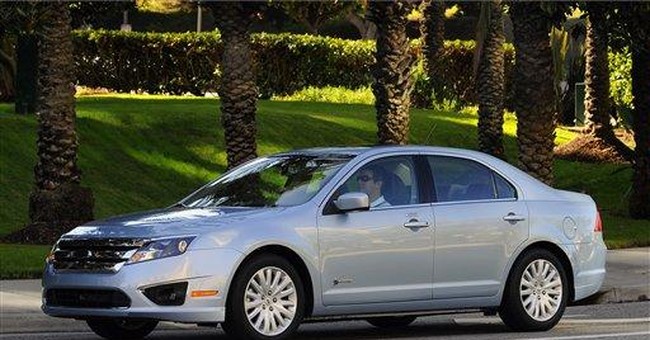 For lo these many years, the Democratic motorcade class has scolded American workers for driving gas-guzzling cars. Now that Americans have begun driving more fuel-efficient cars and driving less, how have the finger-waggers reacted? No, they are not planning a parade -- they already are working on a new tax on miles driven to make up for lost gasoline-tax revenue.

With the help of a six-year, $2.1 million federal grant, Oregon Gov. Ted Kulongoski is moving forward with a proposal to tax Oregon drivers for the miles they drive. "As Oregonians drive less and demand more fuel-efficient vehicles, it is increasingly important that the state find a new way, other than the gas tax, to finance our transportation system," Kulongoski told the Albany Democrat Herald.

Why not simply raise the gas tax so that Hummer owners continue to pay more than drivers of four-cylinder put-puts?

"It's very difficult to raise the gas tax when the price of gasoline is so volatile," answered James Whitty, Kulongoski's point man on the Oregon Mileage Fee Concept. (In lieu of the term "concept," many Oregonians might prefer to substitute the word "squeeze.") Politically, Whitty explained, raising taxes has been untenable in Oregon and on Capitol Hill since 1993.

In November 2007, a task force released the findings of the Road User Fee Pilot Program. Guess what: It found that a road tax has more advantages than disadvantages. In that self-congratulatory tone perfected by bureaucrats who have succeeded in finding what they always planned on finding, Whitty noted in the report, "The Oregon Department of Transportation concludes that the Oregon Road User Fee Pilot Program tested the critical elements of the Oregon Mileage Concept and yielded the result -- Concept Proven."

Not so fast, buckaroo.

If the goal of the green brain trust is to reduce gas consumption, then Oregon shouldn't dump a tax that punishes guzzling and replace it with a tax that dings Hummers and hybrids alike. (Whitty noted that the state could choose to charge gas-burning wheels more per mile than itty-bitty cars. Hello. That's what the gasoline tax already does.)

Whitty believes that the state should prepare for the day when 100-mpg vehicles and electric cars dominate the road. Oregon, he noted, boasts the country's highest ratio of hybrid cars -- 30,000 out of 3.8 million vehicles. With oil trading below $50 per barrel, there would be less incentive to buy a hybrid -- yet the green trust is busy working on another reason to not buy a hybrid. Some critics have privacy issues with under-the-hood transponders that could track where a car travels. No worries, the 2007 paper asserts the Oregon plan "protects privacy. Places driven cannot be revealed nor are they stored."

Maybe the pilot program was set up that way. But Whitty told me the transponders are supposed to track out-of-state driving. And down here, where I get a regular bill with the dates and times for when I paid to cross the Bay Bridge, it's hard to imagine that after built-in transponders are standard in every new auto, nanny state governments won't come up with a menu of behaviors beyond driving too much -- as in, driving in cities, driving during rush hour -- to enable states to levy extra taxes.

Follow the money and the red flag. The road-tax report gushes about how mileage transponders can be used to implement "congestion pricing" -- by adding fees for driving in urban areas or during rush hour. Think the London program that charges motorists $15 per day to drive in the central city. Our Betters in Europe like it -- so of course, Davos-happy solons from American cities (San Francisco, New York) want their subjects to support this pricey trend.

Robert Poole, director of transportation studies at the Reason Foundation, thinks a congestion tax makes sense for London and "probably makes sense for Manhattan." But: "There's not enough congestion on the streets of San Francisco to make congestion pricing a solution to a real problem. It's a solution looking for a problem."

My big fear isn't being tailed by a black helicopter on my way to the grocery store. My fear is that that enviro do-gooders will use this unnecessary road tax to devise new busybody regulations just to keep me out of my car -- when gridlock, the cost and stress already serve as disincentives.

My fear is that my tax dollars will be used to bankroll a scheme to punish me for using roads my tax dollars already paid for, because some day I might own an electric car.