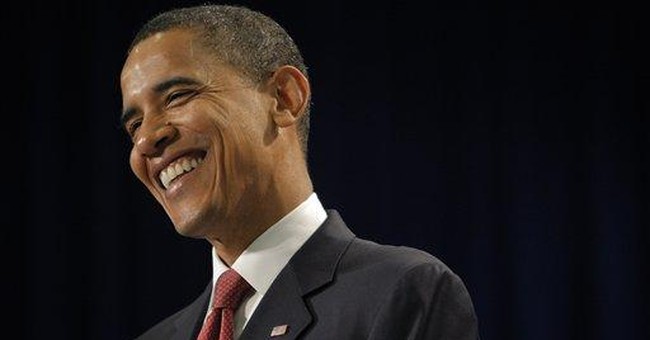 When Barack Obama addressed the National Council of La Raza on Sunday, he pandered when he said America's immigration system "isn't working ... when companies hire undocumented immigrants instead of legal citizens to avoid paying overtime or to avoid a union; when communities are terrorized by (U.S. Immigration and Customs Enforcement agency) raids -- when nursing mothers are torn from their babies, when children come home from school to find their parents missing, when people are detained without access to legal counsel."

When Obama accuses the men and woman who administer federal laws of viciously tearing nursing babies from their mothers' breasts and abandoning young children, his words eerily echoed a 1995 NRA fundraising letter that claimed that a federal ban on some semi-automatic weapons "gives jack-booted government thugs more power to take away our constitutional rights, break in our doors, seize our guns, destroy our property, and even injure or kill us."

As happens, Obama was trying to have it both ways. The Change Candidate started off criticizing a system that failed to stop employers from hiring illegal workers. Then in the next breath, he slapped ICE officials for making arrests at workplaces believed to flout the law.

And to get there, he trashed the very people who risk their safety enforcing laws enacted by the people's representatives.

Or as U.S. Attorney Joe Russoniello noted, "Criticizing law enforcement officers for carrying out their sworn duty is unfair." After all, "they didn't create the crisis."

ICE spokesman Tim Counts sent me this response to Obama's remarks: "Our procedures for addressing humanitarian issues, including child-care situations, go far beyond what any other law enforcement agency has in place. We routinely conditionally release parents so that they can care for their children. We have great compassion for the children involved. Quite simply, however, parenthood does not make you immune from having to comply with the nation's laws, and the responsibility for any family disruption lies squarely with the violator."

I read the Obama quote to John Trasvina, president of the Mexican American Legal Defense and Educational Fund, and asked: Is the situation that bad?

"Sometimes the fear is worse than the reality," he answered. People panic when being caught means deportation, and losing whatever lives people have built here.

I hear that if children are left alone after ICE arrests, it is often because parents lie to agents. Sometimes parents lie, Trasvina answered, because "they are so afraid that if they disclose where they live, their children are going to get deported, too."

Trasvina does not support ICE's targeting of scofflaw employers because the workers, more than the employers, pay the price. Instead, ICE should concentrate on illegal immigrants with serious criminal records: "That would keep them very, very busy."

No matter who the target is, they'll cry foul. You see, even if agents are looking for the worst offenders, they have no choice but to arrest every illegal immigrant they encounter.

And for that they get called every name in the book -- even by men who help write the laws.