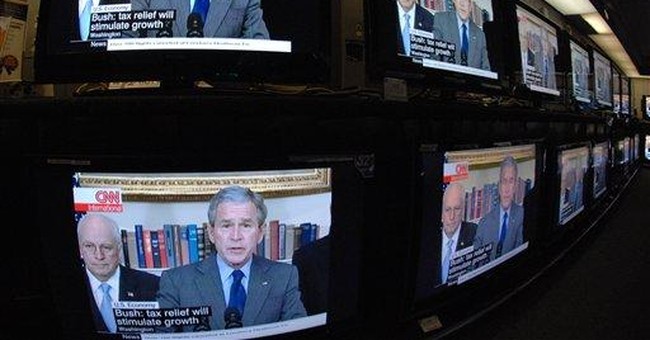 Few economists seriously believe that an economic stimulus package (at least those being discussed in Washington and on the campaign trail) would have much positive impact on the lagging economy.

There are two basic reasons for that: first, economic slowdowns are notoriously hard to predict and begin long before their effects become obvious to the political class or even economists; second, even the most timely and best tailored economic stimulus packages usually take effect too late to have any real impact on the sluggish economy, and thus usually only provide a minor bump to an already recovering economy.

Some economists even argue that such government interventions do more economic harm than good—especially if they are aimed at mitigating the effects of an economic imbalance in the process of righting itself.

Because of this, all the current talk of economic stimulus is more political posturing than anything else. Economic stimulus packages serve a symbolic role, proving that the political class cares about the economic pain that Americans are feeling (or fearing), but do precious little to actually address the underlying economic realities that have caused the economy to slump.

The frustration that free market economists feel when talk turns to government intervention to soften the blow of economic realities reflects their tendency to focus on the intricacies of public policy and their deep commitment to using reason to guide governmental action. Those commitments, however admirable, often neglect to acknowledge the fact that public policy is necessarily a result of real-world politics, which is primarily driven by responding to the hopes and fears of the electorate.

Politics, in other words, is often as much about symbolism over substance, emotion over reason. People approve or disapprove of politicians, and thus vote, based more upon “gut” feelings about the intentions and character of politicians. It is the rare voter indeed who understands the various complexities of various policy choices.

Does this mean that we are doomed to seeing an economic “stimulus” package that will achieve no real good, and may in fact do real harm to the American economy?

Not necessarily. While the major substance of what is being promoted today—substantial rebates in the form of checks mailed directly to voters, combined with some economic window dressing—will achieve nothing to stimulate the economy, it certainly is possible to put together a package that could do some real good while satisfying the political need to appease voter fears.

What would such a package look like? It would have to be based upon economic policies that would be good for long-term growth in the real economy. Some ideas would include making permanent the Bush tax cuts, reducing the Capital Gains tax rate, reducing corporate income taxes (America’s are among the highest in the world), raising the limits on tax-free saving and investing, eliminating taxes on dividends, and perhaps increasing the per-child tax credit in order to generate a more immediate benefit to consumers.

Job creation and productivity growth are the engines that keep our economy moving, and anything that promotes these will be good for the economy in both the short and long term. One of the virtues of a stimulus package like this one is that it would make sense whether we were going into a recession or not.

Unfortunately, there is no magic formula to repeal the business cycle. The recession the American economy may be facing is a natural result of imbalances in the credit markets that developed over the past few years, and nothing that policymakers do now will be able to undo the damage that was caused.

By pursuing policies that strengthen the overall economy, and pushing them as a stimulus package, politicians can serve two complementary purposes: demonstrating that they “care” about middle-class anxieties about the economy, and implementing policies that are good for long-term economic growth.