The Most Enduring Legacy Of Nazi Hate 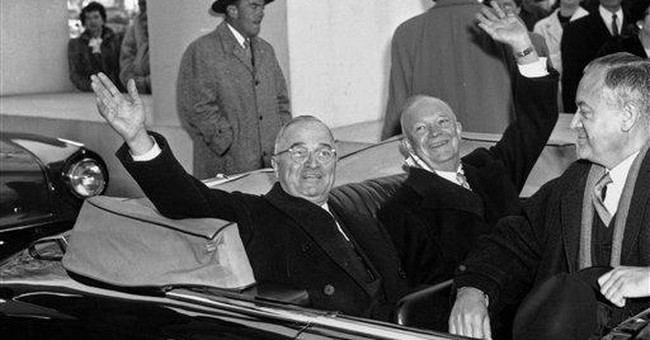 On February 1, 1944, two unlikely allies in the United States Senate—Robert Wagner (D-New York) and Robert Taft (R-Ohio)—introduced a resolution that caused shockwaves around the globe. Their initiative advocated American support for “free and unlimited entry of Jews into Palestine for the creation of a Jewish commonwealth.” This was a bold move and one that put the Roosevelt administration on the spot.

Nearly five years earlier, the British government had released a White Paper on the issue of Palestine—one that largely abandoned the Jewish people in that region. Since the 1917 Balfour Declaration and during the period of the British Mandate they had been largely supportive of Jewish migration to Palestine and the idea of a Jewish state there. In essence, the White Paper changed all of that. It advocated severe limitations on Jewish immigration to Palestine—this at a time when European anti-Semitism was reaching critical mass.

The gang in Berlin was pleased.

Interestingly, at the time of that 1939 White Paper, two men who would later strongly support the creation of the modern state of Israel saw things differently. Winston Churchill spoke to the House of Commons on May 22, 1939 “as one intimately and responsibly concerned in the earlier states of our Palestine policy,” and insisted that he would not “stand by and see the solemn engagements into which Britain has entered before the world set aside.”

And here at home, Senator Harry S. Truman from Missouri—who had no clue at the time that he’d be a major player on the world stage in a few years--also issued a forthright condemnation that was inserted into the Congressional Record:

“Mr. President, the British Government has used its diplomatic umbrella again,” (this being an unmistakable dig at Neville Chamberlain) “…this time on Palestine. It has made a scrap of paper out of Lord Balfour’s promise to the Jews. It has just added another to the long list of surrenders to the Axis powers.”

But instead of embracing the ideas put forth by Taft and Wagner in 1944, the White House, State Department and other powerful entities in the government pulled out all the stops to make sure that the idea of proposing a homeland in Palestine for Jews went away. They did this even though they knew very well about the ongoing mass extermination of European Jews at the hands of the Nazis.

The standard answer to the obvious question as to why the Holocaust evoked little official response from our government until near the end of the war has been to cite “isolationism,” or “economic Depression,” or “xenophobia” in our nation. Presumably, the idea of doing anything overtly “pro-Jewish” was politically untenable—so goes the argument.

But a closer look reveals something else going on at the time—and ever since.

The most lasting legacy of the toxins that created an epochal global conflict is the fact that elements of Nazism in many ways survive to this day in Islamism. The short-sightedness of FDR’s cronies was corrected in part by his successor, a man of courage who chose to recognize the new State of Israel eleven minutes after its birth in May of 1948. But the question remains: Why did FDR and company not get on the bandwagon, even while millions of Jews were being slaughtered?

Sadly, the real reason has a lot to do with U.S. surrender to Nazi propaganda—its power and content.

Largely overlooked or dismissed in the years since is the fact that the Nazi propaganda machine, the distortion factory that shaped attitudes in Germany throughout the duration of the infamous Third Reich, had its most lasting impact far away from the boroughs and beer halls of Deutschland. In fact, Hitler’s nightmarish vision of ridding Europe of Jews was only the beginning of what he wanted to do—he wanted to extend The Final Solution to Palestine.

And he had been preparing the hearts and minds of the Muslim world for many years.

Jeffrey Herf, a professor of history at the University of Maryland, has written an eye-opening book about the effectiveness of Nazi ideas in the Middle East during the Second World War called, “Nazi Propaganda for the Arab World.” In it, he describes the Nazi campaign for the minds and hearts of the Arab world in great detail—particularly the Axis radio programs that ran in Arabic around the clock from late 1939 until March of 1945.

These broadcasts spewed venomous anti-Semitism and pushed every demagogic button imaginable. They were also highly effective. In fact, long after the last vestige of Nazi rhetoric faded from consciousness in Europe, the poisonous seeds planted back then are still bearing deadly fruit.

The mind-set that gave way to the Third Reich is very much alive and well in the Muslim world of the Middle East.

When those two senatorial strange-bedfellows offered their visionary resolution in 1944 about a Jewish homeland in Palestine, the “Axis Broadcasts in Arabic” were way ahead of the story. Mr. Herf has accessed a significant cache of transcripts and leaflets produced by the Nazis during the war—materials that have not been adequately examined—until now.

So back in 1944, any hopes a couple of well-intentioned voices in Washington might have had to garner widespread national support for a Jewish homeland in Palestine were dashed by forces largely influenced by the hate-speak of Nazi propagandists. Berlin, broadcasting in Arabic, referred to Taft and Wagner as “criminal American senators,” while announcing, “a great tragedy is about to be unfolded, a great massacre, another turbulent war is about to start in the Arab countries.”

And in phraseology that sounds eerily familiar to what we still regularly hear from Islamists, the Nazis described the stakes as kill or be killed:

“Arabs and Moslems, sons of the East, this menace threatens your very lives, endangers your beliefs and aims at your wealth. No trace of you will remain. Your doom is sealed. It were better if the earth opened and engulfed everybody; it were better if the skies fell upon us, bringing havoc and destruction; all this, rather than the sun of Islam should set and the Koran perish...Stir up wars and revolutions, stand fast against the aggressors, let your hearts, afire with faith, burst asunder! Advance your armies and drive out the menace.”

Bear in mind that this is a Nazi broadcast to the Arab/Muslims in Palestine. Of course, the relationship between Hitler and Haj Amin al-Husseini, the Grand Mufti in Jerusalem, is well known and documented (see my article: “Hitler’s Favorite Jihadist”), but the broadcasts from Berlin to Palestine are just now beginning to be examined. And what is being found is further evidence that to refer to Islamists as Nazi or Fascist-like is no smear—or stretch.

The rhetoric broadcasted to the Middle East 70 years ago is still being noised about—and even more pervasively and effectively. Back then, the attitudes it reinforced, complete with distortion, hate and prejudice, caused U.S. officials, from FDR on down, to “go wobbly”—as Margaret Thatcher would say.

It is sadly clear that the most lasting impact of the Nazi propaganda machine is that murderous ideas espoused back then are alive and well in our day and age and still being used to threaten and kill Jews—while nouveau wobblers turn away.