David Limbaugh
|
Posted: Mar 31, 2017 12:01 AM
Share   Tweet
The opinions expressed by columnists are their own and do not necessarily represent the views of Townhall.com. 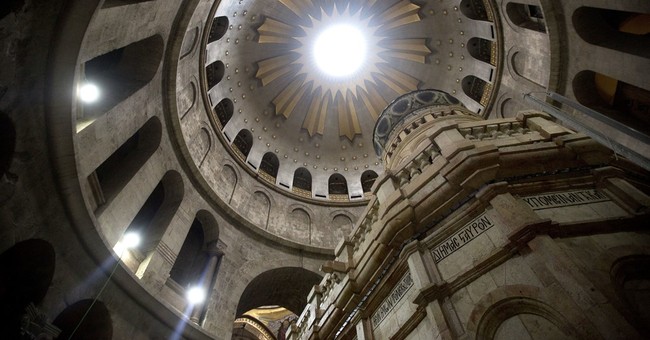 I have wanted to visit the Holy Land for years and I am finally here. The experience is, as promised, exceeding my enormously high expectations. Finally, I can use the word "awesome" correctly and without exaggeration!

This is a 10-day tour organized by Living Passages and led by my friend, Christian apologetics author and speaker Frank Turek, of CrossExamined.org. We are visiting mostly Old Testament-related sites on the first part of the trip and those of the New Testament on the second part.

There are 35 of us in the group, and we are traveling from site to site on a bus with Israeli tour guide Eli Shukron, an accomplished archaeologist whose prominent Jerusalem discoveries include the pool of Siloam and tunnels under the City of David. Eli has a passion for making the Bible come alive by explaining the geography, history, and biblical significance of the sites we are touring. Turek is complementing these teachings with his unique biblical and apologetic messages.

One thing that greatly distinguishes the Bible from other ancient religious texts is that the historical events and geographical locations it describes can often be verified. Let me just share a bit about the major locations we've visited in the first few days of our journey.

As we flew into Tel Aviv at midday, I was taken by the beauty of the land. We spent our first night in Ashdod, Israel's largest port, located on the Mediterranean coast. Ashdod is where the Philistines took the ark of the covenant after they defeated the Israelites. The first book of Samuel relates that they placed the ark in the temple of their god Dagon and set it beside Dagon's statue. The next morning, the statue fell face downward before the ark, evidencing God's judgment on the Philistines for stealing the ark.

The Lord also afflicted the people of Ashdod with tumors, convincing them to return the ark to the Israelites after having it only seven months. They returned it by cart to the Israelite city of Beth-Shemesh, east of Ashdod. Our group traveled from Ashdod to Beth-Shemesh, where we visited the excavation of Khirbet Qeiyafa nearby. Here we walked through the impressive ruins of a well-planned, fortified urban city established during the time of King David (circa 1000 B.C.), which has been validated by carbon dating and pottery of that period.

Archaeologists also discovered miniature structures that looked like Solomon's Temple and might have been models for the future temple. This city is believed to be the biblical city of Shaaraim (1 Sam. 17:52), which means "two gates." Our guide, Eli, was animated in showing us both the eastern and western gates, which were clearly detectable even today. Large parts of the stone foundations of many houses within the city walls were still in place. From the high vantage point of the city we looked down on the valley of Elah, where David killed Goliath (1 Sam. 17). It is moving to stand in the very spot where these historical events occurred and it gives a richer significance to the biblical accounts.

We next visited the active archaeological site Tel Mareshah, where we were invited to participate in the dig. One member of our group discovered an oil lamp dated around 300 B.C.

From there we went to the site of the ancient city of Lachish, which was originally conquered by Joshua and later was second only to Jerusalem in strategic importance to Judah, whose king, Rehoboam, fortified the city for the defense of his kingdom (2 Chronicles 11:9).

The Assyrians had already conquered the Northern Kingdom of Israel in 722 B.C. and had their sights set on the southern kingdom of Judah. Accordingly, Assyrian King Sennacherib invaded Judah and conquered Lachish in 701 B.C. He memorialized this victory with a series of reliefs that he had carved on his palace walls in Nineveh, which depicted the siege and capture of Lachish (2 Kings 18:14, 17; 19:8; 2 Chronicles 32:9; Isaiah 36:2; 37; 37:8; Micah 1:13). Those reliefs are now in the British Museum.

When Sennacherib put siege to Jerusalem, as the Bible says, he couldn't overtake the city. While not claiming victory, Sennacherib bragged that he had Judah's King "Hezekiah caged like a bird" on the ancient Taylor Prism found in Iraq in 1830. This Prism is also in the British Museum and is verification of another event in the Bible.

It is difficult to express the majesty of these ancient areas and to adequately explain their profound impact. Though I have read and studied the Old Testament, I can't begin to describe how much more meaningful its stories are after walking the grounds on which they unfolded. We have barely begun our journey and it is already the trip of my lifetime. Nothing else compares. In a later column, I'll tell you about the New Testament sites we visit.