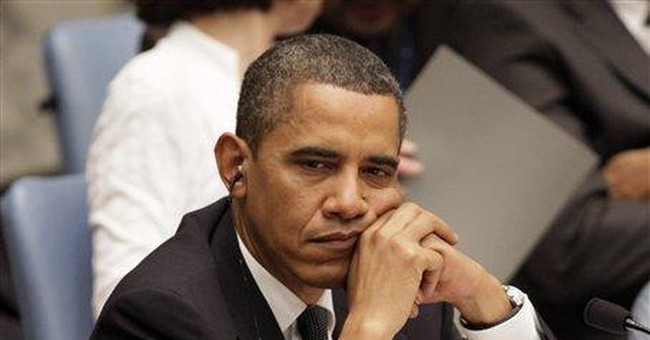 Sen. Jim DeMint predicted that Obamacare would be President Barack Obama's Waterloo. While that's certainly a strong possibility, Obama has other Waterloos in the wings competing for the prize, such as his monstrous deficits and his disastrous foreign policy.

The Heritage Foundation reports that Obama's budget would produce $13 trillion in deficits over the next decade, even more than the outrageous $9 trillion previously projected. This is nation-shattering stuff, folks, and Obama and his minions remain unflappable, intent on staying the bankrupting course, sporting Alfred E. Neuman, "What, me worry?" expressions. The fact that we know they can't be that oblivious is what makes us wonder whether something more sinister lurks in their motives.

But Obama's foreign policy is shaping up to be every bit as dangerous. Because he has lived in a relatively cloistered political world -- surrounded and shielded by mostly fellow leftist radicals -- he apparently doesn't realize just how repugnant his appeasement policies and mantralike derision of this nation are to most Americans.

When I first heard that he was Mirandizing al-Qaida on the battlefield, I thought it was political satire. But it wasn't, any more than his scrapping of long-range missile defense or his apparent plan to unilaterally disarm us of our nuclear weapons.

Then there's Afghanistan, which Obama and his fellow Bush-hating Democratic machine exploited merely to bludgeon Bush on his Iraq policy. It was transparently obvious that this appeasement bunch wasn't serious when they said they wanted to ramp up our efforts in Afghanistan and evacuate Iraq because the former was supposedly part of the war on terror and the latter was not. The political strategy was simple: Let's vent our anti-war spleen on Iraq under cover of beating the war drums on Afghanistan.

Once elected, though, Obama had to fish or cut bait on Afghanistan. For a while, it looked as if he was going to fish, but recent events have vindicated my earlier suspicions about his and the liberal establishment's commitment to that war. Even though he is being urged by top brass to send 40,000 more troops -- without which we may lose that war -- he is vacillating, seeking the counsel of Ivy League doubters who'll tickle his liberal ears and justify a policy reversal. No matter which way he goes, it's plain to see now that his Afghanistan campaign rhetoric was mostly a lot of empty, opportunistic talk.

But we now know that one line of criticism Obama and his fellow "one-worlders" constantly leveled against President Bush truly was heartfelt -- as unjustified as it was: Bush alienated the world with his "unilateralist, go-it-alone" approach. Obama clearly wasn't just spewing that bilge as a political weapon. He believes it, as evidenced by his reprehensible ongoing world apology tour and, most recently, his already infamous speech to the United Nations General Assembly.

If you had any doubt before, you cannot reasonably have it now: Obama believes America has been a very bad actor on the world stage and has much to atone for. Conversely, he sees little good in the unprecedented benevolence of this super-empire over the years. And some of you wonder why we think he's got a chip on his shoulder against the country he leads?

Within the first minute of his talk, he noted approvingly that when he took office, much of the world viewed America "with skepticism and distrust." While he implied some of this perception was unjustified, he said straightaway, "America has acted unilaterally, without regard for the interests of others. This has fed an almost reflexive anti-Americanism." Oh, man.

He proceeded to tell those present, a good chunk of whom hail from thugocracies, that we share common interests. Well, speak for yourself, Mr. President.

Then he bragged that he had prohibited our use of torture and ordered Gitmo closed -- thereby conceding to the world the disputed and, I believe, absurd proposition that we had indeed systematically tortured and abused enemy prisoners. Next, he boasted that he had begun to withdraw troops from Iraq, thus sending the unmistakable signal that we were wrong to have attacked Iraq in the first place. Again, speak for yourself, Mr. President.

Equally troubling is his intention to disarm the United States of its nuclear weapons in a time when rogue nations are irreversibly committed to acquiring them. He has to know his pledge is either a pipe dream or a prescription for America's national suicide.

Obama also spanked America for dragging its feet on environmental issues and promised that under his enlightened leadership, those days are over.

One thing is clear to me: Obama either has no clue how out of touch he is with mainstream America or simply doesn't care. But the more he opens his mouth on foreign policy issues the less secure Obamacare will be in the race among his various destructive agenda items to destroy his popularity and his presidency.