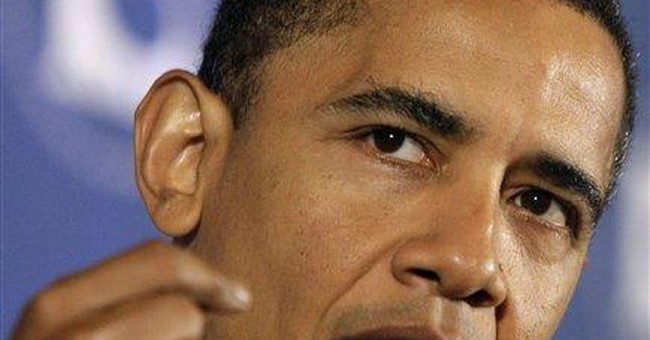 Be afraid; be very afraid. If you think Barack Obama is arrogant and leftist, you ought to see those he will have to cater to if elected -- and, according to them, even to get elected in the first place.

These leftist "netroots" are none too pleased with Obama's feint to the center the past few weeks, his "capitulation" on retroactive immunity for telecoms for cooperating with the government to monitor terrorist communications, his alleged disagreement with the Supreme Court for invalidating the death penalty for child rapists, and his flip-flop on the D.C. handgun case.

They are abuzz about the messiah's apparent abandonment of their orthodoxy. Interestingly, though, not many of the complainers really believe Obama has left them. Like Obama's longtime pastor, Jeremiah Wright, they realize Obama is quite willing to mask his inner self to get elected. But many are disgusted that he's even playing the game.

One blogger at The Huffington Post writes: "Sen. Barack Obama is risking his brand as a political reformer, according to reports today in the Los Angeles Times and the Washington Post. In recent weeks, he has moderated or changed positions on a number of politically-charged issues, leading to criticism from demoralized Democratic activists."

Will Marshall, president of the Progressive Policy Institute, added, "I've been struck by the speed and decisiveness of his move to the center."

But these leftist types are so puffed up in their certainty that liberalism rules today that they think even as a matter of electoral strategy Obama would be better off coming all the way out of the closet and confessing his far-left propensities. They think Obama can safely blow off swing voters because just energizing the leftist base will increase turnout enough to ease him to victory. They even believe, in the words of the same Huffington Post blogger, his shift to the center could jeopardize his chances by "depressing the enthusiasm of the voters who clinched the nomination for him."

And what do these leftist sweethearts have in store for us if Obama prevails? Hint: It's not just Republicans who should be worried. If they have their way, the Obama leftists will purge from the Democratic ranks conservative, or blue-dog Democrats, who are just getting in the way.

Marshall Grossman tells us: "When the Republican bogeymen and bogeywomen are gone -- in just a few short, summer months -- the political scene will shift. The blue dogs will be the new Republicans and we, the people, will hold the newly elected feet to the fire. Incumbent and unresponsive conservative Democrats will have to begin looking over their left shoulders."

Jason Rosenbaum writes: "Once Obama is elected, it's war. November is just the beginning." Rosenbaum will "work to rid Congress of conservative, Blue and Bush Dog Democrats, and build up long-term progressive infrastructure." (Are you self-professed conservative Democrats paying attention?)

What this all means, at the very least, is that voters need to keep their eye on the big ball here -- and the big ball is not Obama's political cynicism, which far too many will dismiss as acceptable Nixonian politics, engaged in by every politician. The big ball is Obama's real leftism -- and its potentially devastating consequences for the country.

Among those potential consequences, according to Rosenbaum and Grossman, are, "President Obama will start sending non-apocalyptic judicial nominees to Senate confirmation," like Justice Ginsburg, no doubt, and "the Department of Justice will once again be populated by folks who have read the Constitution," meaning those leftist lawyer types more concerned with al-Qaida's "constitutional rights" than yours or mine.

Further, "Democrats will be more likely to pass progressive legislation : ending the war," meaning surrender; providing "health care for all Americans," meaning poorer quality health care and long waiting lines for all but the very rich; causing "a renewed investment in our economy," meaning at some point, only about the top 40 percent of income earners will pay income tax at all; and bringing about "a renewed investment in green energy," meaning, to them, a radical assault on our economy in the name of the global warming hoax -- in deference to the pantheistic devaluation of the dignity of human beings that drives it.

Time will tell if Obama is as leftist as his voting record and past associations would indicate, but many of those most passionate about him seem rather sanguine about it.

So let's not just focus on Obama's increasingly evident character flaws, but the catastrophic restructuring he likely has in store for this nation and its institutions.