A Reason to be Skeptical 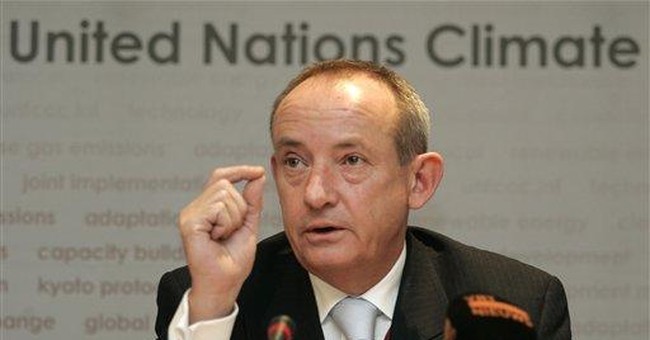 Who knows? In the long run, global warming skeptics may be wrong, but the importance of healthy skepticism in the face of conventional thinking is, once again, validated.

What we know now is that someone hacked into the e-mails of leading climate researchers at the University of East Anglia's Climatic Research Unit and others, including noted alarmists Michael Mann at Pennsylvania State University and Kevin Trenberth of the U.S. National Center for Atmospheric Research in Boulder, Colo.

We found out that respected men discussed the manipulation of science, the blocking of Freedom of Information requests, the exclusion of dissenting scientists from debate, the removal of dissent from the peer-reviewed publications, and the discarding of historical temperature data and e-mail evidence.

You may suppose that those with resilient faith in end-of-days global warming would be more distraught than anyone over these actions. You'd be wrong. In the wake of the scandal, we are told there is nothing to see. The administration, the United Nations and most of the left-wing punditry and political establishment have shrugged it off. What else can they do?

To many of these folks, the science of global warming is only a tool of ideology. To step back and re-examine their thinking would also mean -- at least temporarily -- ceding a foothold on policy that allows government to control behavior. It would mean putting the brakes on the billions of dollars allocated to force fundamental economic and societal manipulations through cap-and-trade schemes and fabricated "new energy economies," among many other intrusive policies.

We have little choice but to place a certain level of trust in scientists -- even when it comes to the model-driven speculative discipline of climate change. And, need it be said, most scientists take great care in being honest, principled and precise.

In the same way, a conscientious citizen has little choice but to be uneasy when those with financial, ideological and political interest in peddling the most over-the-top ecological doomsday scenarios also become the most zealous evangelizers.

As President Barack Obama heads to Copenhagen to work on an international deal that surrenders even more of our unsightly carbon-driven prosperity to the now-somewhat-less-than-irrefutable science of climate change, shouldn't he offer more than a flippant statement through a spokesman on the scandal?

The talks, after all, will be based on the U.N.'s Intergovernmental Panel on Climate Change's Fourth Assessment Report, which partially was put together by the very same scandal-ridden scientists.

Now, I do not, on any level, possess the expertise to argue about the science of anthropological global warming. Nor do you, most likely. This certainly doesn't mean an average citizen has the duty to do the lock step.

Yes, you apostates will be tagged "denialists" -- because skepticism is synonymous with the Holocaust denial, don't you know -- or some other equally unfriendly moniker.

Don't worry; you won't be alone. Gallup recently found that 41 percent of Americans now believe global warming news reports are exaggerated -- the highest number in more than a decade despite the fact that this time frame has coincided with concentrated and highly funded scaremongering. That number is sure to rise as soon as word of this scandal spreads.

The uglier the names get, the more anger you see, the more that science-challenged politicians push invasive legislation, the more skeptics will join you. True believers will question your intelligence, your sanity and your intentions.

But as ClimateGate proves, a bit of skepticism rarely steers you wrong. In fact, it's one of the key elements of rational thinking.