Maybe It Is a Time for Hope 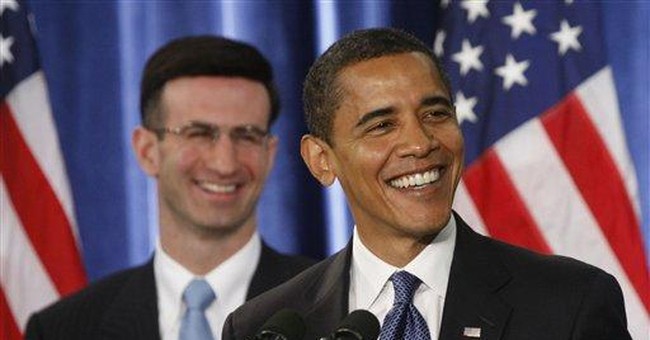 As we speak, brilliant pundits from across the nation are contemplating the entirely irrelevant question of whether we are a center-left or center-right nation. Who cares? Barack Obama is about to plunge us into a Marxist dictatorship, remember? Red bandanas? Re-education camps?

We are two months away from any real-time decisions or major initiatives offered by the Obama administration, so it is too early to render verdicts. Yet to this point, Obama has flipped predictable political thinking. It appears he may govern to the right of his campaign promises.

It truly is a time of hope.

Obama's campaign was a feast of platitudinous feel-gooderism and leftist populism. Yet judging from his recent economic appointments (Larry Summers, Tim Geithner), Obama's ears are open to pragmatic moderate types who aren't wholeheartedly on a redistribution-of-wealth kick.

Some high-profile progressive pundits quickly have taken to their keyboards and angrily have admonished Obama for neglecting a historic victory, and they have demanded a fulfillment of their, er, his mandate. Evidently, they haven't been paying attention.

So no one can blame progressives for getting antsy. When The Washington Post describes Obama's lead economic team as a group that "firmly believe(s) that limited government spending combined with free markets can create lasting prosperity," well, as Chris Matthews might say, that sort of thing can give fiscal conservatives a thrill up the leg.

And when William Daley, another key member of the Obama economic team, claims that because of serious implications of the present economic downturn, the president-elect is inclined toward allowing Bush tax cuts "for the wealthy" to expire in 2011 rather than repealing them (as he had promised), you realize campaign rhetoric is tons of fun but utterly meaningless.

Class warfare wins votes, but refusing to repeal Bush's across-the-board tax cuts is an implicit admission that tax hikes -- even if the rich happen to benefit from them -- hurt the economy. If not, why not repeal Bush's "tax relief" in favor of more "investments" (yes, a melange of euphemisms) Jan. 20?

Many economists believe that the burden of high taxes has a damaging impact on the economy. One of them is an economics historian at the University of California, Berkeley, named Christina Romer. And Romer was just tapped by Obama to head the Council of Economic Advisers.

So because we're in a hopeful mood, perhaps Obama is the leader we need to rein in spending and usher in a new age of fiscal responsibility. This is a theoretical discussion, after all.

"Politics is often backwards," Brian S. Wesbury, former chief economist for the Joint Economic Committee of the U.S. Congress, recently told National Review Online. "For example, only Richard Nixon could go to China, only Bill Clinton (or a democrat) could sign welfare reform, and only George Bush could introduce a hugely expensive new drug entitlement."

Fiscal conservatives lived through years of a Republican administration that spent massively, expanded entitlements massively and then offered massive bailouts. Perhaps the progressive wing of the Democratic Party will be similarly disappointed during the next four to eight years.

Indeed. It is a time of hope.