The End of Obama's Summertime Blues 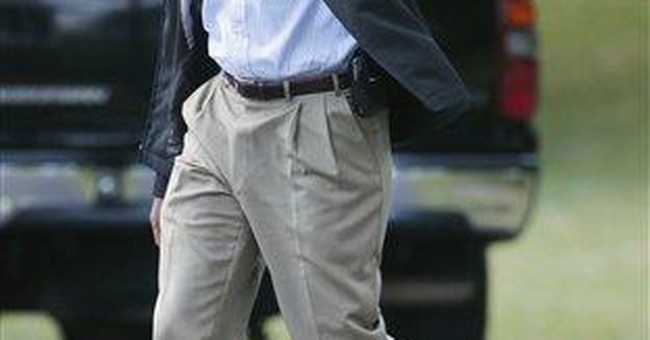 I started to write: “Having a wonderful time. Wish you were here.” But you know better. Being president isn’t fun and games like I hoped. And I really don’t wish you were here. I could use a friend, but I need the Wright stuff like I need Arlen Specter. This summer I’ve got enough grief. It turns out the crowds that shout my name aren’t always saying nice things. That gets old fast.

I should have guessed it wasn’t going to be a picnic when the chief justice couldn’t even get the oath right. That mistake was uglier than Aretha Franklin’s hat. Talk about bad omens…

But even so, the first part of the year went so well. We passed the stimulus package and taught those Republicans that elephants aren’t the only thing that never forgets. I didn’t even give them a chance to read that bill. They were too busy eating my dust.

I got $787 billion – $2,600 per person. Even the Daleys never paid that much for votes. I think some money doesn’t run out until my second term. Then I took over the car industry to keep the union boys happy. The funny thing is, with all the limos, I barely remember how to drive. But that’s power – the Chicago way.

Things were good, not great. Who knew so many rich folks couldn’t do their taxes? I’m glad Michelle takes care of all our money. I can always blame her if anything goes wrong.

Thankfully, the media made me feel welcome. It seems like every journalist in the country has applied for a White House job. We hired about a dozen. (Most are so unqualified, it’s hard not to laugh. Some of their resumes are as thin as mine.) But that didn’t matter.

Whether they got the job or not, every one of them tried to outdo the others in their praise. The New York Times is so nice, I had one of my staff remind them I was married, just in case. And I’ve been on so many Time magazine covers that Editor Richard Stengel wanted to know if I’d autograph one for every new subscriber. (One Conan O'Brien promo and everybody wants a piece of me.)

Instead of hitting the beach and having a fine Pinot grigio, I end up working on my bowling and downing beers in a west wing kegger. All because I go off script one time and speak my mind. From now on, I’m gluing that teleprompter to my hands. And take a tip from me, never let a committee pick your beer. You end up with a bottle of Bud Light. Ick.

The ebony and ivory summit was bad enough. Things really fell apart when we got to health care.

We did everything by the numbers. We looked at how the Clinton folks ran health care last time and we did exactly the opposite. I bought off everybody I could – doctors, pharmaceutical companies, NBC and more. If they couldn’t be bribed, they were bullied. Rahm’s specialty. We talked to everybody who mattered.

Except, I guess, the voters. Who knew they actually mattered any time other than in an election? It wasn’t my fault. I’ve barely run for anything in my life. But the whole town hall situation caught us with our pants down – oddly reminiscent of Clinton.

It just got ugly from there. Yelling, screaming, threats, protests. And that was from Democrats. Blue Dogs were angry about the public option. And progressives were angrier than Michelle was when Sarko and I checked out that Italian booty.

Now I’m stuck using Ted Kennedy’s death as a rally cry for “KennedyCare.” That only works if no one looks at the care he got – flying a private jet to the best surgery team in the country.

And forget all that anti-war garbage. I can already see the “Obama = Carter” bumper stickers. I can’t cut and run from Afghanistan so I had to use the best strategy. Just don’t tell anyone I stole it from GW. The left howled enough already. Cindy Sheehan actually protested my vacation, the little ingrate.

To keep the left happy, I let Holder do a Michael Vick on the CIA. Progressives always love that.

The high point of the summer? Getting Sonia Sotomayor confirmed? Hah. With 60 Senate votes, I should have been able to get Ron Jeremy confirmed. Now that’s power. “Wise Latina,” my butt. If she was so wise, how come she got caught on video? You don’t see my college days ending up on YouTube.

No, the only fun I really had all summer was speaking in Cairo and telling everyone that I’m “Barack Hussein Obama.” Can we annoy the birthers? Yes we can. Darn, now I have that song stuck in my head. If I hear the Black Eyed Peas sing “Yes We Can” one more time, I’m going to appoint a music czar and have the song banned. Give me some Barbara Mandrell any day.

Here’s hoping things change when Congress gets back. Not that hope and change ever made things better. Well, there’s always a first time.