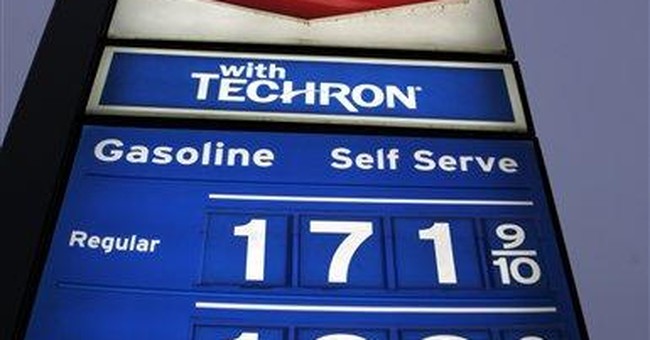 News by its very nature is unpredictable. Too bad many journalists don’t seem to understand that fact.

Ever since gasoline prices began a wild ride in 2004, the media have been obsessed with predicting future energy prices. Gasoline, we were told, would hit $5 a gallon. Or $6, or $7. Or maybe even $12 or $15.

The predictions were consistently wrong. ABC, NBC and CBS, who can seldom get current events correct, are even worse guessing future news. In fact, for most of 2008, network news stories that predicted oil or gas prices were wrong nearly two-thirds of the time (63 percent).

Two-thirds? You’d be better off flipping a coin or even counting on an NFL referee. Not one network report had guessed that gas would drop to $1.66, the current national average.

Journalists weren’t content with reporting high prices. They had to warn those prices would go higher – much higher. In 2008, they got their wish. Sort of.

Gas started the year near $3 a gallon and oil near $100. Network reporters hyped each daily increase -- $3.50, $3.75 and finally $4. CBS’s Ben Tracy told viewers in his March 10 broadcast of “the rude awakening that high gas prices are here to stay.” Other stories bemoaned the impact on truckers who had to cope with “over $1,000 a fill-up.”

But those stratospheric prices weren’t enough for journalists who live by hype. CNBC quoted Robert Hirsch, a Management Information Services Senior Energy Advisor, saying: “others who watch this very closely forecast that we're going to be hitting $12 and $15 a gallon, and then, after that, when world oil production goes into decline, we're going to talk about rationing."

ABC’s Charles Gibson zeroed in on the fear du jour on his July 11 broadcast. “We told you earlier that crude prices hit another new record today, which has analysts warning that $4 a gallon gas may become a permanent fact of life.” Gas prices began to decline just a week later and dropped below $4 a gallon before the month was out.

And they kept right on falling – for 86 days straight. Even media outlets desperate for doom and gloom should acknowledge that’s big news. Few reports did so. Instead, the networks tried to predict how low gas prices would go, which they also got wrong by underestimating the price collapse.

No one says predicting energy prices is easy. It isn’t. Every group that tried failed – oil experts, government officials and, of course, journalists. But that didn’t stop those same journalists from trying again and again. CBS warned of the “triple threat” of “falling home values, empty nesters returning to the city, and sky-high gas prices.” These were supposedly “driving suburbia to the brink.” Correspondent Ben Tracy warned of a suburban housing disaster by 2025 and that “there will be a surplus of 22 million large-lot homes in suburban areas.”

This oil and gas price information comes from a new study by the Business & Media Institute, which analyzed evening news 548 stories about oil and gas during 2008 from Feb. 11, when gas prices hit an early season low point, to the end of November. The results show that supposed experts were wrong both about how high prices would go and then the price collapse that followed.

It wasn’t just the predictions that were wrong, of course. Reporters ignored the impact of lifting the ban on offshore drilling. President Bush made that move on July 14, the day oil closed at its all-time high of $145. The steep drop started the very next day.

Journalists also chose to focus only on the bad news of energy prices. When prices were rising, newscasts were awash in oil and gas stories – 114 just in July. And rightly so. The cost of energy rippled through everything from food and travel to the stock market. One estimate said $1 on the price of oil meant $1 billion out of consumer pockets. But when those prices dropped, those issues were no longer important – even though that meant a savings of $100 billion. In November, as gas prices dropped to less than half their highs, there were just 26 stories.

One of the biggest national news stories of 2008 had ceased to become important because it became good news and the media were predictably absent.

OPEC is moving aggressively to increase the price of oil and gas prices might soon follow. Though it is hard to guess the future, I predict the media will continue to get gas prices wrong.

OK, some predictions are easier than others.