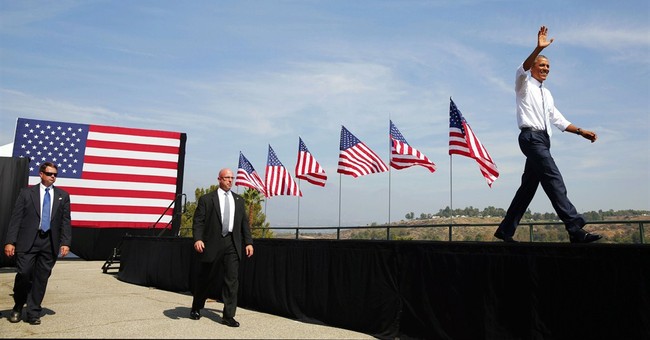 Where is President Barack Obama when you need him in a crisis? Pretty absent from the stage, unless he's pointing fingers (at Republicans), disavowing knowledge of "situations" such as Obamacare's website woes, the IRS scandal, and the horror show at Veterans Affairs -- or simply refusing to take responsibility by retreating from the world.

And amid the current Ebola crisis, the incumbent-in-chief is off fundraising, deftly avoiding the people he's supposed to be serving and protecting.

Last week, Liberian Thomas Duncan died from Ebola in Dallas at Texas Health Presbyterian Hospital. A nurse, who treated Duncan, now has Ebola. The Dallas hospital has shown Americans and the world how woefully unprepared the United States is to fight Ebola. What does President Barack Obama do? Demonstrate his audacity of incompetence and dereliction of duty to protect the American people by flying to Hollywood for his 53rd fundraiser of the year.

Thursday, the day after Duncan died, Obama attended a celebrity-studded, money-grab hosted by Gwyneth Paltrow. For the “paltry” price of $15,000 a person, any old average Joe could attend. (With income inequality top-of-mind, he wanted those of us peasants who don't have Ebola to be able to cough up a few bucks.)

As Ebola raged on in Dallas with more than 48 people being quarantined who came in contact with Duncan and 18 health workers monitored, who treated him, Obama hobnobbed with the rich and famous in Los Angeles.

This week, a 26-year old nurse who treated Duncan contracted Ebola. Now we have two cases of Ebola in the United States and the Centers for Disease Control and Prevention Thomas Frieden telling us more cases are possible.

Despite assurances from Frieden and Obama over a week ago, that the US had the situation under control and there was nothing to worry about.

“ . . .It is important for Americans to know the facts, and that is that because of the measures that we’ve put in place, as well as our world-class health system and the nature of the Ebola virus itself -- which is difficult to transmit -- the chances of an Ebola outbreak in the United States is extremely low.”

Uhm, let’s dissect these lies, shall we?

First, it’s clear the way Texas Health Presbyterian Hospital treated Duncan that America produces the most modern medicine in the world but has the most inept system of delivering it. When Duncan first arrived at the ER, he told the nurse he had been to Liberia. She entered notes in the hospital’s computer system, which the doctor who treated Duncan didn’t read. Instead he sent Duncan home with antibiotics.

Second, we know the hospital was NOT following CDC guidelines--whatever they are--for handling infectious diseases, because a nurse who treated Duncan has Ebola. The CDC concluded a safety breach occurred. No sh*t!

The story the federal government and our Commander in Chief is telling us isn’t adding up. Bonnie Castillo, Director of the Registered Nurse Response Network, a nurses union, told several media outlets America’s hospitals are not prepared and not educating nurses on CDC guidelines for putting on and removing protective gear.

Third, I wouldn’t call another person contracting Ebola within days of Duncan dying “difficult to transmit” or “a low risk to Americans.” If the risk is low, why did Frieden change his narrative from two weeks ago and now says we can expect more cases?

In fact Frieden announced the US needs to “rethink its approach to Ebola” and beef up training of health workers.

It’s time for our president to face the nation with a press conference where he and his leaders from “across agencies” address Americans and EXPLAIN “the aggressive steps” his administration “is taking to fight Ebola epidemic and . . .to make sure that we are doing everything we need to do to prevent an outbreak here in the United States.”

For starters, Obama needs to tell us what is his plan for containing and preventing the spread of Ebola HERE at home, in America. The CDC needs to explain how it's communicating with hospitals, spell out the prevention protocol procedures for health workers and tell Americans what we can do to prevent catching Ebola.

To win bonus points, Obama might consider taking questions from the media -- and supplying candid answers.

After listening to an October 4th show I hosted for WMAL radio, during which I discussed the US response to Ebola, a doctor who was head of an infectious disease prevention program at NIH for 19 years, emailed me. He indicated he helped develop containment procedures and laboratory equipment for retroviruses such as HIV, as well as developing the bio-hazard symbol, currently used throughout the world.

He added that he was “amazed experts” like Freiden emphatically keep insisting America can’t ban flights to and from West Africa. As Ann Randall wrote in the California Political Review, “Recall how swiftly the president grounded US flights to Ben Gurion during the Hamas terror attacks on Israel this past summer.”

His response: “The President has it in his power to curtail, by executive order, all air travel from West Africa to the US, including those individuals having U.S. visas. He should do so immediately. He should next use his persuasive powers to have World Health Organization impose a worldwide ban. The idea that this would do no good is ludicrous. Even if this prevents one additional infected individual from entering non-epidemic countries, it is worthwhile.”

While the current situation is manageable in the US, the doctor noted “if we have ten or twenty more cases we just don’t have sufficient CDC staff to send to manage sites. Most hospitals do not have the ability to decontaminate bedding and other contaminating material being generated by infected patients at their facility,” he cautioned.

It’s quite evident from what happened at Texas Health Presbyterian Hospital that hospitals in the US are woefully ill equipped to handle a virus like Ebola.