We live in a democratic country called America where we are given unalienable rights, individual freedoms and liberties to live our lives the way we deem fit. Americans have the freedom to choose what they say, write, their religion and which political party or movement they support: Republican, Democrat, Independent, Tea Party, etc.

But for black Americans the choice of political party appears predestined. It seems liberals but more specifically black liberals have carved in the ten black commandments that “thou shall never be a Republican.” These same black liberals also refuse to submit to the fact that not all blacks think alike.

With black conservatives like Congressman Allen West, Congressman Tim Scott and Republican presidential candidate Herman Cain debunking this insulting stereotype, many black liberals have resorted to racist name calling to protect the myth that Democrat policies help blacks. Cain has been target number one on their list.

Last week I wrote about DL Hughley's racist tweets about Cain only to be tipped off this week by a Twitter follower, who emailed me some racially charged tweets by black comedian Michael Colyar and CNN’s Roland Martin.

Colyar called Cain a “Modern Day Uncle Tom” and tweeted Cain “acted like Uncle Remus.” Both are fictional characters, who portray dutiful, docile slaves in Uncle Toms Cabin and Tales of Uncle Remus respectively. Both are considered demeaning, vile names to call a black person today. You can connect the dots but Colyar is reducing Cain to nothing more than a slave of the GOP, rather than acknowledging him as a black man with different political beliefs and ideas than Colyar. 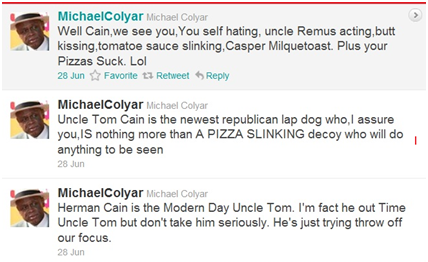 Roland Martin and some of his followers thought Cain needed a black intervention and if he ate some BBQ and listened to some black music along with attending a Million Man March, Cain would suddenly discover his true blackness and his “real home” in the Democrat party. 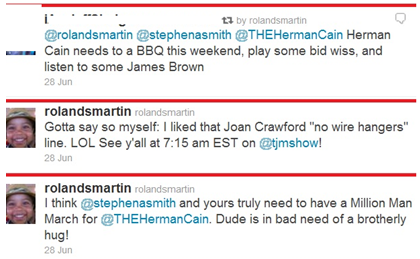 The irony of this is puerile, racist banter is that it really does make black liberals look like they are brainwashed and the Uncle Toms of the Democrat party. Each and every election cycle Democrats win the majority of the black vote because black liberals do not hold Democrats accountable for their policies or make them work for the so called “black vote.” No other race votes in such a huge majority for one party and no other race but black Americans are on an economic spiral downward due to the welfare policies started by Johnson’s Great Society and continued by today’s Modern Democrats.

Over thirty years ago, Daniel Patrick Moynhian researched and published The Negro Family: the Case for National Action focusing on the alarming rise in black poverty in American. Moynihan found two disturbing trends. First, an increasing number of black families were being headed by single women and “the family structure of lower class Negroes is highly unstable, and in many urban centers is approaching complete breakdown.” Second that: “The steady expansion of this welfare program, as of public assistance programs in general, can be taken as a measure of the steady disintegration of the Negro family structure over the past generation in the United States.” At the time of Moynihan’s report 23% of black births were out of wedlock today it’s a staggering 70%.

When you look at the statistics things just aren’t adding up for blacks and with black unemployment at 16.7% almost twice the national average. Maybe it’s time for black liberals to give a candidate like Herman Cain some thoughtful consideration rather than make him the butt jokes. As my mother says, you keep doing the same thing and you get the same results.